A new type of modular tile promises to help reduce flooding in cities hit by increased rainfall due to climate change. The streets of Copenhagen are to be the testing ground for the Climate Tile, created by Danish architecture studio Tredje Natur.

The Climate Tile is designed to be used alongside or instead of existing sidewalks. The tiles are peppered with a system of holes, tunnels and ridges and these facets function to collect and manage rainwater runoff, funnelling it away from sidewalks and towards its preferred use, for example, irrigating nearby plantings or watering grass grounds at sports fields, ovals and parks.

The tiles have been designed to supplement the existing drainage systems, and the idea is to ease the stress on sewers and stormwater systems at a time when some cities are experiencing record rainfall.

The added benefit to the Climate Tile system’s use of extra runoff water, that in so many places is simply going to waste, lies in the possibility of more plantlife being brought into and maintained in urban landscapes. Tredje Natur envisions the Climate Tile existing alongside pocket parks that add to the street life while serving as a flood defence. 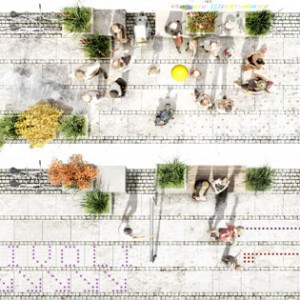 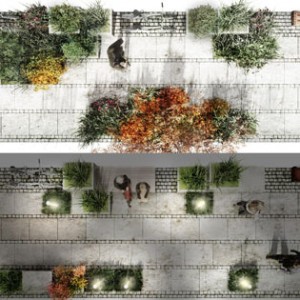 “We wish to show the world that climate proofing isn’t just hidden technology, but also a chance for everybody to participate in the improvement of our everyday spaces where we understand the city’s hidden connections and offer greater life quality,” said Tredje Natur project manager Jeppe Ecklon.

“The Climate Tile is a solution that can ease the problems with rainwater that cannot get away while creating more urban nature in our grey streets.”

Water that passes into the tiles through small holes in their surface can be directed toward a managing unit. The unit can store, delay, divert and percolate the water if it needs treatment. By pairing this water collection with gardening, cities could potentially develop greater urban planting systems that bring food, cleaner air and vitality into otherwise hard to reach places.

Tredje Natur is also considering the lifespan of the Climate Tile, and in the future, he intends to create plugs for the holes in the surface of the product to allow its catchment patterns to be adapted over time. In addition, smart plugs with sensors that measure data about the water supply could also benefit the industry by providing real data about how water levels can best be directed after prolonged rainfall.

The site for this project trial comes as no surprise, as a country Denmark is comprised of a series of islands, and with unpredictable climate behaviour becoming the norm there has been a growing awareness of the need for better flood prevention in Copenhagen.

The Climate Tile is being supported by Denmark’s Market Development Fund and will receive $145,000 (£120,000) in co-financing for further development. It is set for testing at Heimdalsgade in Copenhagen from spring 2017 until 2018.

Tredje Natur expects to bring The Climate Tile to the market in late 2018.