To overcome the negative impacts of increasing urban environments, ACO ProfiLine offers a drainage system that will tackle the challenge of controlling water draining and enable a green roof to flourish.

Green roofs and green walls are growing in popularity throughout the world, and for good reason. This eye-catching synergy of nature and cityscape is redefining how we think about planning and is directly tackling the issues around our urban heat island effect. You might have seen these green blankets seemingly growing out of the tops or sides of buildings, but you might not have thought about why designers choose to implement these designs. Not only does the enhanced aesthetic grab the attention of a passerby, but the urban mosses provide plenty of benefits to the wider community.

Green roofs and walls help keep energy costs down by boosting the lifespan of the roof, providing sound insulation, and maintaining more consistent temperatures all year round. Studies have also have noted psychological health benefits on top of environmental benefits – people are happiest when there’s more biodiversity in their environment.

Some green between gravel and asphalt offers a community space to unwind, de-stress, connect with others, and feel closer to nature. But perhaps the best motive for breaking up our concrete jungles with an injection of lush greenery is what it will do for our climate and surging populations.

The more green roof and green wall initiatives throughout the world, the more we can improve the climate responsiveness of our society, capture hazardous pollutants and minimise health risks in a sustainable way.

The beauty of green roofs is that they can be customised depending on the level of maintenance required, the types of vegetation, the landscape desired, the existing structure of the building, and more.

Intensive roofs are generally over 200mm deep, but their capacity means they can increase the volume of growth and water intake. These roofs require stronger roof structures to support substantial vegetation. An intensive roof will require the same level of maintenance as a garden on the ground.

Extensive roofs are generally lighter and shallower, less than 200mm in depth. They are easily retrofitted to existing buildings, come at a lower price tag and require less upkeep than in intensive roof. Vegetation is generally limited to low, shallow-rooting and groundcover plants, making them low maintenance as the vegetation can tolerate drought, wind and temperature fluctuations. 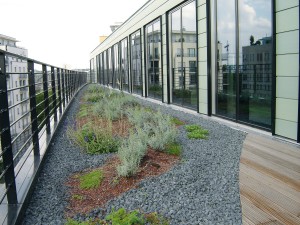 IS THE GRASS GREENER ON THE OTHER SIDE?

Green walls and roofs are starting to take over the world. In Brooklyn, the New York City Economic Development Corporation (NYCEDC) has unveiled their plans to transform two film and fashion warehouses into a green-roofed production hub. In Europe, certain national and city governments mandate the use of green walls and roofs. Closer to home, the idea is latching on in Sydney and Brisbane, wherein 2007 the Brisbane City Council included green roofs in its proposed action plan for dealing with climate change. In 2014, the City of Sydney pushed for more green by introducing a groundbreaking new policy for green roofs and walls implementation – a first for Australia. But, for the most obvious place to implement greener policies, you only have to look at China.

Last month, The Guardian unveiled radical new plans for ‘forest cities’ in China’s most polluted cities to stop one-third of smog driven deaths in the country. Green cities can absorb heat and lower the ambient temperature, reducing the urban heat island effect and filtering out damaging pollutants in the air. Italian architect Stefano Boeri likens his plant-covered vision to the architectural equivalent of a skin graft, hoping to stop metropolises choking on a toxic diet of fumes and dust.

With Chinese officials finally ready to embrace new ideas for tackling the crisis of heavily polluted air in their cities, green architecture covering schools, hotels and even museums will be a welcome addition. In fact, Boeri’s practice posited that in the eastern city of Nanjing the cycle of plant photosynthesis would allow the greenery to absorb around 25 tons of carbon dioxide produced by urban traffic per annum and feed out around 60kg of oxygen every day.

Realistically, we know it will take more than a few skyscrapers to eradicate the nationwide epidemic, green roofs and green walls are a positive step forward in committing to cleaning our air and monitoring our environmental footprint.

To overcome the negative impacts of increasing urban environments, ACO is committed to developing new technologies to deal with stormwater effectively. Waterproofing and drainage play a key role in the effectiveness of a green roof or wall and ACO ProfiLine is designed to help designers confidently specify a drainage system that will tackle the challenge of controlling water draining and enable a green roof to flourish. 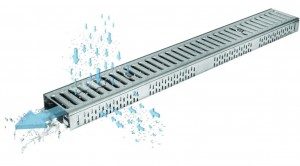 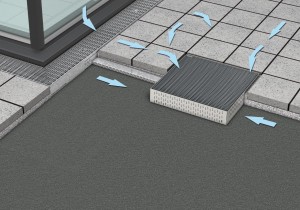 While plenty of designers are getting involved in the construction of green infrastructure, it is critical for them to understand the need for the right drainage product to be installed before green roofs or green walls are planted.

Designers specifying insufficient drainage systems can damage the structural integrity of the building and the longevity of the plants. To protect the waterproof membrane of a building and let the greenery work its magic, the drainage product needs to be selected to capture the stormwater runoff effectively and also capture subsurface drainage.

Fortunately, ACO has pioneered a unique product to tackle the challenge of controlling water drainage on green roofs. ACO ProfiLine is a unique surface and subsurface drainage system that works seamlessly with green roofs or balconies. The ProfiLine system drains water directly from the surface or façade via a linear channel. The side wall of the channel features perforations that allow water to access the channel beneath the surface.

The below ACO Profiline video shows you how this effective system comes to life:

For more information on the ACO ProfiLine range contact ACO on 1300 765 226 or visit www.acobuildline.com.au