A Guide to Flood-resistant Urban Landscapes

Climate change and rising sea levels are impacting the design and shape of our cities. Edward Barsley, author of Retrofitting for Flood Resilience: A Guide to Building & Community Design, outlines six key strategies for creating environments that are adapted to flooding. 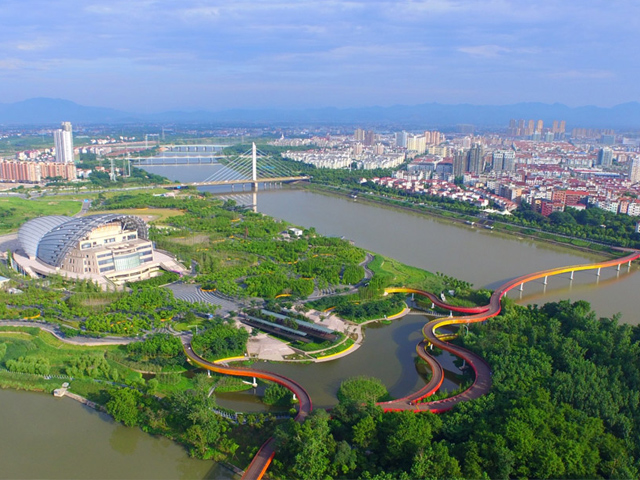 FLOOD RESILIENT DESIGN SHOULD NOT JUST BE SEEN AS A NECESSITY

Barsley believes the adaptations that need to be made to protect areas from rising sea levels could also be an opportunity to improve the world’s cities. “Flood resilient design should not just be seen as a necessity, but as an opportunity through which to deliver wider benefits such as improved biodiversity and to enhance the quality of placemaking in communities throughout the world,” he claimed.

According to Barsley, who heads up design-research practice The Environmental Design Studio, architects should be thinking about how they can positively impact these environments. “The frequency and severity of flood events is increasing as a result of climate change, and it’s an issue that demands urgent and collective action, particularly given that by 2025 it is predicted that three-quarters of the world’s population will reside in coastal zones, many of which will be exposed or vulnerable to the impacts of flooding,” explained Barsley.

“Architects have the ability to influence and affect change at a variety of scales and so it is vitally important they are aware of the many different strategies that can be used to improve the resilience of the natural and built environment.”

THERE IS NO SINGLE ‘SILVER BULLET’ STRATEGY
In the book, which is published by RIBA, Barsley outlines various strategies that could be used to manage flood risk that he grouped into six spatial tactics: attenuate, alleviate, restrict, realign, create and embrace. “There is no single ‘silver bullet’ strategy that will solve the problem of flooding in every location, each type of flooding has different characteristics that influence the suitability of a design strategy,” said Barsley. “When you factor in different construction materials, house types, ground conditions, conservation policies and user preferences you realise that every approach needs to be developed to suit its given context.” 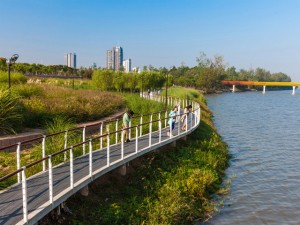 ALLEVIATE | Yanweizhou Park by Turenscape An alleviation strategy will increase the capacity of a water system, or provide supplementary areas that can be flooded, to reduce peak flood levels and limit the extent to which vulnerable locations are exposed to flood risk. An example of this approach can be seen in Yanweizhou Park project by Turenscape where they persuaded the city authority to remove the flood walls, which were stifling the dynamics of the wetland ecosystem, and use a cut-and-fill terracing strategy so that the park could accommodate additional flood water, thereby reducing the flood risk to the city and surrounding areas. 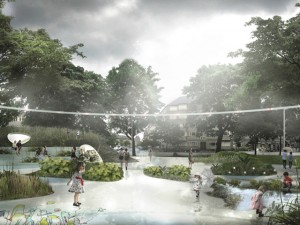 ATTENUATE | Saint Kjeld’s Kvarter by Tredje Natur Attenuation uses natural or artificial structures and spaces to reduce the velocity and/or turbidity of water. This increases the time it takes for a given volume of water to move along the pathway and provides increased opportunity for infiltration.

An example of this approach can be seen in the first “Climate District” being developed in Copenhagen by Tredje Natur. Streetscapes are being retrofitted into “Cloudburst Roads”, which provide green routes for cyclists, pedestrians and vehicles, while also functioning (in the event of heavy rainfall) as channels through which water can be slowed, stored, conveyed and discharged into the harbour. 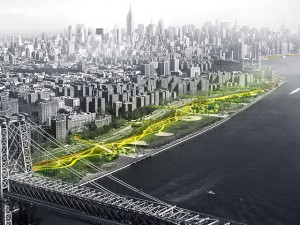 BIG U by BIG

RESTRICT | BIG U by BIG Projects that focus on restriction reduce a community’s exposure to flood risk by preventing water entry through the use of soft and hard flood risk management measures.

An example of this approach can be seen in BIG’s BIG U project in New York, a 16-kilometre-long system that is being developed to help protect Manhattan from flooding. In each neighbourhood, the system is tailored with a particular set of programmes and functions at a variety of scales. 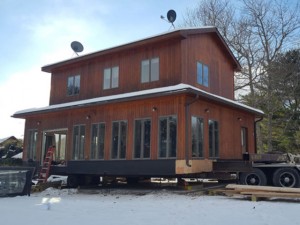 REALIGN | New York Rising Community Reconstruction Realigning means reducing exposure to flood risk by repositioning critical infrastructure, properties or changing the land use classification. An example of elements of this approach can be seen in the “managed retreat” being undertaken in areas such as Oakwood Beach in Staten Island as part of the NY Rising Community Reconstruction Program where hundreds of buildings have been bought out and demolished in an effort to restore the land to its natural floodplain functions.

In other similar contexts, buildings are being dismantled or picked up in their entirety and relocated to lower flood risk areas. When it comes to vertical realignment, we identified a number of examples where homeowners have reduced the exposure of their properties to flood risk by adding an extra storey, and reconfiguring their living areas so that the ground floor zone becomes a non-habitable space. 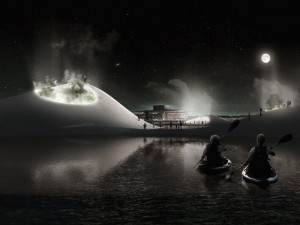 CREATE | CPH Harbor Blue Plan by Tredje Natur This involves constructing or generating new landforms and structures in or near water bodies onto which development and, or alternative land uses can be assigned.

An example of this can be seen in Krønlob Island development by COBE, Vilhelm Lauritzen Architects, Sted, Ramboll and Per Aarsleff and the CPH Harbor Blue Plan by Tredje Natur that both propose the creation of new landforms. 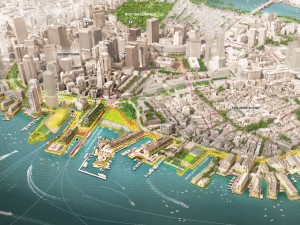 EMBRACE | Resilient Boston Harbor by SCAPE Projects that embrace flooding accept that water will be a feature within the scheme and use it as a design driver to organise and adapt the built / natural environment in a contextually appropriate manner.

An example of this can be seen in the USA, where SCAPE has been working alongside the City of Boston to create a vision for a “Resilient Boston Harbor”. Interventions include elevated landscapes, protective parks and the resilient retrofit of vulnerable buildings.

Previous postThe Architecture of Health: Modern Lessons from the Medical Buildings of the Past Next postUrban Designer Calls for Greener Neighbourhoods