Local youth will enjoy a new skate park and playground facilities when an old industrial site is transformed into new parklands at the junction of Glebe and Annandale. 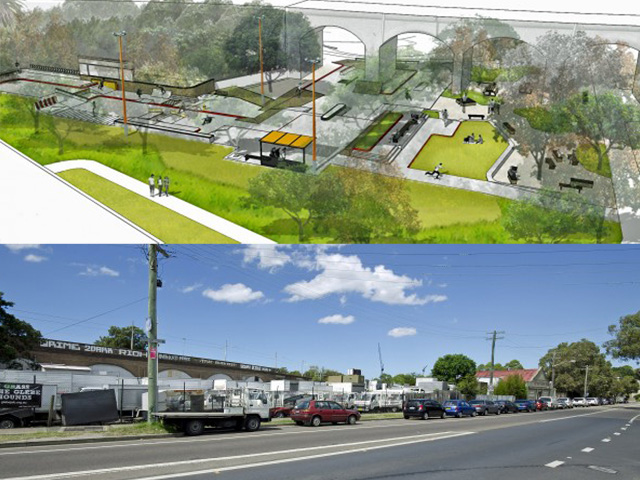 Skateboarders and youth of all ages and abilities will enjoy a new skate park and playground facilities when an old industrial site is transformed into new parklands at the junction of Glebe and Annandale.

As part of new open space linking The Crescent Lands with Glebe Foreshore, the City of Sydney will build a skate street plaza requested by skaters during a recent workshop, and re-open the archways beneath the light rail viaduct.

A quarter pipe, concrete ledges and other ramps near where the viaduct crosses The Crescent will offer skaters of all levels a chance to sharpen their skills as they enjoy their growing sport.

The facility will be linked via the newly opened viaduct archways to the Federal Park playground, which will be refurbished and expanded with a focus on providing inclusive play. Elements suited to beginners in the skate park will be located closest to the playground.

“We’re thrilled to provide this facility for skaters as part of the new parklands,” Lord Mayor Clover Moore said.

“The project will create about one-and-a-half football fields’ worth of new open space on the old Crescent Lands industrial site, as well as restoring long lost views through the heritage viaduct archways to Federal park.

“As well as giving residents and visitors more space for leisure and recreation and much-needed community facilities, the work will connect old parklands on the foreshore to new ones along The Crescent.”

An old industrial site on The Crescent in Annandale will be transformed into a park with a skate plaza and new links to the Glebe foreshore through opened viaduct archways.

Expanded picnic and BBQ facilities are part of the project that will see old council owned buildings removed and better links from Annandale to Federal and Bicentennial parks.

The new open space will offer large grass areas for casual recreation and junior sport and have an exercise area for cardio and strength training to the south of the skate facility.

New pathways will provide a connection for pedestrians and cyclists from Federal Park to the new open space.

The works are part of the City’s Johnstons Creek Masterplan to add 5.4 hectares – the equivalent of 10 football fields – of new parklands to the 14 hectares of existing open space.

Work on another public park at Harold Park just to the south of the Crescent Lands, connecting Forest Lodge and the Glebe foreshore, will begin in November.