Resting firmly on the cutting edge of photovoltaic technology, the OPV (organic photovoltaic) array on display at the German pavilion for Expo Milano 2015 embodies the pinnacle of german ingenuity and cross-sectoral collaboration.

The ‘idea trees’, conceived by Schmidhuber architects, symbolise how the seed of an idea can grow into a reality. During the day one can see the future generation of solar technology in the ‘trees’, while at night the covering is illuminated by the energy stored during the day: the duality of the surface serves to reveal both the technology and its power.

Developed by Belectric OPV, the works preview a future of ubiquitous, cost effective and reliable solar power. The transparent external panels allow sunlight through during the day, revealing the hexagonal solar units. While the solar units displayed atop the ‘idea trees’ are hexagonal, the potential shapes are truly only limited by the imagination. OPV’s versatile lightness opens a wide range of applications.

For those unfamiliar with the chemical process behind photovoltaic technology; when sunlight strikes the front contact of the cell it creates free electrons which pass through a semi-conductive polymer and are absorbed by holes in an electron deficient substrata. When absorbed they release energy upon bonding, leaving their excited state and creating an electrical current.

The semi-conductive polymer retains significant opportunities for improvement as the technology matures, but experts foresee a day when the cells themselves are embedded in consumer products like the backs of cellphones. 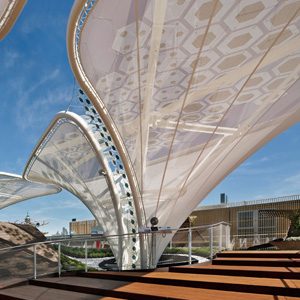 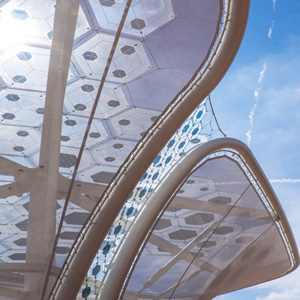 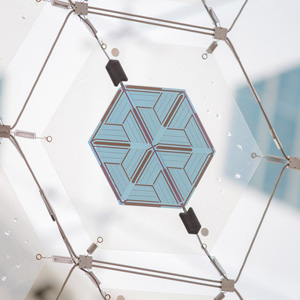