When it comes to personal DIY projects most people might be happy with building a deck or a shed – not Jono Williams, a Plastics Engineer and Graphic Designer from New Zealand. After shooting the breeze with a mate one night, this Kiwi inventor committed to building the ultimate app-controlled treehouse.  After working on the design for several months, he ditched the treehouse idea for something better – the Skysphere – a 25sqm app-controlled man cave towering 10m off the ground in the remote countryside of New Zealand.

The Skysphere represents the ultimate man cave, complete with custom-built furniture, multicolour LED lights, and a built-in beer dispenser- all operated using voice control commands. Fully powered by solar energy, the Skysphere offers a 360 degree view of the incredible country landscape surrounding it, which was achieved with the implementation of a carefully-engineered seamless polycarbonate window.

An Android-controlled computer system monitors and controls temperature regulation within the structure, opening and closing motorised doors to vent the room when needed. It’s also fully decked out with high speed internet, a Miracast projector, a wireless sound system and a rooftop stargazing platform. Visitors can even record their fingerprints in the system, which will allow the computer to greet them by name when they visit again.

For anyone looking to replicate his work, this sort of macho awesomeness doesn’t come cheap, or easy. At a cost of $50,000, 3 years and 3000 man-hours in labour, Williams designed and built the project himself from the ground up.

Williams conceived the design and ordered all the materials long before he even knew how to weld, attending classes and teaching himself the various skills needed to make the tower viable and structurally sound. He imported 4 tonnes of steel from China, welding the pieces together himself onsite, as well as designing and importing his own solar power strips and LED lights.

The Skysphere was very carefully designed with safety in mind. With help from friends and others, Williams learned everything he needed to know about foundation design, structural engineering, earthquake simulation, and wind simulation in order to complete his project.

Williams described his vision for the project as “the ultimate man cave to me is to have beers served to your hand while you’re sitting on the couch. The arm rest has a coaster that goes down then comes back up with a beer on it, a good entertainment system, Playstation, all being 10m up in the air with a cool view.” It’s difficult not to be impressed with the sort of dedication that went into making that vision a reality. 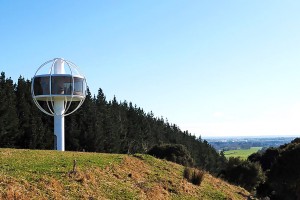 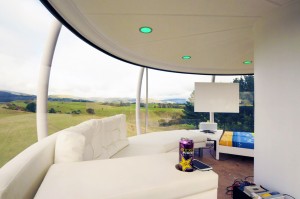 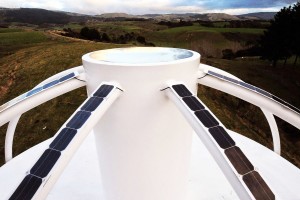