New York is set to house the world’s biggest modular building and break new ground with an innovative method of modular assembly which promises to significantly reduce construction time. 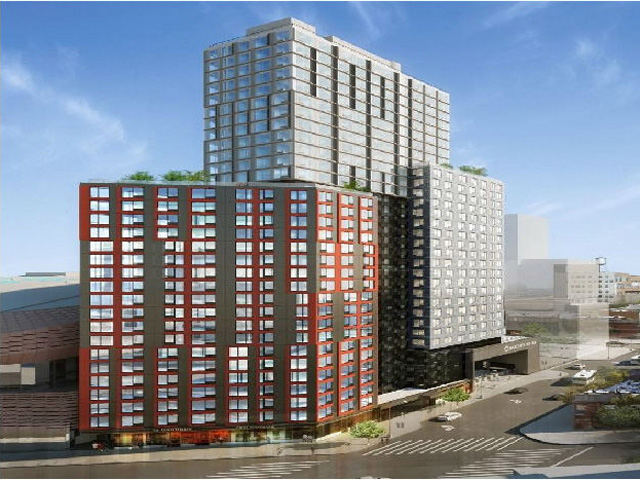 The New York borough of Brooklyn is set to become home to the world’s biggest modular building following the development of techniques which facilitate the construction of large-scale structures from prefabricated modules. 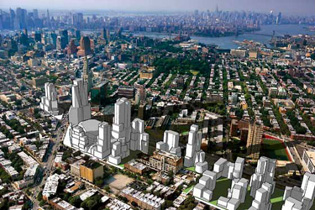 The “B2″ residential skyscraper in Brooklyn will consist of 32 storeys of prefabricated apartments, seizing the title of the world’s tallest modular building from a 24-storey student dormitory built in 2009 in the English town of Wolverhampton.

Each of the 40-to-88 square metre apartments will be built on the ground in Brooklyn’s Navy Yard industrial park before being conveyed to a building site in the borough’s Atlantic Yards via truck, and fitted together like the pieces of a gargantuan Lego set by means of cranes.

Prefabricated buildings themselves are nothing new, having first been widely adopted by American architects in the post-war era as a more economic and efficient means to produce key facilities such as hospitals, government offices and schools.

Where B2′s developers are striking new ground, however, is in the adoption of an innovative method of modular assembly which promises to significantly reduce construction time.

FCS Modular and Swedish company Skanska have opted for the use of a system of “group technology workcells,” which involves cross-disciplinary teams of union tradesmen working on different parts of the same floor simultaneously.

According to Forest City Ratner (FCR), the real estate developer behind B2, this and other innovations have enabled the company to “(crack) the code” of modular construction, slashing the time required to build the skyscraper by a third compared to conventional techniques.

FCR expects work on B2 to wind up within a mere 18 months, and says the prefabrication process it has employed will generate a staggering 70 to 90 per cent less construction waste than prevailing methods. This will achieve major monetary savings for the developer, as well as a huge reduction in the project’s environmental impact.

In addition to innovation in the construction of the pre-fabricated modules themselves, FCR has also made pivotal changes to the process for assembling the mods once they arrive on site. A key innovation is the use of a rubber sealant, which is applied to the facades of individual modules prior to delivery to connect each of the pieces together, obviating the need for metal welding work in the apartments.

Their construction method also combines modular and traditional buildings techniques, with steel braces and a conventional foundation used to safeguard the finished structure against strong winds or seismic activity.

The standards for the building’s construction are incredibly stringent, allowing for only several millimetres of deviation from precise measurements for the desired structure. FCR representatives have said the building itself will be “ridiculously tight” and have the level of precision applied to the construction process to that traditionally required for aircraft engines.

B2 is part of an extensive redevelopment of Brooklyn’s Atlantic Yards by FCR, encompassing the provision of office buildings, retail space and housing, as well as the construction of the Barclays Centre arena to house the Brooklyn Nets NBA basketball team. Upon completion, B2 will house some 363 rental units, around half of which will be dedicated to affordable housing for low to medium income tenants.