New York has been re-imagined as a self-sustaining city in a six-year research project that aims to tackle fears of global warming. 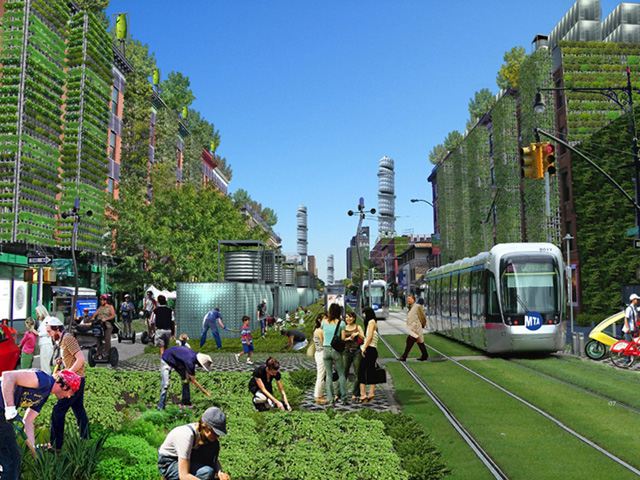 Research group Terreform have envisioned what New York would look like if it underwent a transformation to become a self-sustaining green paradise. 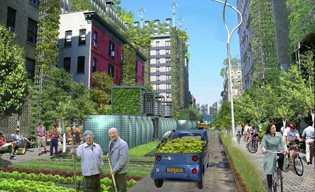 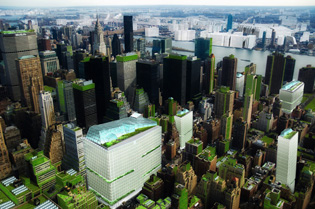 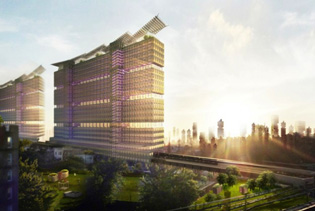 The project is called ‘New York City (Steady) State’ and the production of food as well as water, waste disposal, air quality, climate regulation, construction, manufacturing and construction would all occur within New York's geographical boundaries, making the city self-sufficient.

The six year research project proposes a scale of change required to successfully unhook the city from outside resources.

The plan would see 147th Street transmogrify into an urban farming block, with each reclaimed rooftop providing enough food for 12,000 individuals. There are plans for meat production towers where chickens would range freely on outdoor terraces. The concept of 'greenfill' would see half the vehicular street space immediately transferred to pedestrians and the public realm.

Mitchell Joachim and Maria Aiolova founded the Brooklyn, N.Y–based non-profit group Terreform on the premise of bringing together science and the built environment, ecology and urbanism.

"We have a new model: the socioecological condition. Its part cultural, part science, half and half," says Joachim. "It is a great way to think about solving the problems that man has created."

To provoke discussion about the environment, Terreform produces concepts like the Fab Tree Hab, a literally living house, grown on site and shaped by reusable, CNC-milled scaffolding. Joachim stresses that collaboration between architects, engineers, scientists, and urban planners is essential. "When you think of massive issues like the city, [nothing comes] from any one field - especially urban design."

While the goal of "New York City (Steady) State" was to look at transforming Manhattan, Brooklyn, Queens, The Bronx and Staten Island as a whole, Terraform hope that the encyclopedia of ideas the project represents will have future value to cities looking at ways to have more efficient and ecological footprints.