THE ANSWERS TO GREEN ROOFS 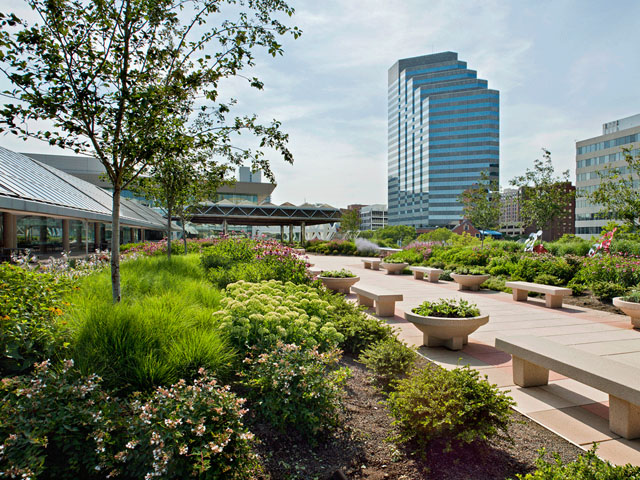 Architects, property developers and property owners often ask me a variety of questions, including how the planning scheme affects the design of green roofs, what local government planners value in green roofs, which councils welcome green roofs, how the Civil and Administrative Tribunal views green roofs and what it values in them.

The answers to these questions matter when it comes to managing and maintaining green roofs, too; they’re not just relevant during the design phase. Do the planning scheme and planning permission process affect the maintenance of green roofs? Do they foster good management of green roof assets? How do they ensure good design leads to good and lasting green roofs which are assets both to their owners and to the surrounding community and environment?

In Victoria, at present, the planning scheme and local planning policy frameworks tend to affect green roof design only (if at all) insofar as requirements for OH&S, landscape character and feasibility, privacy, streetscape aesthetic and communal space are concerned. These principles are considered relatively superficially by local governments and the Victorian Civil and Administrative Tribunal (VCAT). But this situation is likely to change.

In 2015, the City of Melbourne approved a green roof on condition of submission of a full Management Plan which “must include details of maintenance and management measures to maximise the viability of the Green Roof.” In 2014, VCAT ruled that both the development and management of the green roof for a house in the City of Banyule were critical for the extension of the building into the backyard; VCAT required that the green roof be implemented prior to occupancy.

In several VCAT rulings, approval of the green roof is conditional upon plans showing details of plant species and soil volume (for example, City of Stonnington, 2010).

As a general rule, VCAT is supportive of green roofs on grounds of the sustainability of the development and the neighbourhood character. In approving a project supported by council in the City of Boroondara in 2014, for example, VCAT noted that it was impressed by the incorporation of a green roof into ‘the overall dwelling concept.’

In a VCAT hearing in 2013, the City of Melbourne argued successfully that a green roof should be supported on grounds of sustainability and because it would complement the character of the neighbourhood. An earlier 2011 VCAT hearing approved a green roof in the City of Kingston because the roof’s proposed landscape reflected the neighbourhood character.

At the same time, increased knowledge of green roofs coupled with the emergence of rating systems such as WELL will make both local government planners and VCAT eager to accept green roofs on account of becoming more aware of the sophisticated impact of green roofs on health, heat, water management and ecology.

If we want great green roofs, what should council planners and VCAT consider when reviewing an application for development that includes a green roof?

A key point to keep in the mind is that while private green roofs are created for specific purposes, they simultaneously affect the environment around them – the domain of the local government. For the most part, they affect the broader environment for the better, cooling it down, managing the volume of the storm water that leaves the site, providing habitat and so on. There may well be good reason therefore to allow a green roof where height or other restrictions prohibit other development. Indeed, planning lawyers advise that alterations in planning regulations in the CBD may result in developers using green roofs as a key part of planning applications.

But green roofs can also affect the surrounding environment to its detriment. Whereas the majority of water in a landscape in the ground soaks through the soil, being filtered in the process, on a green roof, the water which soaks through to the drainage pours into the drains. A high load of nutrients in a green roof’s run off damages local waterways. And although the roof is isolated from the ground level landscape, both birds and the wind will disseminate seeds from the roof. If these seeds come from local or national weeds, the roof will damage the landscape around it.

It is therefore proper for local government, and the planning process, to give consideration to green roofs. A second key point to keep in mind is that few, if any, green roofs fulfil their purpose on the date of their installation. Instead, the garden and its ecology need to develop. Green roofs are, or should be, appreciating, not depreciating assets.

Yet green roofs can only increase in value if they are well-maintained. Maintenance, for its part, takes place in the context of management. Without good management, you cannot expect good maintenance. Amongst other factors, the budget for maintenance is determined in a green roof’s management plan.

This matters when it comes to planning because decisions made in the design phase ostensibly to reduce costs often do not, in fact, remove a cost, but simply shift the cost from the capital budget to the maintenance budget. This is a perfectly reasonable allocation of resources, so long as the budget for maintenance suffices to cover the enlarged scope of work.

For this reason, Do it on the Roof recommends that a plan for the management of a green roof be formed during the design phase. Ideally, the management plan is developed in conjunction with design, and it both influences and is influenced by the design.

If local government planning departments and VCAT want to ensure green roofs function as hoped and intended, we recommend they require a green roof management plan as a key element of the planning application.

So, should local governments issue guidelines for green roofs?

International examples show that specific green roof policies and guidelines can inadvertently generate poorly performing green roofs that deliver comparatively low value both to their owner and their surrounding environment. For example, in some parts of North America, green roofs have been mandated to assist in water management. The resulting green roofs have tended to be monocultures with a low resilience to disease and pests; they realise little of their potential value outside the sphere of managing water. We therefore recommend that local governments in Australia keep proscriptions for green roofs as minimal as possible.

Instead, the proper focus for planning is the management plan. Is there a plan for management of this green roof that will help it fulfil the purpose for which it has been invested in? Does the management plan include a budget for maintenance? Has the owner or body corporate agreed to the budget? If so, there are strong grounds to expect that the owner will continue to invest in the cultivation and maintenance of the green roof.

Do it on the Roof welcomes information from local governments about their approach to green roofs. We run workshops on request for planners on what to consider when assessing green roofs.

Words by Shelley Meagher via Sourceable