Several cycleway links across Sydney are expected to be complete this year as the city looks to ease congestion on the roads and support the growing number of people riding. 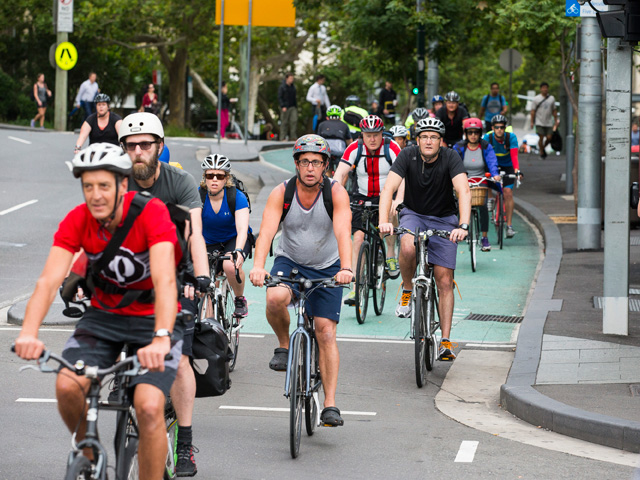 Ten major bike connections are under construction or in design to support the growing number of people riding and ease pressure on the city’s roads and public transport network. 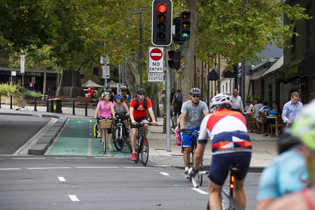 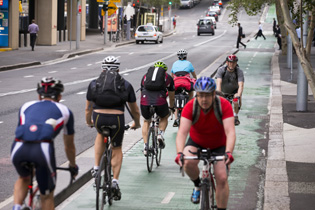 City of Sydney-funded cycleway links along sections of Castlereagh and Liverpool streets are expected to be complete this year, construction is underway on another four projects, and design work is being undertaken on five more.

The City has reprioritised future cycling projects to align with routes in the Transport for NSW Sydney’s Cycling Future report and the NSW Government’s target of doubling the number of bike trips in Sydney by 2016, based on 2011 figures.

Lord Mayor Clover Moore said the City was doing all it can to ensure the infrastructure is there to support the growing number of people who want to ride, ease congestion on our roads and public transport, and help boost the local economy.

“Bike trips have more than doubled over the last four years in our local area, and where there are cycleways, they’ve doubled again,” the Lord Mayor said.

“On Bourke Street alone there are now five times as many riders. Transport for NSW surveys confirm many more people would commute by bike if it was safer and more convenient.

“In Green Square alone, some 53,000 residents and up to 22,000 new workers are expected to move in over the next 15 years. Cycleways through the Green Square town centre will connect to those we’ve already there and offer a convenient and comfortable 15-minute ride to Central Station.

“Bike routes are also critical to help people move in and around areas like Barangaroo, which is expected to have 23,000 workers and residents and up to 33,000 daily visitors, not to mention the cycling demands required for the new Ashmore estate in Erskineville and new residential developments in Harold Park.”

Bike paths under construction include the Broadway link through Chippendale, an upgraded shared path connecting the Bourke Street and Bourke Road cycleways and safer cycling links to the Sydney Harbour Bridge, making the north-south commute a smoother ride.

Design work is underway on connections to the Castlereagh Street cycleway, a new cycleway along Lawson Street in Redfern, and cycleways for Green Square Town Centre. The City has also received NSW Government funding to help design a major cycleway link along Moore Park Road.

A new children’s bike track at Sydney Park is also supporting the growing number of children learning to ride.

“Managing the growth of Sydney requires strong transport connections and the introduction of separated cycleways is one element in the creation of diverse transport options that Sydney will need to contain congestion on our roads and on public transport at peak times,” said Executive Director of the Sydney Business Chamber, Patricia Forsythe.

“Infrastructure like cycleways helps generate business and contributes significantly to the local economy. Creating high-quality cycling and walking environments around shops and businesses is vital for Sydney’s economic future.”