The “world’s 1st crowdfunded public infrastructure” has been completed in Rotterdam - in the form of a 400m long bright yellow pedestrian bridge. 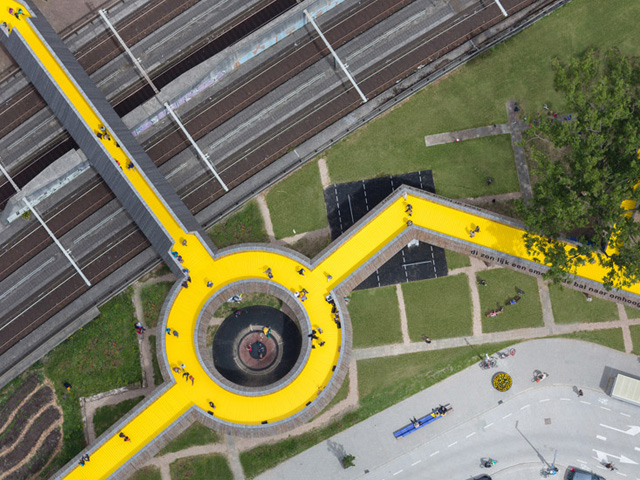 Rotterdam studio ZUS has completed what they describe as the "world’s first crowdfunded public infrastructure project" - a 400-metre-long pedestrian bridge in their home city. 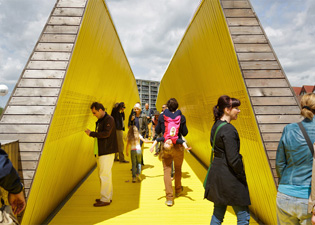 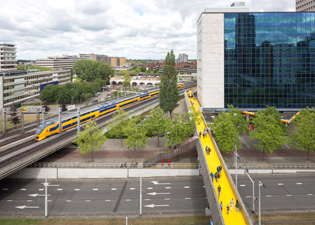 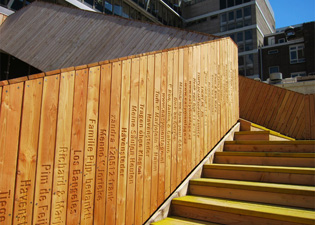 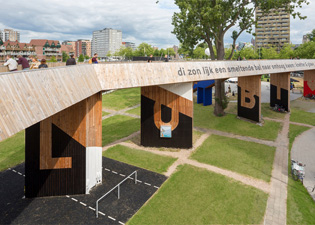 Named Luchtsingel, which means ‘air canal’, the structure runs through a building and across roads and railways to connect three previously disconnected areas of the city.

The bright yellow wooden structure is raised above ground by an entire storey, creating an uninterrupted pedestrian pathway that connects the recently renovated Rotterdam Centraal station with the historic Laurenskwartier district. It also links up a series of individual public realm projects, including a rooftop vegetable garden and a new park.

Initial fundraising came from a crowdfunding campaign. For every €25 ($37) donated, supporters could have their name inscribed onto one of the wooden boards that line the edges of the bridge. Over 8,000 people signed up to support the campaign financially. The architects were later granted funding to complete the project by the city council.

The project was first initiated by the architects back in 2011 when a proposed office development fell through, leaving several existing buildings unoccupied. The architects saw this as an opportunity to come up with their own strategy for the area.

"The Luchtsingel, together with the transformed buildings and new public spaces, forms a new three-dimensional cityscape," explained Kristian Koreman, co-founder of ZUS.

Their first step was to take over an existing slab block on Schiekade, just east of the railway station. They moved their studio onto one floor, while the rest of the building became an incubator for young entrepreneurs.

The building, known as Schieblock, now houses a design shop and bar on the ground floor, while the roof provides a garden for urban farming – specialising in herbs and vegetables. "It has become a prototype for sustainable development," said Koreman.

The next step was to develop a strategy for the wider area, centred around a new pedestrian-friendly route that cuts right through the centre of the Schieblock – inspired by projects like the High Line in New York.

By bridging across both the road and tram lines of the Schiekade, as well as the nearby railway, it reconnects three areas that had previously been impossible for people to move between on foot. At its centre, various pathways converge at a circular viewing platform with built-in seating.

Yellow paint was used to give the project a clear visual identity. Beyond the bridge, paint has also been applied to pathways to extend the route further.

Other public spaces created as part of the project include an events space on the roof of nearby Hofplein Station and the new Park Pompenburg, which features sports facilities and an area for picnicking.