An ancient Syrian landmark, the Paylmyra Arch, is to be reproduced using 3D-printing technology and placed in London and New York as part of UNESCO World Heritage Week. 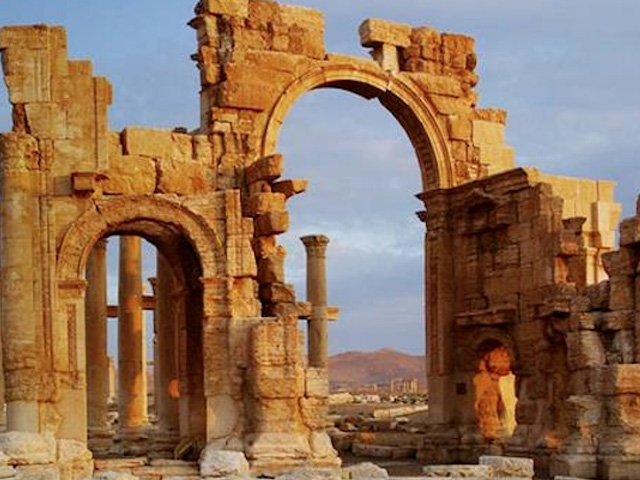 Full-scale copies of a 2000-year-old Syrian architectural landmark believed to have been destroyed by ISIS will be on view in London and New York in April 2016. 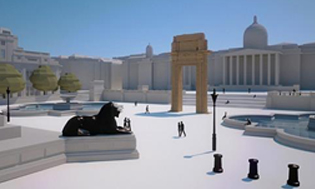 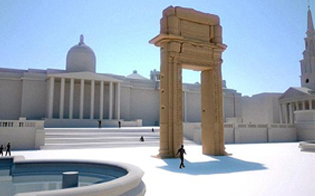 The Institute for Digital Archaeology – based in Oxford, England, and Cambridge, Massachusetts – announced this week that it will recreate the 15-metre-high Palmyra Arch using a large 3D printer.The renditions of the landmark will be installed in London's Trafalgar Square and New York's Times Square during UNESCO World Heritage Week in April 2016.

Located north-east of Damascus, the Palmyra Arch was an entryway to the Temple of Bel, an ancient Syrian ruin that was destroyed in August 2015 by militants for the radical organisation known as the Islamic State, ISIS or Daesh. The temple was situated within Palmyra, an important city in the ancient world. It sat on a trade route linking Persia, India and China.

"Palmyra was one of the most important cultural centres of the ancient world," said UNESCO. "From the first to the second century, the art and architecture of Palmyra, standing at the crossroads of several civilisations, married Graeco-Roman techniques with local traditions."

It's unknown if the Palmyra Arch was fully destroyed. "The status is uncertain," said Alexy Karenowska, the institute's director of technology. "This is part of the motivation for selecting this particular object for the installation."

"Given the level of destruction in Palmyra, it seems unlikely it has survived without some damage, but if it remains standing in any form, it represents an outstanding symbol of resilience," she added. "If it doesn't, then the message is obviously just as powerful, but for different reasons."

The installation will be created off-site and then assembled at Trafalgar Square and Times Square. In London, it will stand next to the National Gallery and Nelson's Column, both Neo-Classical in style.

Founded in 2012, the Institute for Digital Archaeology is a joint-venture between Harvard University, the University of Oxford and Dubai's Museum of the Future. It promotes the use of digital imaging and 3D printing in archaeology and conservation, and its digital archives are intended to encourage interdisciplinary collaboration and the crowd-sourcing of research.

Earlier this year, in collaboration with UNESCO, the institute distributed 5000 low-cost, 3D cameras to volunteer photographers in conflict zones in the Middle East and North Africa. The photographers were asked to take photos of threatened cultural objects and structures.

The images will be uploaded to a database and will be used for research, educational programs and 3D replication. The organisation hopes to collect 20 million images of at-risk structures by 2017.

"Digital archaeology represents the natural evolution of classical archaeology, permitting researchers to look at ancient objects in a whole new way, to uncover hidden inscriptions, invisible paint lines, the faintest palimpsests – and to share these discoveries with the world," said the institute.

"Beyond that, as the Million Image Database demonstrates, it can put these crucially important repositories of our cultural identity and shared history forever beyond the reach of those who would destroy them."