MICROBOTS TO THE RESCUE


Could microbots be the future of water treatment? A team in Germany has designed a microbot that could be the answer to removing heavy metals from our waterways. 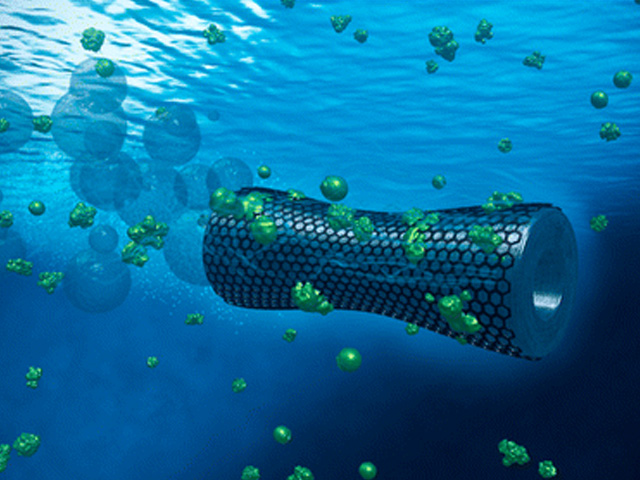 It seems like a scene from a futuristic film—a swarm of tiny microbots sweeps in and saves the Earth. But this space-age scenario has recently become reality.

Microbots, by definition, are miniaturised machines created to perform a specific task with tremendous precision. An international research team led by the Max-Planck Institute for Intelligent Systems in Germany has designed a microbot capable of removing contaminants such as lead and other heavy metals from water. Their research is published in Nano Letters.

The tube-shaped microbots are so tiny (15–20 microns long) that a billion will reportedly fit in a syringe. Their finely engineered architecture is composed of three functional layers. An exterior layer, made of graphene oxide collects contaminants. A middle layer made of nickel is ferromagnetic, which allows the microbots to be controlled (and retrieved) using a magnetic field. The microbots’ internal layer is platinum, which enables their self-propulsion. Platinum breaks down hydrogen peroxide added to the contaminated water. This produces microbubbles that escape from the back of the microbot and propel it forward.

A fleet of 200,000 bots injected into tainted water recently stripped 80–95% of the lead contaminants in an hour. The study’s authors acknowledge that this represents a remarkable success. It suggests that the technology may support the decontamination of lead-tainted water and prevent devastating damage.

It also indicates that microbots may be a potential solution for heavy metal removal from industrial waters and waste streams. In the future, microbots like these could be guided through materials by a magnetic device to accomplish a variety of tasks. Thus, the team hopes to expand the microbots’ range to capture other pollutants produced by an assortment of industrial applications.

Once contamination collection is complete, a magnet retrieves the bots from the water and they can be treated with an acidic solution to remove the metal ions that they’ve gathered. Therefore, microbots can be reused and the heavy metals they collected can be recycled.

“This work is a step toward the development of smart remediation systems where we can target and remove traces of pollutant without producing an additional contamination,” said Samuel Sánchez, one of the study’s co-authors.

Microbots To the Rescue
Universal Magazines