INNOVATION AS A CATALYST FOR GROWTH


The biggest construction project in Europe, the London Olympic Park, has been hailed an unmitigated success. At the helm was an Australian engineer. 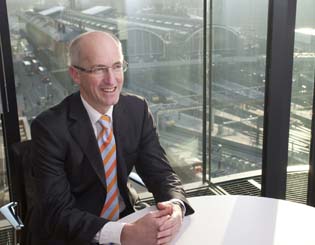 The biggest construction project in Europe – the Olympic Park in London has been hailed an unmitigated success.

At the helm was Australian engineer, Sir David Higgins, knighted for his contribution to the transformational project based in East London.

The London 2012 Olympic and Paralympics Games were credited as the ‘Regeneration Games’, delivering transformational change and leaving a lasting legacy of sports venues, new homes, new transport links, new energy networks and a new urban park for a previous ignored area of London.

In this lecture Sir David will argue that infrastructure is much more than just a discounted cash flow. It is a national asset.

Using examples like the Oresund Bridge, the longest combined road and rail bridge in Europe connecting the Danish capital of Copenhagen and the Swedish city of Malmo, he will show that while the bridge itself has not achieved the anticipated traffic and could be considered poor value for money, it has transformed this part of Scandinavia. The same hard economic modelling, if applied to the Channel Tunnel would show a similar comparison. The High Speed rail link between London and Paris – which has replaced half of all air traffic – has also transformed travel between the two cities.

Sir David brings a unique experience and perspective from working on the London Olympics infrastructure.

Sir David gained his degree in Civil Engineering at the University of Sydney and a diploma at the Securities Institute of Australia. After graduation, he worked in the United Kingdom and Africa, before returning to Australia in 1983, and joining the international property and construction company Lend Lease Corporation in 1985. In 1995, he was appointed managing director and chief executive, when the corporation’s developments included the 2000 Summer Olympics in Sydney. In March 2003, Higgins was Chief Executive of English Partnerships, a UK government national regeneration agency. Higgins was appointed Chief Executive Designate of the Olympic Development Authority from December 2005, and appointed Chief Executive from March 2006. In September 2010, he took up the role of Chief Executive of Network Rail.

Bookings: This is a free, public lecture. Please register your attendance at: www.sydney.edu.au/sydney_ideas

Innovation as a catalyst for growth
Universal Magazines