A proposed upgrade to Parramatta City will span 1.5km down the Parramatta River corridor and feature Australia’s first ever Water Square. 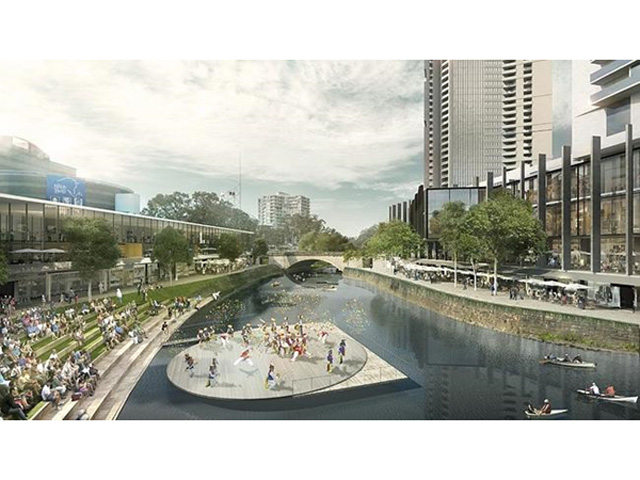 A revitalised river foreshore precinct for Parramatta City has been envisioned and will include Australia’s first Water Square, in addition to a public beach, enhanced public transport infrastructure, new pedestrian and laneway links, and a variety of new buildings. 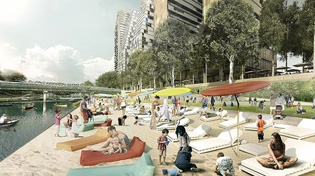 The proposed development by landscape architecture firm McGregor Coxall will span 1.5km down the Parramatta River corridor between O’Connell and Harris Streets in the Parramatta CBD, and comprise four distinct precincts that are defined by the five trafficable bridges running north-south across the river.

Kings QuarterThe westernmost precinct, defined by the Rings and Marsden Street bridges.Proposed upgrades to the King’s School and Justice Precinct’s foreshores to include multi-functional terraces, a primary wetland and linking footpaths to the local stadium—Parramatta Park.

Cultural QuarterProposals include a Riverside Theatre that will affront the northern banks of the river and a Riverside Tower that will rise from the southern bank. The tower will include commercial, retail, a discovery centre and residential units. Prince Alfred Park will also receive an upgrade and incorporate new pedestrian links and event spaces.

City Quarter WestEast along the river and growing in scale, upgrades include a Riverside Terrace on the northern bank and a River Square on the southern. If approved, the River Square will be Australia’s first Water Square – a multi-functional space that can accommodate up to 10,000 people, a floating stage, various event functions, children’s play and riverside swimming. Similarly, the opposing Terrace, an upper level and lower level plaza, will be designed for entertainment and will accommodate markets and other temporary initiatives.

Also in the City Quarter West is a proposed City Beach that will be built on the southern foreshore between Barry Wilde Bridge and the Elizabeth Street Footbridge. It is designed to provide a passive recreational space and an alternative riverside destination to the River Square and Parramatta Quay.

City Quarter EastThis quarter will house the Charles Street Weir, the Escarpment Boardwalk and Parramatta Quay which would create a major ferry interchange and connect Parramatta with Sydney.

In total, the proposals incorporate six pedestrian crossings, a number of heritage items, public domain foreshore areas to the north and south of the River, two weirs, a Rivercat Ferry Wharf, a variety of built conditions and adjacent parkland abutments.

The proposal document also includes a ‘Built Form and Structures Plan’ which suggests a number of principles to improve river address and guide future built form within the strategy area.