The Australian team behind the Fleming's and Trailfinders Garden at this year's Chelsea Flower Show were rewarded for their efforts with a prestigious Gold Award. 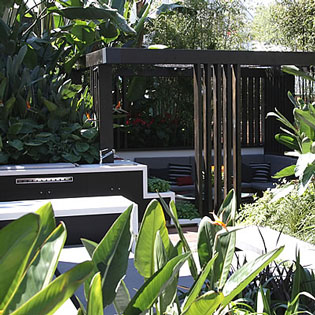 Making the best of your life outdoors was taken to another level at the 2010 Chelsea Flower Show. The lavish Fleming’s and Trailfinders Australian Garden was designed by Australian Landscape Designer Scott Wynd, and constructed by Melbourne landscape specialists Ian Barker & Associates. The plants were prepared by industry renowned Fleming’s Nurseries. 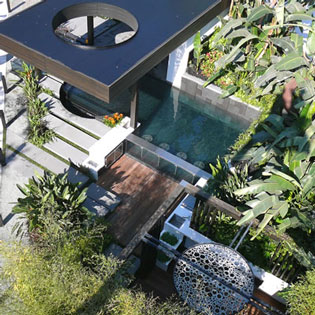 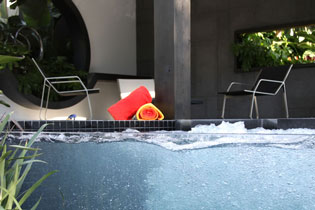 The all Australian team designed and constructed the garden over three weeks and have been rewarded with the prestigious Gold at the Chelsea Flower & Garden Show in London - an event that is regarded as the pinnacle for the garden industry. Becoming a signature for Australian garden entries is functionality – they are not only a show piece, they are a space to be lived in year round. Featuring a pool with a wet bar, which forms part of a barbeque area, the garden also includes a spa, outdoor kitchen and sunken lounge, all providing further home luxuries in the seclusion of a lush garden.

The constructed elements of the garden required a high degree of craftsmanship and revolved around the central pool and spa. To one side is a multi-functional room that can be opened or closed according to the weather, allowing the space to be enjoyed year round. Also linked to the pool is a wet bar that forms part of a barbeque area offering space for entertaining. This area then merges into a sunken lounge covered by a contemporary pergola.
The Australian garden has attracted much interest in the British press, in particular the ‘lap pool’. It was also high on The Queen’s list of ‘must see’ exhibits.

Scott Tymkin of Ian Barker & Associates is delighted with the result after three exhausting weeks of leading the construction team. “We set ourselves a challenge with the amount of detail in the features. A design that would normally take 10 to 12 weeks to build we have managed to pull together in around 16 days which is credit to the team.” says Scott. Ian Barker & Associates is no stranger to Chelsea, having competed and taken home Gold in 2008. In 2009 the Australian team was forced to postpone their entry due to Black Saturday, so the victory is even sweeter on this occasion.

The 2010 RHS Chelsea Flower Show sold out 11 days prior to opening – the earliest ever. With over 11 acres of gardens and 600 entries the show is by far the largest in the world. Adding to the event’s horticulture extravagance this year was a garden of diamonds valued at over twenty million pounds.
www.rhs.org.uk/Shows-Events/RHS-Chelsea-Flower-Show/2010

Images: The Australian Gold winning garden – typical of many Australian backyards, it has been designed as an entertaining garden. It aims to unite the love that Australians have for outdoor living with modern architecture and green space.