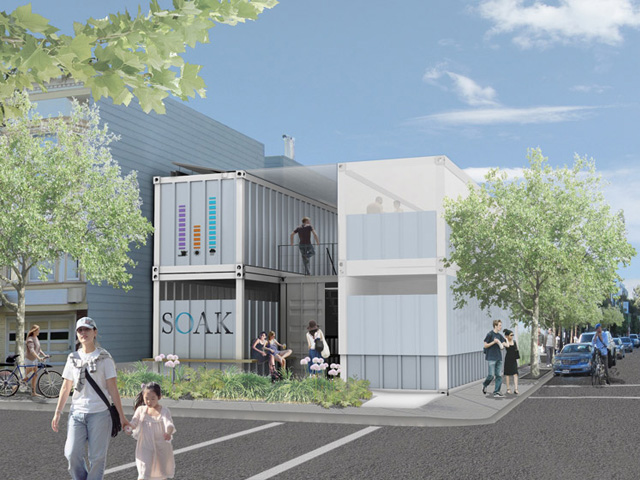 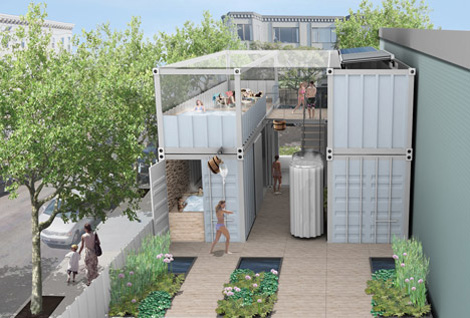 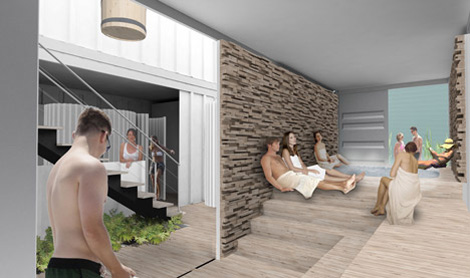 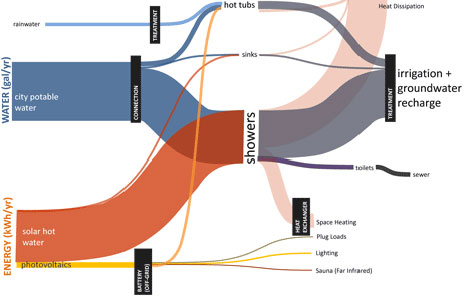 Wellness entrepreneur Nell Waters is attempting to raise £146,000 on crowdfunding website Kickstarter to build a prototypal ecological urban bathhouse from shipping containers in San Francisco.
Waters wants to create an "urban bathhouse for healthy hedonists" that could pop up on any available lot in the city and operate autonomously from the municipal power and water supplies.

The design of the SOAK spa was developed by San Francisco design studio Rebar, and consists of stacked containers arranged around a courtyard that house changing rooms, toilets, a lounge, a sauna, hot tubs and a roof deck.

"This container-spa joins the wave of tactical urbanism currently happening in San Francisco and other cargotecture projects that have created a local zeitgeist around the recognisably corrugated exterior," said the project team in a statement. "No city is better positioned to launch this first iteration of the mobile, pop-up spa."

A small garden next to the entrance would lead to an internal courtyard housing the reception, enclosed showers and two cold plunge buckets. Stairs would provide access to the roof lounge and an additional hot tub. Rainwater would provide half of the spa's water, while greywater would be filtered through plants and particle filers and used to irrigate a garden on the rear patio. All of the water used would be heated by solar hot water heaters and photovoltaic panels on the roof.

"The challenge that we set out in developing this proof of concept prototype is to use absolutely the least amount of water possible, use the least amount of energy possible - we try to catch as much as we can from the sky," explained Blaine Merker from Rebar in a video on the project's Kickstarter page.

The project team has engaged engineers to analyse the spa's energy performance and, if it achieves its funding target by 1 January 2014, will work on refining the structural criteria of the containers and assessing water usage with the aim of realising a two-container prototype sometime in 2014.