Over 1,200 Victorian-grown plants are drawing in thirsty crowds as part of the pop-up Urban Coffee Farm and Brew Bar in Melbourne. 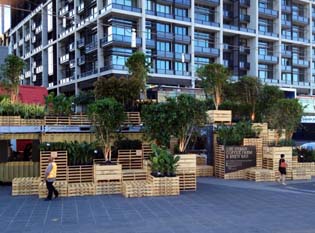 Over 1,200 Victorian-grown plants are drawing in thirsty crowds as part of the pop-up Urban Coffee Farm and Brew Bar, a collaborative effort between the Melbourne Food and Wine Festival and architect firm, HASSELL. 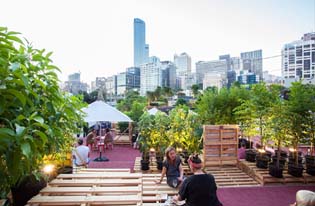 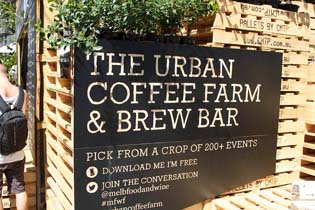 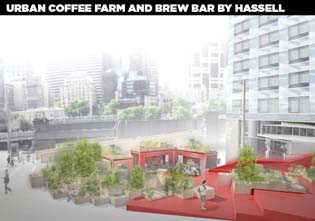 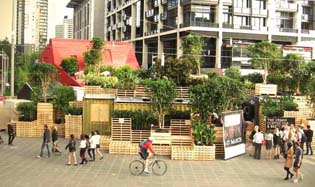 During the day time, the Urban Coffee House serves a range of beautiful coffee blends and by night the Brew Bar shakes things up with inspired cocktails.

The project’s design was overseen by one of Australia's premier design groups, HASSELL. The coffee farm atmosphere is designed to make you feel like you're in the middle of a Guatemalan coffee house. Pallets, packing boxes and shipping containers evoke the industrial side of the process which is coupled with coffee plants which create an equatorial feel. More than 125 Australian coffee trees create a mini urban rainforest along with 2,000 tropical plants locally grown in Victoria.

The plants for the Urban Coffee Farm and Brew Bar were supplied by Warner’s Nurseries; they have provided approximately 24 different species of plants which aim to engage the public to think about the logistics of where coffee comes from. Warner’s Nurseries managing director, Michael Warner said the addition of plant life to the Urban Coffee Farm is an exciting initiative which perfectly complements Melbourne’s wonderful café and garden culture and passion for delivering innovative ‘green space’ within the CBD.

“Melbournians are passionate about gardening and green space, which is why we were so keen to come on board and be a part of this fantastic installation. Imagine walking to work as you do every day, only to be greeted by this huge tropical garden in the middle of the city…it’s already causing a stir among passers-by which goes to show how much we Melbournians love to push the boundaries when it comes to landscape design”.

Michael said he was delighted to be involved in the Urban Coffee Farm, which he believes takes the concept of ‘greening our city’ to new levels.

“When we were originally approached by the Festival to see if we could help to create a tropical garden in Melbourne’s CBD, it was such a clever idea, so we thought why not take it one step further by showcasing species which could be easily replicated at home”.

“So that’s where the idea for our Victorian-grown tropical garden came from - all of the plants we have used in the Urban Coffee Farm focus on lush green foliage which creates the tropical feel, but selected for the Victorian climate so they will perform in gardens at home,” he said.

The Urban Coffee Farm and Brew Bar will be on display until March 17 at the Red Stairs in Queensbridge Street Square.

Click here for more information on the plants selected for the Victorian-Grown Tropical Garden.