Plans for a new global business hub in Tokyo include three mixed-use towers to be located in Toranomon Hills. The combined development is replete with integrated green space that includes an elevated park, rooftop gardens and sparkling waterfalls. 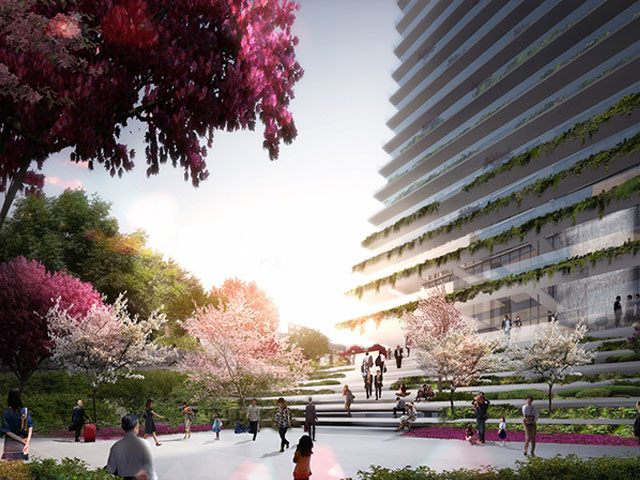 Japanese property developer Mori Building is developing a global business hub in Toranomon Hills in Tokyo, Japan. The development proposes the construction of three mixed-used towers and includes plans for an elevated park and integrated green spaces that link to the surrounding green areas and into the pedestrian boulevard of Shin Tora Dori. 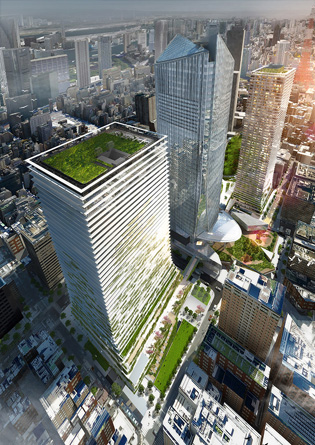 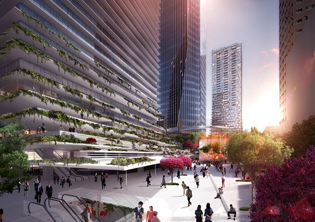 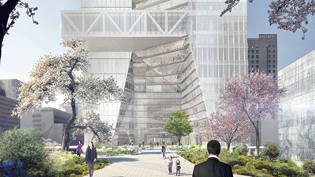 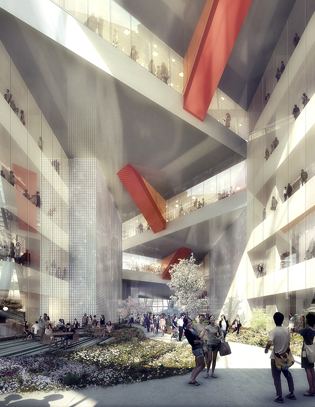 With plans to transform the area and create a more accessible space for international business interaction, the three proposed towers, named Toranomon Hills Station Tower, Toranomon Hills Business Tower and Toranomon Hills Residential Tower, will form the basis of the hub and connect to the adjacent cultural centre in the area.

Design by Shohei Shigematsu, director of OMA’s New York office, the proposed glass skyscraper will sit above a new subway stop that will be completed for the 2020 Tokyo Olympics. It will contain offices, hotel accommodation and retail spaces, in addition to the new Hibiya Line subway station.

"Toranomon Hills Station Tower serves as a key node that connects the new station to the other towers and the surrounding district," said Shigematsu.

An elevated park will be incorporated into the lower floors of the tower, linking it to the new pedestrian boulevard of Shin Tora Dori.

Shigematsu explains, "The axis of activity is designed to run through the base, extending vertically to wrap the tower; communicating the activity of the complex at an urban scale."

Though partial subway service will begin in time for the 2020 Tokyo Olympics, the Tornomon Hills Station Tower is not slated to open until 2022.

OMA’s Toranomon Hills design is just one of the towers proposed for the site being developed by Japanese-developer Mori Building. The two remaining towers - Toranomon Hills Business Tower and Toranomon Hills Residential Tower – have been designed by German firm Ingenhoven Architects. As the names suggest, the two towers will form office space and residential space within the new business hub development.

The Business Tower is a 185m tall structure that will sit to one side of the existing Toranomon Hills Mori Tower. Flanking its other side will be the Residential Tower, rising to a height of 220m to become Tokyo’s highest residential building.  A pedestrian run will extend from the residential tower that will be richly planted to form a stepped urban landscape, while a rooftop garden will be created to form a green public space that can be utilised by the businesses, residents and visitors of the hub.

Extending out from both buildings are balconies and awnings that will shade the building and provide a stepped profile and offer public landscaped areas that allow recreational activities and retreats for relaxation. In addition, a series of waterfalls will be added to reflect natural light and provide a water element to the design. The integrated green space will serve the dual purpose of providing an aesthetically pleasing environment in an urban area as well offering the ability to reduce air pollutants and enhance the areas microclimate.

The decks incorporated into the design will provide accessibility between the buildings, forming a cohesive and multi-layered space that combines the internal and external spaces, and serve a purpose in the overall energy-efficiency of the building. The building also includes green technologies such as high-performance glazing, rainwater harvesting, photovoltaic panels, and high-efficiency lighting.

Images (top to bottom): Ingenhoven’s design includes a stepped urban landscaping; the two towers design by Ingenhoven flank an existing tower on the site; the lower levels of Ingenhoven’s business tower provide free movement throughout the development; OMA’s mixed-use tower includes an elevated park; an upper atrium will in OMA’s station tower will offer a place for interaction.