Climbers are nature's speed kings. Given the right growing conditions, vigorous growers can cover metres in one season, giving you fast protection from both the sun and prying eyes. 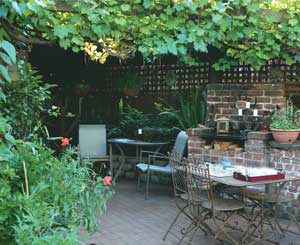 As the warm autumn sun steals in under a vine-covered pergola, you can sit back and relax in the best of both worlds. The dappled shade cools you on hotter days but, as leaves are shed and the winter sun travels lower in the sky, there’ll still be plenty of sunshine to keep you warm.

Climbers are nature’s speed kings. Given the right growing conditions, vigorous growers can cover metres in one season, giving you fast protection from both the sun and prying eyes. With so many to choose from, you can have glossy green or velvety leaves, beautiful flowers, wafting fragrance and even delicious fruit surrounding your outdoor room.

Climate control
An outdoor room needs to have a good microclimate so it’s a pleasant place to entertain, work or play. Unlike being indoors, you can’t shut out heat and cold, so you need to capture the right amount of sun and shade at different times of the year. Although you can use an awning, solid structures are notorious for letting heat build up underneath. Nothing casts better shade but still lets out heat like plants, which also have the added benefit of evaporative cooling from their moist leaves. A spreading shade tree is a great choice, or you can use climbers to create the perfect microclimate by growing them across a pergola, archway or trellis.

Light and leafy
All outdoor rooms need some enclosure to give then a room-like feel. Often there’s a house wall on one side but creating some sense of roof, and maybe an extra side wall, will make it feel much cosier and protected. An open pergola adds some roof without being heavy and oppressive and a trellis or open screen can work as a wall to define the limits of your room and give it a definite shape. But you need to keep a strong sense of the outdoors about your room, too, or you may as well be inside.

By making a place where you can still see the sky and be surrounded by plants, you’ll feel like you’re part of nature while still enjoying your creature comforts. Climbers are ideal for the job, adding leafy greenness to your pergola without the worry of invasive roots, and clothing your side screens in foliage and flowers. Instead of the hard lines of a timber or metal structure, you can introduce the blowsy informality of winding and trailing vines.

Perfect privacy
An outdoor room is a place where it’s nice to feel private, like you’re in your own calm oasis, away from the rest of the world. Don’t shut yourself in with solid walls and awnings; you can easily block views with strategically planted vines, either on wall trellises above the fence line or over a pergola or archway to obstruct views from above.

Well supported
As climbers are not self-supporting, you need a sturdy structure on which to grow them. Some smaller twiners, like mandevilla, are fine on fairly lightweight trellises but more vigorous vines, especially those that develop large, woody trunks, need a properly designed and built support. Wisteria is notorious for bringing down even robust pergolas, as it becomes extremely heavy and woody as it matures. Always over-engineer, going for thicker columns, stronger bolts and heavier rafters. 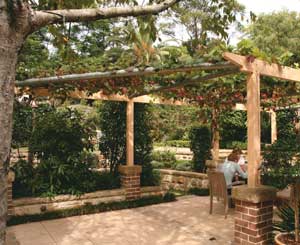 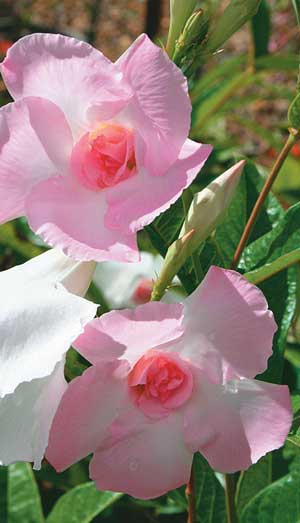 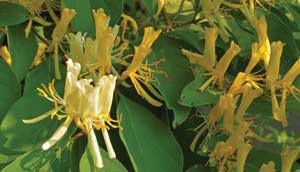 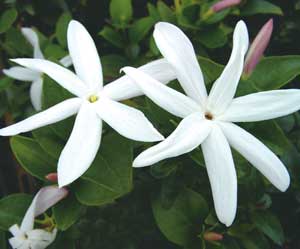 Climber growth habits
Apart from whether they twine, cling or scramble, climbers can either race to the top of a support while all the lower leaves fall, or stay clothed right to the ground. Each has its uses: on a pergola, bare stems against posts take up less room and lots of leafy growth up high gives you good shade coverage, but on a privacy screen you’ll want leaves down low, like you’ll find on star jasmine, wire vine, mandevilla and Boston ivy.

Starting off
Climbers grown in-ground need less watering as they’ve got room to really spread their roots. Plant them on the south side of a structure, as they’ll naturally grow northwards, towards the sun. Alternatively, fit in the biggest pot you can, even if the climber you’ve chosen is not that vigorous, as smaller pots are always at risk of drying out.

Choose the right climber for the support. Twiners need a narrow pole (such as a thick bamboo stake) to get them started and tendril climbers and scramblers work best on wire. Scramblers will need to be tied up until they’re tall enough to grow horizontally and you may need to de-thorn their lower stems.

Training and pruning
Give climbers close attention in the first year to get them growing as you want, by tying them up to supports and pruning off growth heading in the wrong direction. Any tight ties must be removed within a month before they ringbark the stem.

On a wall trellis, cut off any stems that come straight out; any to the side can be trained back as they elongate. To get a climber heading upwards, tie up stems vertically while they’re still green and pliable, as once they’re woody they will snap.

You can make pretty patterns against a wall by using strained wires in a criss-cross pattern and clipping a twining climber narrowly around the wire. Chinese star jasmine works well for this.

Check all climbers regularly to make sure they don’t get into house eaves, nearby trees and over the fence.

Fine vines
Research plants so you know how big they’ll grow, whether they’re suitable for covering a wall or a pergola and if they’ll thrive in your local climate. Always check whether any plant has weed potential in your area. In roughly ascending order of vigour in each category, you could try:


Fruit of the vine
Why not use your pergola climber for garden food, too? Passionfruit is a vigorous, tendril climber. Fruiting grapevine loves warm, dry climates, but check that it bears table grapes — unless you want to make your own wine! Kiwi fruit is a large, deciduous vine and you’ll need both a male and female vine for pollination. In cold southern zones, you can grow hops to make your own beer. The native apple berry, Billardiera scandens, has a sweet but astringent flavour like that of kiwi fruit.

Climbing tongue-twisters
Here are some fantastic words for your next dictionary challenge. Circumnutation describes how the active, growing part of a climber has a daily sweeping-around motion in one direction as it looks for support.

Thigmotropism is the very rapid growth response that a climber has to finding support where tendrils can wind around something in a matter of hours.

Twisting away
A common myth is that twiners spiral different ways in the northern and southern hemispheres as they follow the sun across the sky. According to Edwards, Moles and Franks (2007), the truth is that most go anti-clockwise when viewed from above, although it depends on the species.