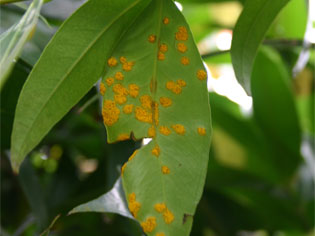 The threat of Myrtle rust to Australia’s ecosystems has prompted the Australian Nursery and Garden Industry to develop a Myrtle Rust Management Plan. The plan provides assistance for management of Myrtle rust on all plants from the Myrtaceae plant line. 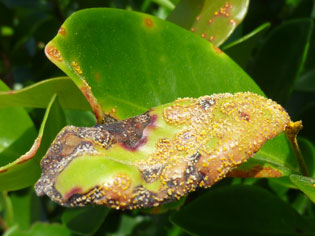 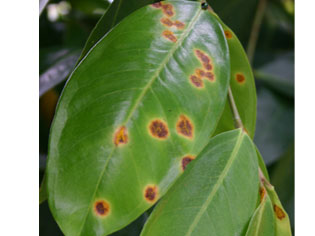 Myrtle rust (Uredo rangelii), native to South America is a serious fungal disease and believed to be the most significant threat to Australia’s ecosystems since the Europeans arrived. Affecting plants in the Myrtaceae family, including Australian natives like bottle brush (Callistemon spp.), tea tree (Melaleuca spp.), lillypillies (Syzygium spp.) and eucalypts (Eucalyptus spp.), it has the potential to infect all myrtaceous plants in both our built (gardens & landscape) and natural environments plus a range of industries (nursery production, timber, cut flower, etc) along the coastline of Australia.

Myrtle rust was first detected in April 2010 in the Central Coast area of New South Wales (NSW). By November 2010 Myrtle rust had infected over 140 premises across NSW and was detected in Queensland in December 2010. Analysis of the detections in state forests and nature reserves suggests that the disease may have been present in Australia for at least two years prior to detection.On December 22 2010 the Myrtle Rust National Management Group deemed the disease not technically feasible to eradicate. Due to the impact the disease could have across Australia it was agreed to implement a management plan to limit the establishment of the pathogen within industries and the natural environment.

The development of the Myrtle Rust Management Plan, by the Australian Nursery Industry, is in direct response to the agreed national position.

Robert Prince, Chief Executive Officer NGIA announced at the Landscaping Australia Conference in May that Myrtle rust could have a devastating impact on the Nursery industry.

“Nationally a $3billion dollar industry could lose more than $600,000, 000 in total production. The loss to our urban amenity values could be as high and potentially we could see billions of dollars damage in our natural environment,” he explained.

As a professional and responsible industry it is essential that growers, wholesalers and retailers implement the management strategies for Myrtle rust.

What can I do?