With humanity’s sights diverted from the Moon to Mars as the next habitat for habitability, the release of a 3D printed shelter designed to be erected on the Red Planetshould come as no surprise. 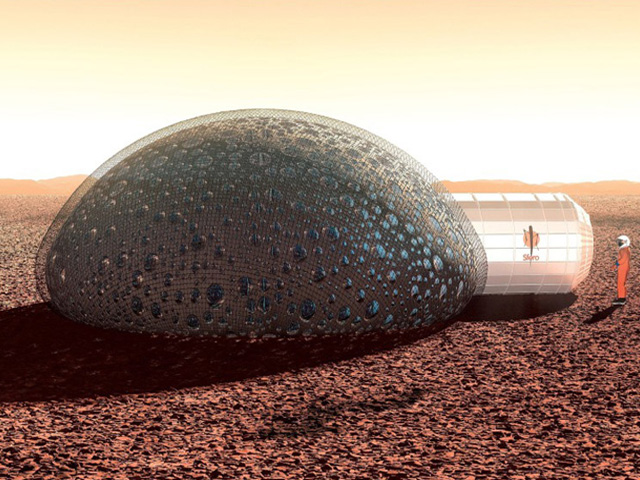 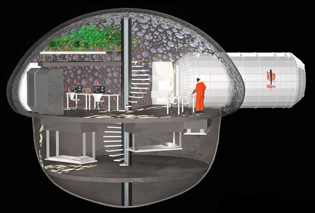 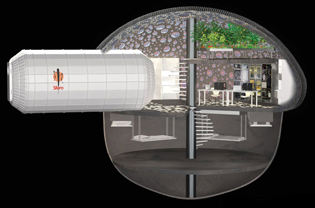 The imagined creation features an internal and external dome containing a hollow space between the two, which will be filled with a protective water barrier designed to safeguard against radiation. The internal dome is separated into two levels, linked by a spiral staircase.

Given the inhospitable external environment of Mars, it’s safe to say that outdoor landscaping would be something of a challenge! Luckily, the concept design of the Sfero indicates an area for growing plants indoors, with space for workstations upstairs and sleeping quarters below.

The pod shape of the design is a considered to be effective in offering a high resistance to Mar’s atmospheric conditions. The essential anchor point of the design consists of a central rod that would be drilled into the planet’s surface, from which two robotic arms will be extended to harvest soil for construction.

The planet’s soil, which contains a profusion of iron oxide, will be utilised in the construction of the habitat itself – forming the raw material to be used in the 3D printing process. Fused together by laser, the powered iron particles will be converted to the shell layer by layer through the printing process.

The protective water barrier between the inner and outer domes of the habitat will be provided by melted permafrost, also collected from the planet’s surface. Fabulous founder Arnault Coulet believes the water layer could be a "permanent psychological reminder of the main element of the mother planet – water constituting a sort of protective amniotic fluid for humans."

The Sfero was created in response to a design competition launched by NASA, calling for 3D printed habitats for Mars. Despite the competition only being open to US residents, Fabulous – a French 3D printing company – was nonetheless presented as a standout design.

With the Mars One mission the next big space adventure, the planet’s unique environment provides a new dimension of design challenges, offering humans the opportunity to conquer new frontiers in the built environment.