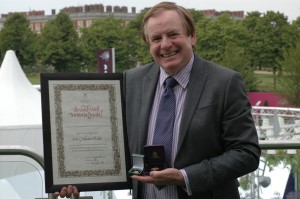 Vice President of the Horticultural Media Association Australia and Better Homes and Gardens presenter  Graham Ross has been awarded the prestigious Royal Horticultural Society (RHS) Veitch Memorial Medal (VMM) for his contribution to horticulture in Australia and internationally.He was presented with the prize at a RHS function in London on Monday 4th July.

Graham was overwhelmed to receive the award. He revealed, “It is an enormous honour for me to receive this award. I just love gardening and have been a gardener since childhood.”

The VMM is an international prize issued annually by London’s to persons who have made an outstanding contribution to the advancement of the art, science or practice of horticulture. It is the highest honour that the RHS can give to anyone born outside the UK.

Graham explained, “Working as a horticulturist in Australia and around the world has been enormously enjoyable, and being able to share that knowledge and those experiences with so many people, it doesn’t get any better.”

Graham is only the fourth Australian to receive the VMM since its inception in 1870.
He started his career in gardening working at the local nursery aged eleven, later training and graduating in agronomy, horticulture, park administration, greenkeeping, landscaping and teaching. Graham worked as a seedsman, arborist, landscaper, nurseryman and park superintendent for 30 years and was a teacher of horticulture for 10 years.
He has presented close to 700 episodes of Channel Seven’s Better Home’s and Gardens . The Ross family’s Garden Clinic radio show has broadcast every week on Sydney’s 2GB since 1980 and can now be heard on Melbourne’s MTR. The Garden Clinic Club is the biggest garden club in Australia, with membership worldwide, while Ross Garden Tours is the world’s largest specialist garden tour operation.