GEORGE STREET PAVES THE WAY FOR A PEDESTRIAN-CENTRED SYDNEY


The City of Sydney is contributing $220 million to the NSW Government's light rail project to make George Street one of the world's great plazas. 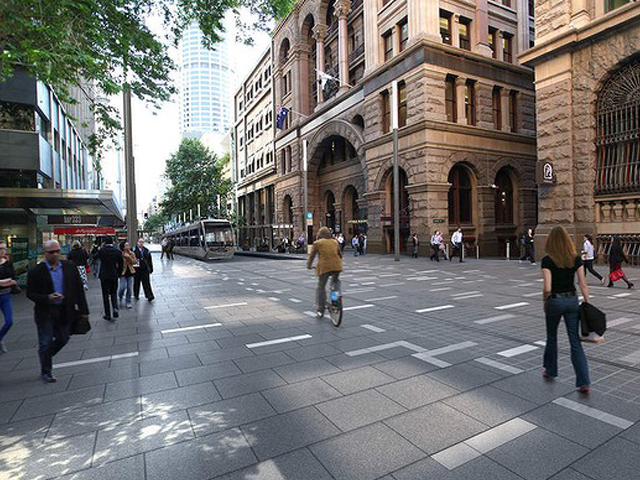 The exhibition, Next stop: 21st century George Street reveals how George Street will be transformed into a vibrant pedestrian-friendly retail boulevard. The public are encourage to visit the exhibition and provide feedback on key design issues before they are finalised. 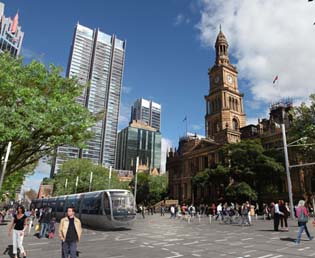 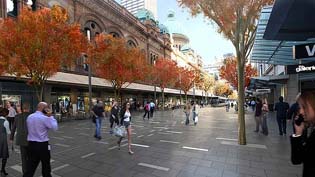 The City of Sydney is contributing $220 million to the NSW Government’s light rail project to make George Street one of the world’s great plazas, with 25,000 square metres of roadway turned into a huge, tree-lined pedestrian boulevard.

“Light rail gives us a chance to revitalise the entire city centre, not just transforming George Street but also the laneways that run off it, making the city an exciting place to explore,” Lord Mayor Clover Moore said. “At the moment, George Street is choked by day and drab at night. This exhibition shows we can make it a wonderful wide boulevard where people will want to walk, shop, dine and meet up with friends.”

People who live, work and visit the city are encouraged to come and visit the exhibition, and give input into the future design of their community. Feedback is desired on how much of George Street should be closed to cars, whether the light rail should operate with no overhead wires in pedestrian areas, and whether it can operate safely without pedestrian barricades as do trams in Melbourne.

The architect of converting George Street into a 21st century boulevard, leading Danish urban designer Jan Gehl, first called for removing cars from George Street seven years ago. He said the pedestrianised area should be made as big as possible because international experience showed that’s what people want.

“We’ll see a whole promenade culture in Sydney, which we already have in a number of cities around the world – most notably and remarkably in New York. There, they have closed greater parts of Broadway and turned a major traffic street into a major people street where thousands of people now sit, relax and dine, rather than shuffling around,” Jan Gehl said. Gehl has worked in New York, Copenhagen and London creating designs for delivering and developing better public spaces.

The upgrade of George Street will see over 200 new trees planted, a five-fold increase in the tree canopy as well as new lighting to create a more dramatic and appealing night-time ambience. New street furniture and public art installations will add to the area’s appeal.

Monday to Friday: 8am – midnight

For more information and to provide feedback visit the Sydney Your Say website.