Bangkok Project Studio has completed a multipurpose event courtyard as part of the Elephant World and Elephant Museum complex in Thailand, providing a space that encourages community recreation and reconnects the Kui people with the native elephants. 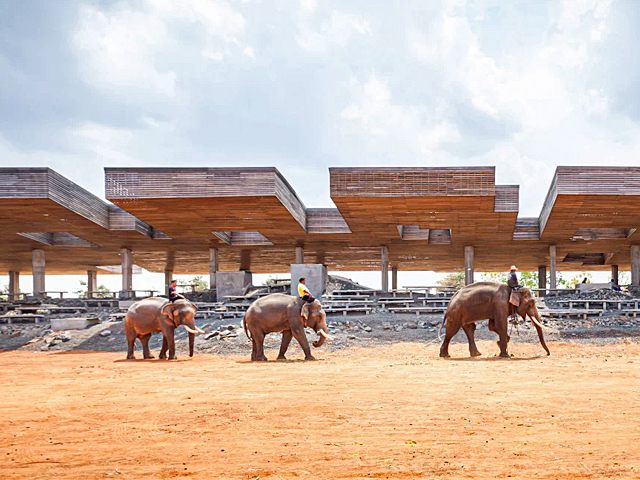 The site, which also features an Elephant Museum designed by the same firm, seeks to provide a source of stable income for the Kui people, an ethnic group in Surin, northeastern Thailand, and their elephants. Traditionally, a Kui house includes space for humans and space for elephants under the same roof.

Bangkok project studio explains that, over the past 50 years, the forest of Surin was destroyed for commercial purposes. The Kui and their elephants, who had relied solely on the forest, suffered extreme droughts, shortages of food, and medicinal plants that the forest once provided. Many elephants were forced to work in camps, many with unsuitable living conditions. Elephant World is a governmental project that seeks to bring the Kui and their elephants back to their homeland in a safe and prosperous environment. 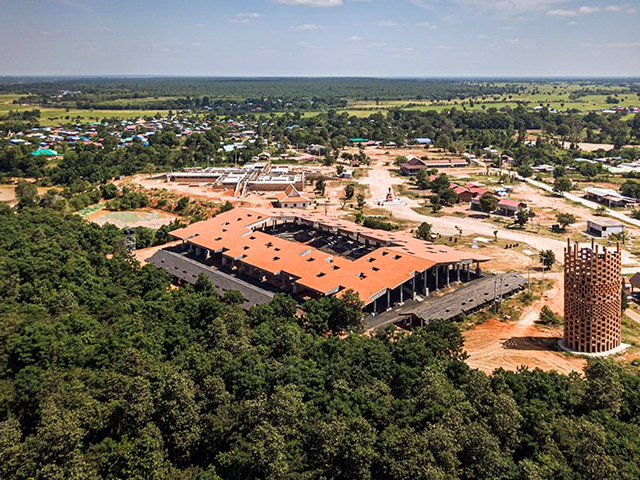 Named the Cultural Courtyard, the project is partially enclosed by a large roof that measures 70x100 metres. The canopy, which remains open at its centre, is 1.5 metres thick and is punctured at various points to ensure ventilation. Below, a large open space is established that can be used for recreation, as well as cultural events and religious ceremonies for both humans and elephants.

To provide water for the 200 elephants that live on the site, a rainwater collection pond was dug next to the courtyard. The excavated soil was then used to form six mounds that surround the courtyard on three sides. Strengthened with basalt rocks, the differently sized mounds evoke the rolling soil in which elephants roll around to protect themselves from insects and keep themselves cool. 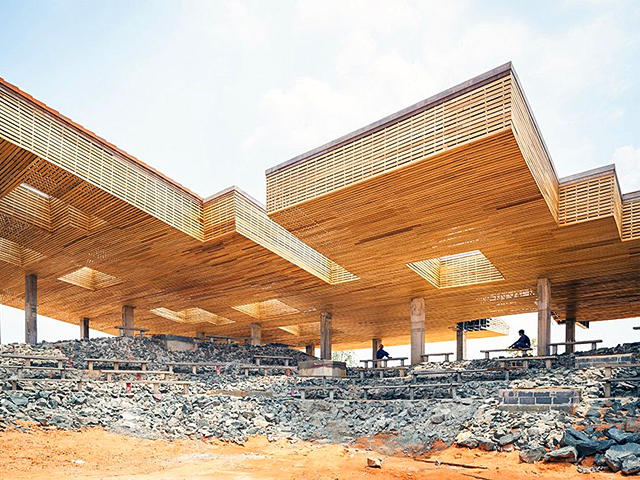 The basalt used to strengthen the mounds was sourced from a location 40 minutes from the site, a process that had unexpected benefits for a neighbouring region. “When basalt is mined to the groundwater level, the water wells up, forming a water reservoir,” explains the design team. “The construction of the playground, consequently, creates another water reservoir in the neighbouring district.”

On top of the mounds, six rows of concrete benches provide seating for up to 800 visitors. Meanwhile, trees will eventually be planted in the 42 concrete pots that are aligned with the openings in the roof canopy. These trees will provide shade and food for the elephants. The Kui can now care for the newly-planted trees, maintain the water sources and revive the forest,” say the architects. “The bond between the two is the catalyst towards a sustainable future. In this future, they will live under the same roof again, just like their ancestors did.”