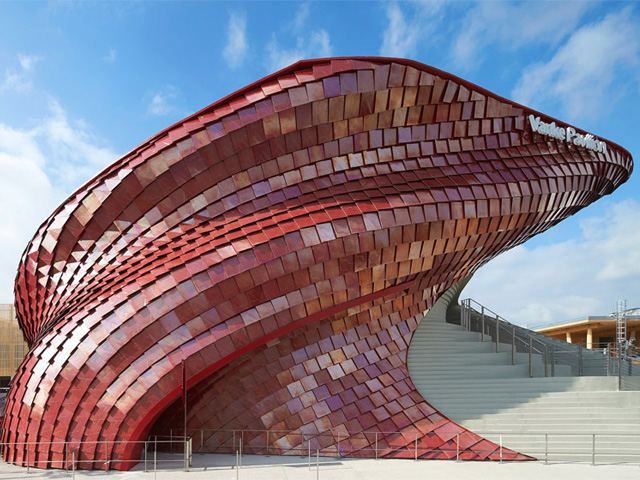 Clad in three dimensional ceramic tiles, this dragon-inspired pavilion is one of the highlights of this year’s Milan Expo, and marks the first time in the world expo's history that a private company has its own pavilion. 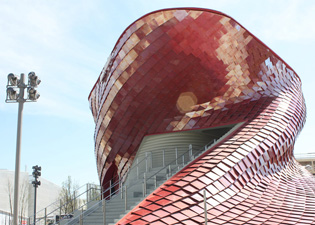 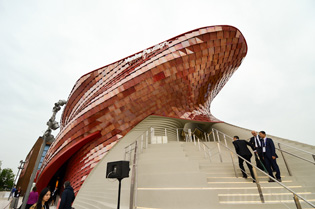 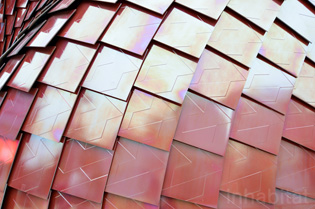 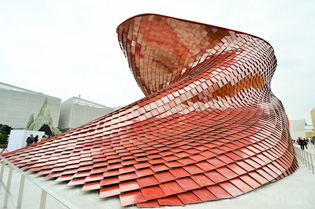 The spiraling structure features staircases wrapping around its perimeter and a ‘forest of bamboo’ contained inside.

Designed by Daniel Libeskind and clad in three dimensional red ceramic tiles fashioned with help from Casalgrande Padana, the Vanke pavilion has a twisted form that culminates in a rooftop garden and symbolises a traditional Shitang or dining hall.

Designed for China's largest real estate company, the pavilion is located on the edge of Lake Arena at Milan Expo 2015 and highlights the importance of food and socialisation to the nation's rich culture.

Unusual in its design, the 12-metre high pavilion features replicated custom tiles to create a reptilian effect, like the scales of a snake or lizard in motion. These tiles feature a metallic surface, so they appear to change colour from red and pink to gold and white. And that sense of fluid twisting is present throughout, with a giant white staircase winding through the heart of the pavilion.

The tiles also have self-cleaning properties, and scrubs pollution from its surrounding environment.

Inside, 300 screens on bamboo armatures show short films showcasing the importance of Shitang to every day Chinese people. The staircase reaches the roof, the crown of the pavilion, where a terrace offers views of the nearby lake and grounds.

“For one of China’s leading economic organisations, the choice to be in Milan for six months, in the heart of Europe, is also strong evidence of another of the aims of the Universal Exposition: the creation of contacts and business networks, an exchange of innovative technologies, the possibility for mutual investments that will form one of the most important legacies of the Expo – for Milan, for Italy and for an increasingly influential China in the international economic landscape,” said Giuliano Pisapia, Mayor of Milan.