CITIES CAN GET GREENER BY 2030


The world's urban areas will more than double in size by 2030, presenting an opportunity to build greener and healthier cities, a U.N. study showed. 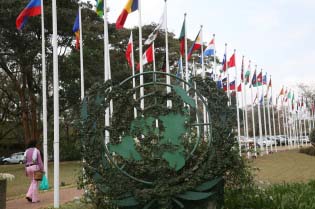 The world's urban areas will more than double in size by 2030, presenting an opportunity to build greener and healthier cities, a U.N. study showed recently.

Simple planning measures such as more parks, trees or roof gardens could make cities less polluted and help protect plants and animals, especially in emerging nations led by China and India where city growth will be fastest, it said.

"Rich biodiversity can exist in cities and is extremely critical to people's health and well-being," wrote Thomas Elmqvist of the Stockholm Resilience Centre, scientific editor of the Cities and Biodiversity Outlook.

The world's urban population is expected to surge from just over 3.5 billion now to 4.9 billion by 2030, according to the assessment by the U.N. Convention on Biological Diversity.

At the same time, the area to be covered by cities will expand by 150 percent, it said.

"Most of this growth is expected to happen in small and medium-sized cities, not in megacities," according to the report, issued to coincide with a U.N. meeting on biodiversity in Hyderabad, India.

More green spaces in cities can filter dust and pollution and soak up heat-trapping carbon dioxide. Some studies have shown that the presence of trees can help reduce asthma and allergies for children living nearby, it said.

And the study said that cities were also home to a wide range of animals and plants.

More than 65 percent of Poland's bird species are found in Warsaw. In South Africa, Table Mountain national park, rich in wildlife, is surrounded by the Cape Town municipality. In the United States, Saguaro national park is just outside Tucson.

More tree cover in cities can help cool them in summers, meaning less need for air conditioning, it said.

"Recent studies highlight the importance of even small urban gardens in providing habitat for native pollinators such as bees, which have declined alarmingly in recent years," the study added.

And it pointed to real estate arguments for a greener city.

In the United States "city parks increase the value of nearby residential properties by an average of 5 percent; excellent parks can provide a 15 percent increase," it said.

Expansion of cities would often displace farms nearby, meaning that agriculture would have to shift elsewhere. That in turn would require care that new farmland did not, for instance, lead to damaging deforestation.

"For the next 40 years urban growth will consume land approximately three times the size of France ... this is often the most prime agricultural land," Elmqvist said.

Many existing cities are trying to get greener. In Bogota, Colombia, residents exercised more after city authorities introduced measures such as closing some roads on weekends and improving bus transport.

Cities can get greener by 2030
Universal Magazines