A group of libertarians in Europe hope to create their own sustainable utopian city-state consisting of layered stack structures that are powered by genetically engineered algae. 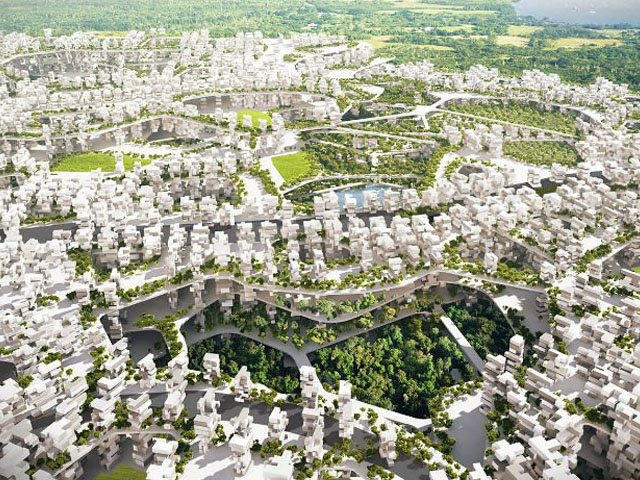 The founders of the Free Republic of Liberland proclaimed the establishment of the ideologically aligned micronation last year, designating as its sovereign territory a mere three square mile plot of land sandwiched between Serbia and Croatia.

Liberland’s founders have since unveiled their preferred vision for the completed city-state after staging an international design competition that attracted entries from architectural practices around the globe.

The winning design, produced by Manhattan-based architecture firm RAW-NYC, envisages a city consisting of suspended horizontal platform structures, each of which hosts its own densely planned neighbourhood of compact buildings.

The horizontal structures can be layered or stacked on top of each other in order to gradually increase the scale of the city and accommodate future population growth should the libertarian city-state prove a popular draw with ideologically motivated migrants.

In order to shore up walkability and achieve Liberland’s vision of a car-free society, each of the neighbourhoods will feature convenient access to public transit, as well as an extensive network of interconnected bike and pedestrian paths.

“It’s a very walkable city where you could reach any point at a reasonable time whether you use the train or you walk,” said Raya Ani, director of RAW-NYC.

In addition to dispensing completely with vehicular transport, Liberland’s designers hopes to further enhance the sustainability of the city by incorporating extensive swathes of green space into its built assets and infrastructure.

Green walls and roofs on Liberland’s building will help keep temperatures cool during spots of torrid weather, as well as help deal with rainwater runoff when the city’s hit by heavy storms.

The most innovative and ambitious form of green space envisaged by Liberland, however, are the colonies of genetically engineered algae slated for installation on the undersides of the city’s horizontal platform structures.

The algae will not need sunlight to flourish, and could serve as an alternate source of energy for Liberland’s residents alongside its proposed solar power and waste-recycling installations.

While Liberland has already proved highly popular with potential migrants, with as many as 400,000 aspiring citizens signing up for residence online, the feasibility, let alone the fate, of the proposed city-state still remains uncertain.

The plan first requires permission from Croatia and Serbia for the incorporation of their sovereign territory into the nascent micronation. Liberland’s founders then hope to house the country’s inaugural citizens in boathouses on the Danube River before selling off plots of land to residents via an online vending process.

Even if Liberland eventually proves to be a mere pipe dream on the part of its idealistic founders, however, the innovative concepts of arranging cities in layered stacks and using algae colonies as an alternative energy source could still make a vital contribution to urban development in future.