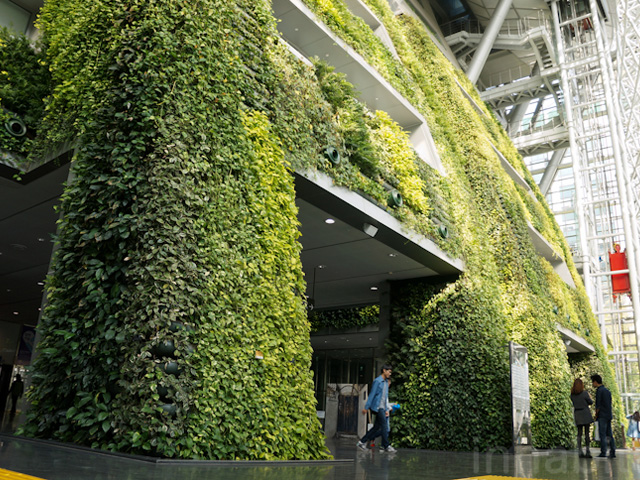 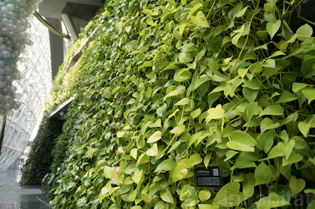 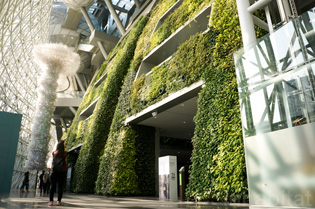 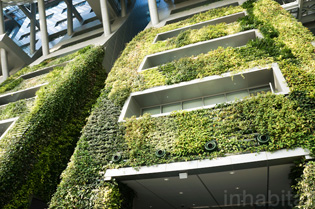 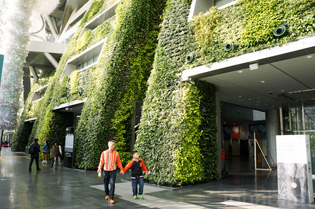 Designed by iArc Architects, the seven-story-high vertical garden was created to complement the new City Hall’s environmentally-friendly features, including its numerous renewable energy sources from solar power to geothermal energy. Approximately 65,000 plants from 14 different species grow in the garden, which spans an area greater than 17,000 square feet.

When the 13-story new Seoul City Hall was first unveiled in 2012, the curvaceous modern glass building sparked controversy for its incongruity in style with the former city hall, a preserved colonial-era stone structure that sits adjacent and has since been remodeled into a public library.

In the following year, the city installed the enormous green wall in hopes of softening the glass-and-steel appearance and to reinforce the building’s environmentally-friendly and energy-saving design.

Made up of cascading buckets of lush plants, the massive green wall serves as an indoor air filter that sucks in pollutants and fine dust. The vertical garden also helps save energy costs by regulating indoor temperatures and humidity levels. The City Hall’s additional energy-efficient features include the complex heat exchanger and pump system that meets nearly half of the building’s heating and cooling needs. Integrated photovoltaic rooftop panels provide 29% of the building’s energy through solar power. The perforated floors are heated with geothermal energy.

Nearly 7,000 triple-glazed, low-e glass panels clad the building and provide superior insulation to reduce heat loss while allowing solar gain. The building’s curvaceous silhouette, which is partly mirrored in the curved green walls, is both a nod to the eaves in traditional Korean architecture as well as an energy-efficient feature that helps mitigate solar heat gain.