A new concept for a twisted tower and vertical garden city has been unveiled by two Berlin architects. 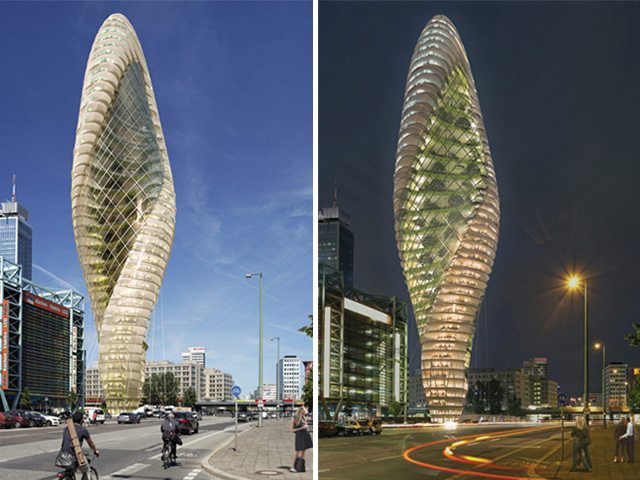 Architects Agnieszka Preibisz and Peter Sandhaus have unveiled a vertical garden city skyscraper for Berlin, which resembles a twisted figure-8 structure, which curves around elevated gardens and is supported by cable. 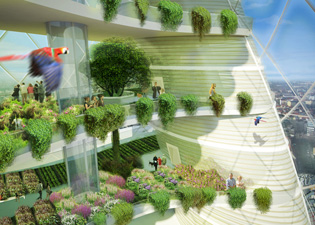 Agnieszka Preibisz and Peter Sandhaus, who are both based in Berlin, developed the design for ‘Green8’ as a contribution to a new masterplan for the eastern quarter of the city.

Agnieszka Preibisz said "the state of society in the twenty-first century requires that we develop new visions for living in densely populated inner cities. This process inherently triggers an essential confrontation of material and social values, and so there is a nascent yearning for an architecture that offers a high degree of potential for community."

The architects have planned a network of gardens and greenhouses that would slot into the two hollows of the figure-of-eight, intended to serve a growing desire among city dwellers for self-sustaining gardening. Green8 also offers food production and sport and leisure activities. Residences are also arranged to encourage neighbours to interact with one another, fostering a sense of community.

"While in social networking, the border between the public and the private spheres is being renegotiated, architecture and urban planning of cities such as Berlin lags behind these significant social and demographic changes," Preibisz explains.

Green8 is designed for a site on Alexanderplatz. The architects are now consulting with an engineering office to assess the viability of the structure.