UNDERSTANDING PHOSPHOROUS; IS IT NECESSARY FOR NURSERY CROPS?


In a five-year study, researchers Jake Shreckhise, Jim Owen and Alex Niemiera determined how much phosphorous is necessary to produce a marketable crop for containerised nurseries. Read an extract of the report here. 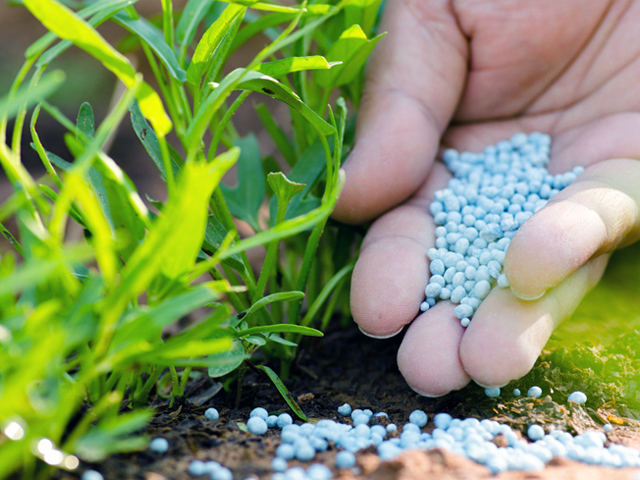 Fortunately, many of the available controlled-release fertiliser formulations can achieve this goal. As long as all macro and micronutrient levels remain at or above the sufficiency threshold during active crop growth, plants will thrive. Nutrient toxicity or salt burn is uncommon if plants are fertilised according to the product label and is easily avoidable with proper monitoring of substrate electrical conductivity.

Although many controlled-release fertilisers can produce a saleable crop, not all result in a high nutrient use efficiency (i.e. the percent of applied nutrients used by the plant). This is particularly true for phosphorous (P) as often, less than half of the phosphorous applied to a container-grown plant is actually used by the plant. Over the past five years we set out to better understand where phosphorous goes and how much is needed to produce a marketable crop. 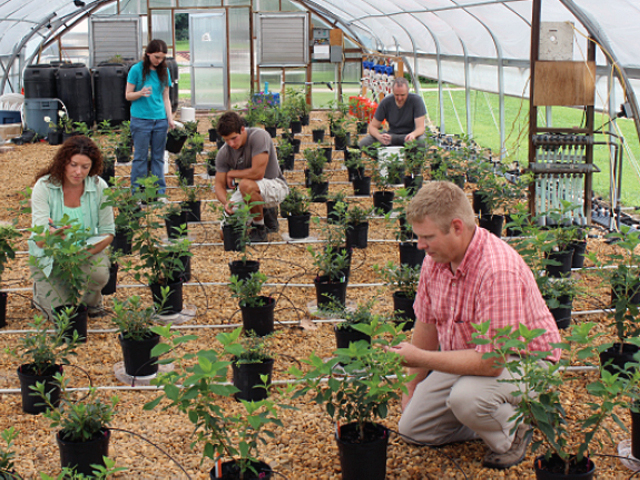 A CLOSER LOOK AT PHOSPHOROUS

Pine bark- and peat-based substrates have little ability to retain phosphorous, causing phosphorous fertiliser to leach from containers during irrigation. In terms of plant needs, conventional controlled-release fertilisers often provide phosphorous at levels well beyond the minimum necessary amount to maximise crop development. While these excess phosphorous levels result in maximum growth, a consequence is that much of the fertiliser is wasted—it leaches from the container before being absorbed by the plant.

Nursery research has repeatedly shown that healthy containerised woody crops fertilised with a conventional controlled-release fertiliser formulation (i.e. six percent P2O5) absorb between only seven percent and 57 percent of the phosphorous applied. The proportion of applied phosphorous that is used by the plant can be increased by decreasing the phosphorous supply within the “adequate” range. Doing so not only improves fertiliser use efficiency and reduces the amount of bought phosphorous wasted, it can also help minimise phosphorous runoff from nursery sites to surface water.

Over the past five years, the Horticultural Research Institute, Virginia Nursery and Landscape Association, Virginia Agricultural Council, Centre for Applied Nursery Research, and a USDA-NIFA funded grant (CleanWateR3), have provided the means to support both basic and applied research to yield answers to two questions:

Growth response of holly, azalea, and hydrangea potted in a lime- and micronutrient-amended pine bark-only substrate and constant-liquid-fed for 80 days. The five liquid fertilisers used contained a range of 0.5 to 6 ppm phosphorous and non-growth-limiting levels of nitrogen and potassium. 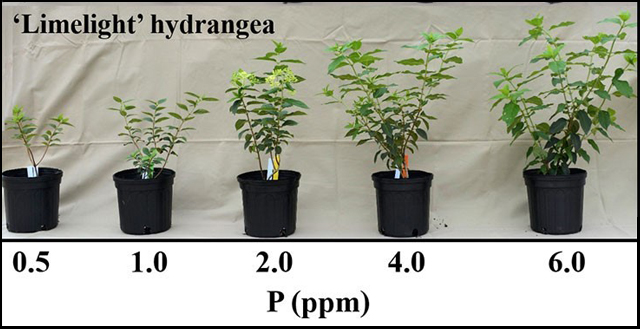 In our first experiment, we utilised various low-P liquid fertilisers to determine the minimum phosphorous concentration needed to maintain maximal growth of containerised ‘Limelight’ hydrangea, ‘Helleri’ holly and ‘Karen’ azalea. Current best management practices suggest 5-15 ppm phosphorous be maintained in substrate solution when producing nursery crops. However, the majority of previous research did not adequately investigate plant response to phosphorous concentrations less than 5 ppm. Therefore, plants in our research were constant-liquid-fed with five liquid fertilisers that contained a range of 0.5 to 6 ppm phosphorous and non-growth-limiting levels of nitrogen and potassium.

In the next experiment, nine-month controlled-release fertiliser formulations with one to four percent P2O5 were applied to ‘Helleri’ holly and Bloomstruck hydrangea to compare growth response to plants fertilised with a conventional nine-month, controlled-release product. This experiment was conducted in USDA Hardiness Zones 6 (Blacksburg, VA) and 8 (Virginia Beach, VA).

Our results for ‘Helleri’ holly were inconclusive since holly growth increased with increasing phosphorous application rate in hardiness zone 8, but responded minimally in hardiness zone 6. Conversely, Bloomstruck hydrangea responded similarly in both Zones 6 and 8, with maximal growth attained when fertilised with 18-3-12, a 50 percent reduction in phosphorous compared to a conventional 15-6-12 controlled-release fertiliser. The prospect of a 50 percent reduction in phosphorous fertilization could have major implications since hydrangea is the second leading deciduous shrub produced in the U.S.

Concurrent with our applied research, we conducted several laboratory experiments to better understand the effect of dolomitic limestone and a sulphated micronutrient fertiliser on phosphorous leaching and plant-availability when applied as controlled-release fertiliser. This was accomplished in two studies, first in fallow containers, then in substrate of containerised crape myrtle. In both studies, pine bark substrate was either non-amended or amended with dolomitic limestone, micronutrients, or both.

In summary, phosphorous fertility should be targeted to a particular species’ needs and can be affected by production location, substrate, fertiliser source, and watering practices. Additionally, greater amounts of phosphorous may be absorbed by the plant than is needed to improve crop growth. Hence, current foliar phosphorous sufficiency ranges for many ornamental plants may be anecdotal if determined when luxury consumption was occurring. When fertilising with liquid alone, applied phosphorous concentration can be less than or equal to 5 ppm for hydrangea, holly and azalea.

When supplementing controlled-release fertiliser with liquid feed, additional phosphorous is most likely unnecessary; therefore, consider a nitrogen-only or incomplete (nitrogen and potassium) supplemental liquid fertiliser. Our experiments on using low-P controlled-release fertiliser formulations suggest 4 percent P2O5 can be used across containerised ornamental crops. However, phosphorous content may be further reduced to 3 percent P2O5 when growing some shrub rose and Hydrangea macrophylla taxa.

Additionally, amending the substrate with lime and/or micronutrients reduces phosphorous availability and subsequent phosphorous leaching. We strongly urge growers to experiment with low-P fertilisers to ensure these fertilisers can be successfully integrated in their unique production systems before widely adopting a low-P regime. The benefit of not putting dollars or phosphorous down the “drain” can keep our industry proactive to possible future regulatory pressure and preserve our industry’s title as “green.”

Understanding Phosphorous; Is it Necessary for Nursery Crops?
Universal Magazines 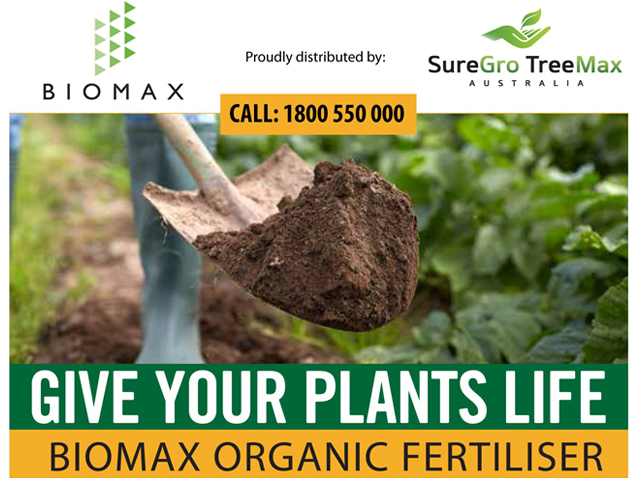 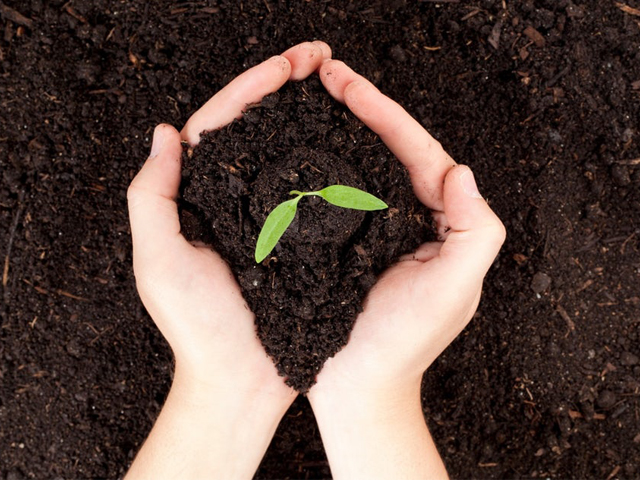 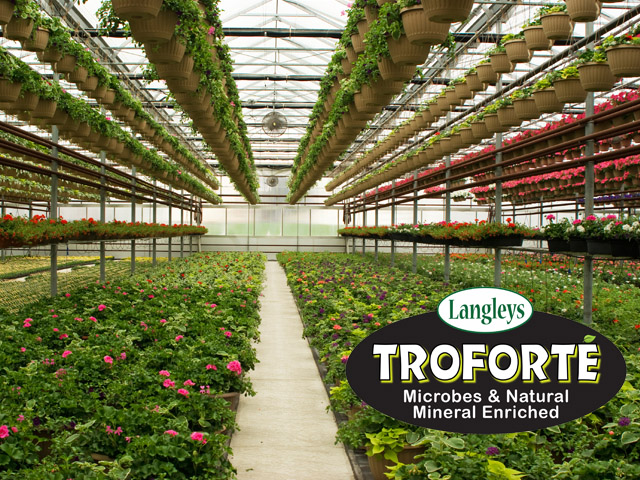