This vertical squatter structure provides a unique housing solution for an impoverished fishing community in India. 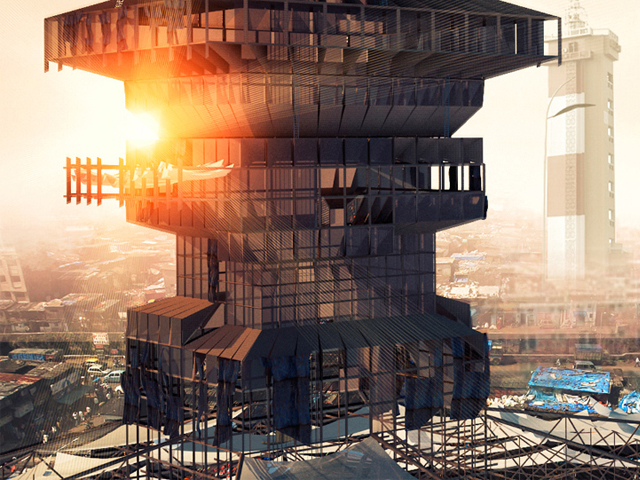 The "Shanty-Scraper" is a vertical tower proposal designed to provide housing for impoverished fishermen in the slums of Chennai, India. The Shanty-Scraper would be built from recycled materials found within the city, and would combat the slum's urban sprawl by sheltering its residents vertically.

India’s slum population is expected to surge to 104 million by 2017, and as the nation’s disparity between the rich and poor deepens, the number of people living below the poverty line has doubled over the last decade.

The Nochikuppam slum in Chennai is home to 5,000 fishermen families living in less than 1,500 shanties, making it the third largest slum dwelling amongst the Indian metropolises.

Shanty-Scraper is a vertical squatter structure comprised of post-construction debris such as pipes and reinforcement bars that crucially articulate the structural stability. Recycled corrugated metal sheets, regionally sourced timber and thatch mould the enclosure of each dwelling profile and lend to their vernacular language.

The double height semi-enclosures serve as utility yards and social gathering spaces. The vertical transportation is fragmented into multiple plank lifts that are constructed from a simple mechanically driven lever and pulley contraption.

The rhythmic timber lattice membrane structure at the ground level houses the public seafood market, and forms the first level of defense against future tsunamis. The high rise typology serves as a vantage point for the fishermen to gauge high risk waters and during emergencies.