As dense cities struggle to find space for new buildings and amenities, city waterways are being explored as a platform to facilitate green infrastructure. 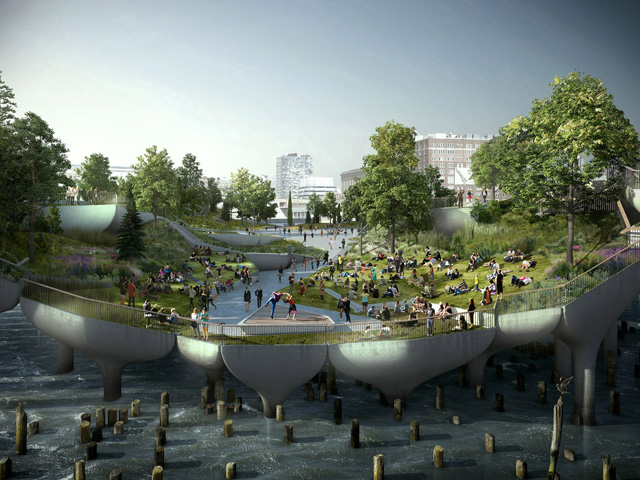 Building rooftops, walls and even unused railway lines have become popular places for greenery, but now ‘floating’ greenery atop unused piers, bridges or water is also a feasible option. 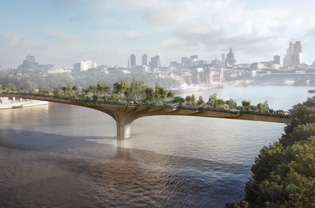 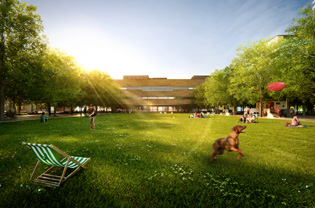 The term floating parks can be interpreted in a number of ways according to Warwick Savvas, senior associate at ASPECT Studios.

New York is receiving global attention for an approved green space atop the Hudson River, the largest open space project to be completed in the city since Central Park.

The Hudson River Park Trust (HRPT) and The Diller – von Furstenberg Family Foundation are behind the Pier55 project, which will create 2.7 acres of public park and performance space.

The architects of Pier55, Heatherwick Studio, are also the architecture firm behind London’s Garden Bridge.

The bridge will sit across the River Thames connecting North and South London. Along with offering commuters a safe walkway, it encourages pedestrians to stop and enjoy the greenery and river view.

Dock Square at Victoria Harbour is another green open space created on a piered structure.

“These types of projects have merit as they are often associated with integrating transport systems with open space,” Savvas said. “When you consider the shortage of available land in large inner cities for green open space it makes sense to use these projects to create more.”

There are also ‘working’ parks – floating wetlands that feature planted elements sitting atop the water to clean it.

“These are constructed reed beds that are installed into a water body,” Savvas said. “Their primary function is to increase the area of submerged and ephemeral vegetation so that the quality of water for the water body can be improved through bio filtration.”

The Netherlands is home to a recycled park proposal that would retrieve plastic waste from the river Nieuwe Maas just before it reaches the North Sea.

ASPECT Studios is also working on a project for Victoria Harbour in Melbourne which utilises floating wetland modules to improve water quality and boost biodiversity.

Savvas noted that all green infrastructure elements need to be considered concurrently on their merits and are project specific.

“Floating parks, constructed wetlands, increases in the tree canopy coverage (the Urban Forest), rain gardens, as well as green roofs, walls and facades should be evaluated and included where appropriate - provided they can be justified,” he said.

“Green infrastructure elements have both public and private benefits. The private benefits are more easily measurable (such as the increase in property value, savings on the coast of managing storm water, reducing energy demand on hot days and so on).”

While public benefits are a little more challenging to qualify, Savvas said these can include a reduced urban heat island effect or an increase in health, well-being and productivity for city dwellers, employees and park visitors.

With the benefits quantified, concerns are also rising over the implications on water during the construction and ongoing maintenance of a floating park.

He also believes that all green infrastructure in urban areas should integrate water supply for irrigation that includes on-site harvesting of storm water and recovery/re use of runoff.

“I think that with the pressures of urbanisation the increase in demand for green open space will need to be met by providing it in locations other than the traditional on-ground city block," he noted. “This includes providing it on newly created land such as floating parks, but also built into the fabric of the city in other ways such as elevated structures, bridges, walkways, as well as on and up buildings.