The international icon for Sydney celebrates 80 years since opening on March 19, 1932 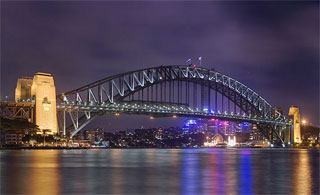 The international icon for Sydney celebrates 80 years since opening on March 19, 1932. 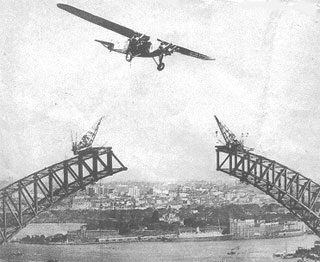 The bridge, nicknamed "The Coathanger", is crossed by more than 160,000 vehicles every weekday and is climbed by many thousands of tourists every year.

History of the Sydney Harbour Bridge

Work first began on the Sydney Harbour Bridge in 1924 and it took 14,000 workers eight years to complete. As many as 800 families living in its path were displaced without compensation.

The world's largest steel arch bridge, at 1149m-long was designed by engineer Dr John Job Crew Bradfield and NSW Department of Public Works officers.  The foundations, which are 12 metres (39 feet) deep, are set in sandstone. Anchoring tunnels are 36 metres (118 feet) long and dug into the bedrock at each end. Large bolts and nuts are used to tie the thrust bearings onto their supports. With an arch span of 503m and clearance for shipping under the deck at 49m, the total steelwork weighs about 52,800 tonnes.

The Sydney Harbour Bridge design had to perform functionally and be pleasing to the eye, so the four pylons which stand about 90 metres above the average water level are placed mainly for aesthetic reasons on each corner of the bridge. The pylons are made of concrete and covered by grey granite from Moruya on the south coast of New South Wales.

In 1932, when it was opened, it was the longest single span steel arch bridge in the world. Maintenance after the completion became the responsibility of the New South Wales State Government. There are 7.2 kilometres of hollow steel chambers within the arches of the Sydney harbour bridge which crews need to enter to inspect. In order to eliminate the need for people to enter these confined spaces, a Remote Control Inspector (RCI)  was developed by a team of Sydney Harbour Bridge Roads and Maritime Services (RMS) employees to inspect the hollow concrete and steel bridge support beams. The Remote Control Inspector was built on the chassis of a remote control rock-scaling buggy which is designed to drive up very steep and rough terrain. Attached to the chassis is an adventure sport wide-angle video camera to record inspection footage and guide the driving of the RCI via a live video feed across a long-range digital signal. Read more about the RCI here>>

During the Sydney 2000 Olympics in September and October 2000, the bridge was adorned with the Olympic Rings and was included in the Olympic torch's route to the Olympic stadium.

The east-facing side of the bridge has been used several times since as a framework from which to hang static fireworks, especially during the elaborate New Year's Eve displays.

Companies who completed projects relating to the Sydney Harbour Bridge: