Plans for a new $250M Sydney Fish Market to be added to the new Bays Precinct development will be double the size of the current market and include outdoor dining and a rooftop bar to attract international visitors. 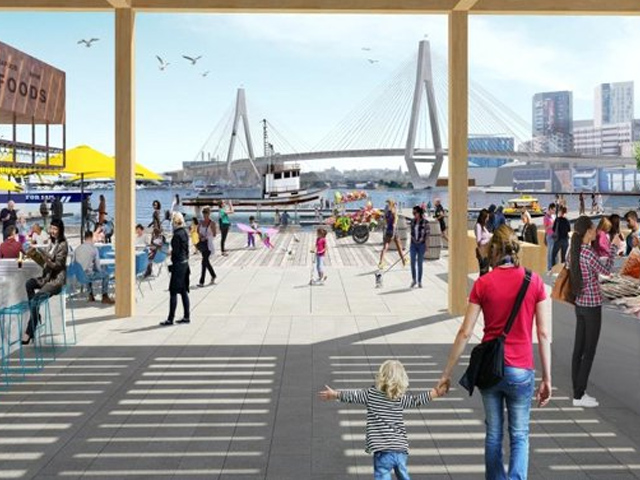 The NSW government is moving ahead with its rejuvenation of The Bays Precinct with plans to build a $250 million Sydney Fish Market.

The new 35,000sqm market will be twice the size of the current property and have 15,500sqm of seafood retail space – compared with the current 6582sqm – and outdoor dining for 3000 patrons as well as a possible rooftop bar.

NSW Premier Mike Baird and Planning Minister Rob Stokes announced the commencement of the process to attract designers for a world class food and dining destination at Blackwattle Bay on Sydney Harbour.

“The proposed redevelopment of Sydney Fish Market is an important milestone in a long list of urban transformation projects currently in the pipeline across UrbanGrowth NSW’s portfolio,” said Chief Executive David Pitchford.

“We’re committed to working closely with Sydney Fish Market and their shareholders in developing our plans for a food and dining destination that local, state and international visitors can be proud of.”

According to The Australian Financial Review, Deloitte Access Economics reported that it was imperative to move the location of the fish market in order to successfully create a new master plan for the tourists who comprise of 20 percent of the three million visitors to the market.

“The original market was a wholesale market with a couple of retail sites, and it was never master-planned when it was set up in the 1970s,” the market’s general manager Bryan Skepper told the AFR.

UrbanGrowth NSW said the new location for the Sydney Fish Market on Bridge Road in Glebe will provide stronger connections between the harbour foreshore and nearby Wentworth Park, and allow for better public access to the new market.

Funding for the new fish market project will be offset by a “mixed-use development on the site of the present fish market and car park”, which will primarily come in the form of residential towers providing nearly 3000 apartments.

Plans for the new fish market have yet to be drafted, but UrbanGrowth NSW are currently calling for expressions of interest to engage with designers and engineers with “extensive experience in delivering creative and innovative projects that are sustainable and sensitive to the surrounding community and environment.”