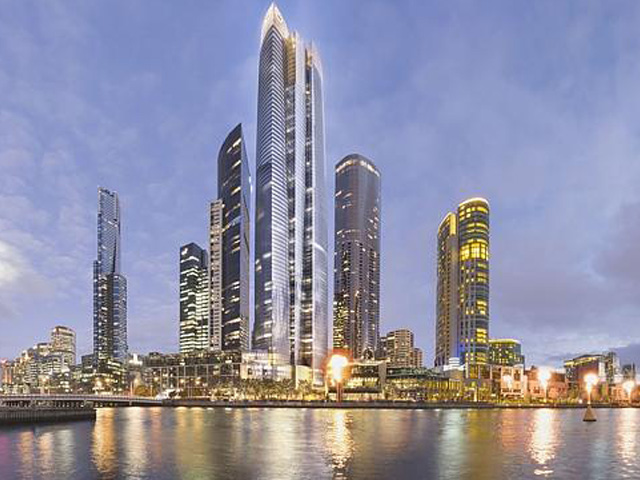 A new 317m tower is the winning design by British firm Wilkinson Eyre to be included in the Crown Resort’s latest hotel proposal for Melbourne’s Southbank. 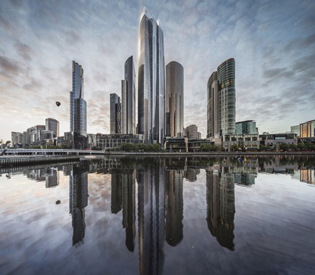 Unanimous in their selection of the Wilkinson Eyre design, the jury chose the ‘Tower of Light’ as the winning entry of the international design competition. The proposed building, slated to be Australia’s third tallest building, will stand only 2m shorter than the Australia 108 residential tower already under construction in the region.  At 325m tall, the Q1 building on the Gold Coast is currently Australia’s tallest building.

The 90-storey Queensbridge Hotel Tower will comprise 388 luxury six-star hotel rooms and 680 apartments.  Also included will be event spaces and restaurants, as well as a ‘Sky Bar’ and garden terrace to be situated at the top of the tower. At a cost of $1.5 billion the tower will provide a plethora of entertainment options for the public, with a forecourt housing retail spaces and amenities for patrons designed to make it a new ‘hot spot’ in the precinct.

Described as “three interlocking sculptural forms providing a graceful and unique addition to the Melbourne skyline”, the Director of Wilkinson Eyre, Paul Baker states they aimed to create an “elegant and timeless building that will become a new, world-class landmark against the Melbourne skyline”.

“All across the world we are seeing cities embrace iconic developments as they vie for their share of international tourists.”

"Wilkinson Eyre have designed a beautiful and elegant building that is destined to be an important addition to the Melbourne skyline,” he said.