LOSE IT OR MOVE IT?


With visions of car-free cities becoming an ever more popular dream for future town planning, could a network of moving walkways be the answer to transporting citizens across the urban sprawl? 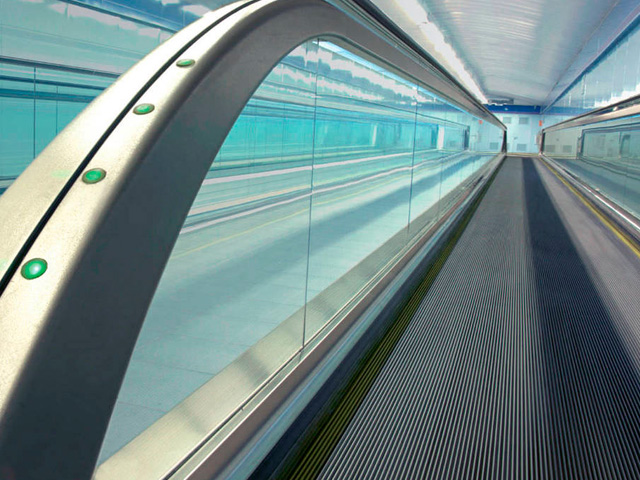 Many urban planners would like to get rid of, or at least minimise, the number of private cars in cities, but what would replace them? Researchers at the École polytechnique fédérale de Lausanne (EPFL) looked at the idea of car-free cities and, using Geneva as a model, they concluded that Jetson-style moving walkways could not only replace the car but could each carry 7000 passengers an hour more energy efficiently than buses.

Though we think of moving walkways or sidewalks as futuristic, they've actually been around since 1893 when the first was installed at the Chicago World's Columbian Exposition, followed by the second at the 1900 Paris Exposition Universelle. Since then they've popped up in the science fiction of H G Wells, Robert Heinlein, and Isaac Asimov, and have been proposed from time to time by urban visionaries as an alternative to conventional cars and public transport.

Despite this, moving walkways haven't really caught on. There are limited systems in the larger airports and exhibition centres, but hardly any are outdoors, and none are used as a large scale system for moving people around.

The EPFL study started with assumptions that are a radical break from the cities of today. In their mathematical model, based on modern Geneva, there are no private cars and all transport outside of the moving walkways is based on buses, metro trains, trams, taxis, bikes, bike- or car-sharing, or urban cable cars.

As to the moving walkways themselves, the researchers looked at several current technologies, but assumed the one used would be based on accelerating moving walkways, where the passengers would be sped up after stepping on until they cruised along at 15km/h, which is the average speed that motorists move at in cities at rush hour. These moving walkways would be networked together, so passengers can step from one slidewalk to another or travel non-stop on elevated expressways.

By studying how people travel daily on primary, secondary, and tertiary roads, the researchers were able to determine how the moving walkways would compete with other mass transit systems, while also considering energy consumption and operational and budgetary constraints. In addition, they took into account the moving walkways' speed, acceleration, length and width, and the intersections and entry and exit points.

What they found was that the most efficient moving walkways configuration for the city of tomorrow has a small ring road around a car-free centre. The network then extends out for a total of 32km on the primary roads on 47 different links equipped with 10 gates. Along with this are 37 intersections linking to moving walkways expressways that use bridges and underpasses to avoid local traffic.

EPFL says that using moving walkways would take up less space than cars since they are only 1.2m wide while roads are 2.5 to 3.5m. This means there would be room for both moving walkways going in both directions and other transport. The capacity of such a system would be 7000 passengers per hour for each walkway compared to 750 to 1800 vehicles on a road.

Moving walkways would also be more energy efficient than buses and, being electric, would have far lower emission levels. Unfortunately, the team concedes the walkways would be very expensive to build and would cost as much as a tramline. However, they expect that costs will go down if a system were built on a large scale.

"We have not come up with a turnkey solution," says Michel Bierlaire, the director of the Transport and Mobility Laboratory. "But this study proves that the concept is credible and that a car-less, pedestrian-centric city is conceivable. This is a useful starting point for urban planners to evaluate the feasibility of accelerating moving walkways."

Lose It or Move It?
Universal Magazines