Experts in uniting plants and architecture, Junglefy have delivered some of the most innovative living infrastructure projects in Australia. 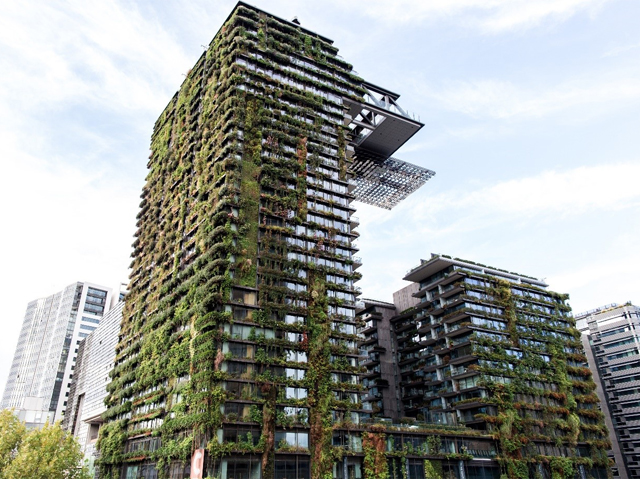 A new type of building is emerging; one that fuses design and nature to create a living masterpiece. Including plants in buildings is simply not enough anymore, these masterpieces go beyond and are part of nature.

Think Atlassian’s new global headquarters, coming soon to Central station with gardens that blur the indoor/outdoor space and in Melbourne, ‘Southbank by Beulah’, with its green spine twisting up the tower façades. Intertwining nature into the fabric of buildings is the future of our cities because we recognise we need nature to be part of our daily lives.

When plants and architecture unite, the best multi-disciplinary expertise must combine and push boundaries to create flourishing, liveable spaces for people and plants. Designing them is one thing; building and maintaining them is something else altogether.

Living architecture, also known as living infrastructure, isn’t new; it’s been an emerging trend over the last decade. Green-walls, roofs and façades are popping up everywhere and what was once niche, is now mainstream. With many of these buildings throughout our cities, bringing these designs to life requires thoughtful planning and consideration. According to leading living infrastructure expert and founder of Junglefy, Jock Gammon, executing living design is “like the strokes on a fine oil painting; the artistry lies in the sum of the skills, not one without the presence of the other.” And if anyone should know, it’s Gammon. Junglefy have delivered some of the most innovative living infrastructure projects in Australia.

Buildings like One Central Park in Sydney, renowned for its plant covered exterior which still appears as verdant seven years after it was completed. At the time of its inception, the enormity of the design seemed beyond the realm of possibility but thanks to the collective knowledge of Junglefy, Aspect-Occulus, Turf Design Studio, Ateliers-Jean Nouvel, PTW Architects, Patrick Blanc, Frasers Property, Sekisui House, WATPAC, ARUP, WSP Lincolne Scott and others, a world-class icon was created which paved the way for the living building designs seen today. 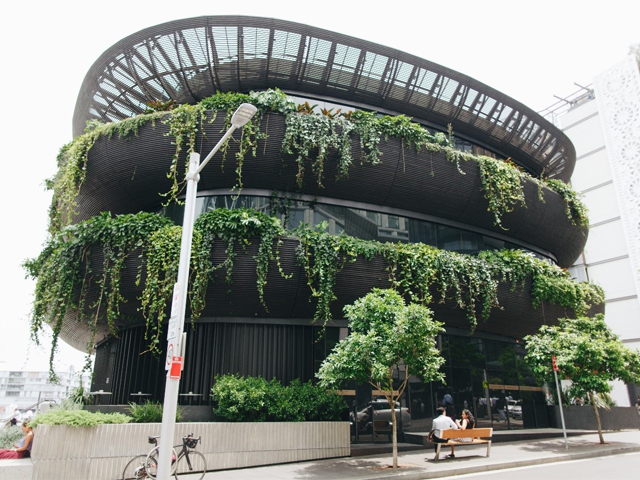 Barangaroo in Sydney is another example where collaboration between some of the finest minds have come together. Here, Junglefy worked with architectural practices including Hassell, Collins and Turner, FJMT, Rogers Stirk Harbour, Tzannes & Associates and PTW, along with landscape architects from Aspect Studio and Oculus.

A stand-out is Barangaroo’s smallest but most unique building, Barangaroo House by Collins and Turner. Extending over three levels, the restaurants and bar take the form of stacked timber bowls with hanging gardens of natives and edible plants, spilling over the edges.

Its award-winning design is a showcase of excellence and innovation with its curved edges commanding bespoke solutions. The charred timber cladding, wrapping the outside of the ‘bowls’ uses a Japanese technique, Shou Sugi Ban, to create the soft smoky look. The planter boxes with cascading plants, required Junglefy to number every planter box before manufacture and ensure the installation followed the precise order to preserve the gentle arc shape.

The plant selection was tailored with the knowledge of the species that would be resilient to wind and salt from its foreshore location. “Junglefy know what plants will perform. If plants don’t perform, the concept is eroded,” says landscape architect Sasha Coles, director of Aspect Studio, who worked closely with Oculus and Junglefy. “Junglefy also understand the importance of getting the soil right, as well as the infrastructure to support this in the long term,” says Coles.

Integral to the collaboration was landscape architect Roger Jasprizza, associate director of Oculus, who worked alongside Aspect Studio and Junglefy at both Barangaroo and One Central Park. “Everything starts with the site and its unique qualities such as solar access and wind, as much as the finer grain of the site,” says Jasprizza, who included a mixture of exotic and native plants at Barangaroo House. “Junglefy has the experience and innate knowledge of what plants will work and in what conditions. And if anything needs to be tested in advance of planting, it is. That experience feeds into our design, as well as the long-term maintenance which is a key consideration,” says Jasprizza. 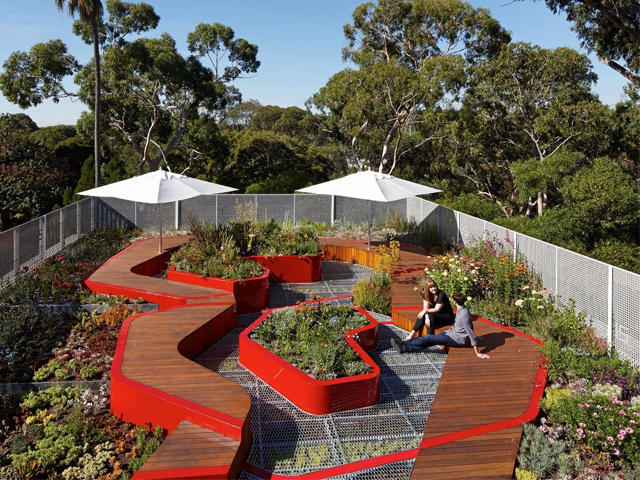 When designing and building a project that includes living elements, the collaboration of expertise across fields is vital to success. Seen in the renovation of the University of Melbourne’s School for Ecosystems and Forest Sciences in Burnley. The 1930s two-storey building, refurbished by Hassell, includes three green roof spaces; one for demonstrating plant species, another dedicated to research, testing water runoff and temperature monitoring. A third section focuses on biodiversity. “The idea was to put this school on the map, both locally, and internationally,” says landscape architect Stephen Tan, senior associate with Hassell in Melbourne.

The green roofs, each with their own purpose and conditions, showed the importance of bringing in the appropriate skillsets. “Junglefy is ambitious in the way it operates, pushing boundaries with research and development,” says Tan. “It (Junglefy) has the ability to solve problems, given it comes from a strong horticultural base,” he adds. As there was inclement weather during construction, Junglefy manufactured many of the components for the rooftop gardens, such as the steel frames and grating, off site. The collaboration between Hassell, the university and Junglefy enabled an ability to quickly adapt to project constraints resulting in a functional, beautiful space and a legacy for learning.

“Collaborating throughout the lifecycle is so important – each team has its own unique skillset and we understand how to bring these skills together to deliver the best result,” says Gammon. 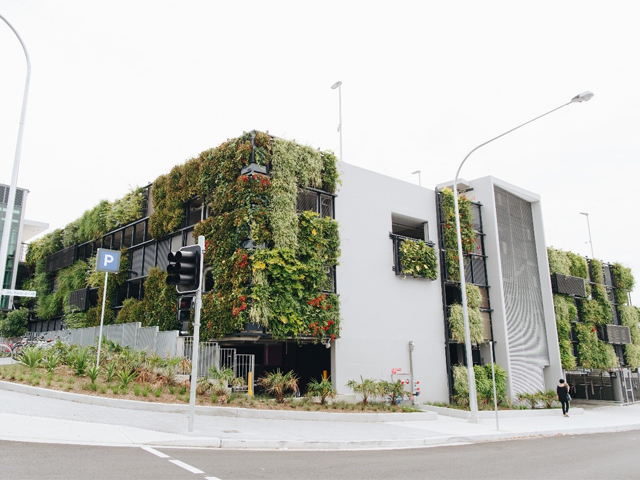 “We have learned so much when it comes to the successful execution of living infrastructure design. The careful selection of plants, the right installation methodologies and product choice, combined with well executed maintenance systems that allow for safe, easy access must all be considered during the design phase. Not understanding these elements can be impossible to resolve post completion and the client may end up with a costly maintenance bill and plants that won’t survive” he said.

One Central Park ignited a spark for creating buildings with less impact and more benefits to people and the environment, and the industry was propelled on a new trajectory.

More than a decade on, Junglefy are turning what was once considered impossible into mainstream. That said they are continually innovating and learning better ways to integrate plants into the design and construction of our cities. In another ten years they imagine our cities to be living within nature, rather than token gestures of nature in our cities. 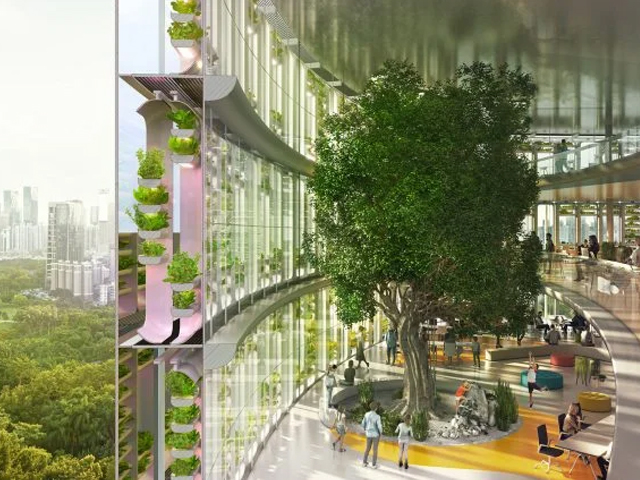