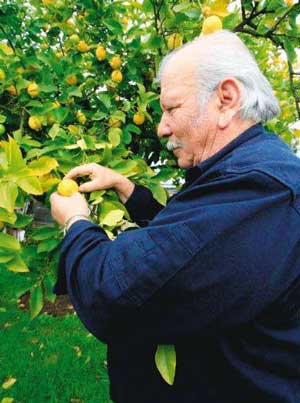 Armed with both the practical and theoretical knowledge, Harry is a gardener to be reckoned with, capable of grafting, propagating, espaliering and, of course, preserving everything from lemons to chestnuts.

Right in front of the “restaurant” is a lemon tree, standing proud in the middle of the garden, that produces hundreds of lemons continuously throughout the year.

He has framed the entire vegie garden with galvanised post and rail so he can cover it whenever bad weather is forecast.

In the vegie patch there was one plant in particular that caught my attention: a grafted eggplant.

At the tender age of 10, Harry Amanatidis arrived to Australia in with his parents, who had taken up the invitation by the Australian government to leave their beloved town of Platania in search of a better future. Harry was just 10 years old.

Platania is a very small town in the province of Kozani, Greece, with a population of 700–800 in earlier times. These days there are only 30-odd residents still living in Platania — mainly older folk — but it’s nice to know the goat population is still thriving with more than 200 hundred goats grazing on the mountain sides. You can be sure that weeds won’t get a foothold anywhere near this little town.

After arriving to Australia, Harry’s father found employment in the sugar cane fields of Queensland, then moved into the wool industry for a short time before spending the rest of his working life on the railways as a storeman. Harry’s mother was a traditional, at-home housewife/mother, always cleaning and cooking something fresh, picked straight out of the garden.

Harry met his wife Anastasia through a proxy, which was a common practice in those days, receiving a black-and-white photo of his lifelong partner-to-be before taking her hand in marriage. The couple had three children, Vassiliki, Foti and Sophia, all now married with children of their own. There is never a dull moment during the celebratory gatherings at Harry’s house with more than 16 extended family members. “I expect these numbers to still grow,” says Harry in a confident voice.

Having returned three times to his home town Platania, Harry has pronounced Greece perfect. “It’s beautiful now. Back then, we didn’t even have roads, we had donkeys not cars, and for lighting we used candles because there was no electricity.

Growing up in Australia, Harry’s first job was selling newspapers in the streets of Adelaide, earning two shillings and five pennies a week, roughly 25 cents, but equivalent to $200 in today’s money — an extraordinary amount for any young fellow to be earning. And he didn’t waste any, either. Harry saved his pennies so he could invest in his manufacturing business, producing rotisseries, hotplates and deep fryers for restaurants.

Buying, refurbishing and selling restaurants was another passion of Harry’s, though it wasn’t a long-term proposition. He then went on to open his own water boring business, running around the streets of Adelaide where he once sold newspapers, except now he was now boring for water so everyone could have an endless supply to use in their gardens.

But you couldn’t have your own water boring business without a bore in your own backyard and for Harry two bores are better than one. “It’s just beautiful when mixed with the rainwater we collect in our water tanks. The plants love it and we will never run out of water.

“Initial set-up costs for your own bore can make it seem like an expensive exercise, but so is losing all your trees and plants because of water restrictions — plants you’ve spent a lifetime growing.”

Now Harry can water as much or as little as he likes in the garden, whenever he likes.

A tradition — and bad habit — among many Europeans is the hosing-down of the driveway, or any concrete, almost on a daily basis. When I asked Harry whether this was the practice in his household, he was quick to reply.  “Just because there’s an endless supply of water, it doesn’t mean you can wash the concrete whenever you like. What for? It’s going to get dirty again. Hosing the concrete is banned at my house!”

Harry’s passion for gardening was seeded in his younger years when he helped his mum maintain the garden while his father was working the second shift. They carried on the traditional gardening methods Harry’s mother had learnt from her father back in Greece when she was young. Without a healthy income, it was important to make the best of the little they had by collecting seeds, recycling, composting and growing healthy organic food for the family.

Today, that passion is strong in Harry and his wife, who loves her flowering plants in both the house and garden. During my visit, Anastasia whipped up a traditional leek and cheese pita and, for the main, pork and leek stew. Then Harry had to show me his secret cool room — it’s where all the good stuff is kept, he says. There was homemade wine, homemade beer and even homemade moonshine, in Greek called tsipouro. Well, you can guess what happened next ... my planned two-hour visit stretched to four hours.

Harry has always been a very inquisitive character, always wanting to learn better gardening techniques, so even while continuing to practise his mothers methods he also began to read gardening books bought on his visits to Greece.

Armed with both the practical and theoretical knowledge, Harry is a gardener to be reckoned with, capable of grafting, propagating, espaliering and, of course, preserving everything from lemons to chestnuts. But, as with bores, one garden wasn’t enough for Harry, so he decided to buy two adjacent properties in Clarence Park, SA. He and Anastasia live in one and his daughter and her family have the other.

Harry thought it would be a good idea to set up one last restaurant in honour of the good memories of his past profession. So, at the rear of his property, up went the home restaurant/cooking quarters/entertainment area and when everyone has gone home, it’s known as “Dad’s shed”.

Right in front of the “restaurant” is a lemon tree, standing proud in the middle of the garden, that produces hundreds of lemons continuously throughout the year.

Adelaide has a healthy temperate climate, allowing many tropical and even frost-tender plants to grow throughout the colder months. Harry has espaliered apple trees along the driveway, which he learnt from a gardening book, with persimmon, olive and other fruit trees on the opposite side. Between the ever-productive lemon tree and the “restaurant”, there’s very little room for a vegie garden, so that’s where next door comes into play.

Subdividing the rear of the next-door property, Harry has made room for a huge vegie garden surrounded by storage sheds and chook pens. He has framed the entire garden with galvanised post and rail so he can cover it whenever bad weather is forecast, which, fortunately, hasn’t all been that often.

In the vegie patch there was one plant in particular that caught my attention: a grafted eggplant. In Victoria, that would normally be grown as an annual, but eggplants are actually perennial shrubs producing wonderful glossy black fruit; because of the wonderful SA climate, Harry has been able to grow his eggplant for over four years without replacing it.

The eggplant is grafted to a Solanum species rootstock, commonly known as devil plant because of the hooked spines along its stem, branches and leaf veins. Anyone who knows this plant knows exactly what a devil of a plant it is to work with.

People in the southern parts of Australia who love their eggplants know they can take up to six months to begin fruiting, so the biggest problem with growing eggplants down south is the warmer season isn’t long enough for the eggplant to set and mature its fruit. Luckily for Harry, it’s not the case here because, not only is it the perfect climate for eggplants, but as his is grafted onto a devil plant rootstock, it guarantees him hundreds of fruit, which are now growing on a plant that has become a tree.

Harry’s talent for working with wood doesn’t stop at grafting living plants. With a workshop that’s jam-packed with every kind of tool you could possibly need, his wood-carving work is totally amazing, too — detailed and precise. “Every tool you see in there I bought because I needed to use it for something; maybe only once, but I needed it.”

The wood-carving tools he is so proud of cost an arm and a leg but they’ve paid for themselves tenfold. Harry has crafted everything from tables, chairs and picture frames to cupboard door insets and even complete furniture — and the quality of workmanship is as good as, if not better than, some of the world’s best.

There’s one bit of living wood that’s safe from Harry’s carving tools, though, and that’s the incredibly productive lemon tree that is the centrepiece of the backyard.

Find out more about caring for citrus trees, pruning lemon trees and much more on Complete Home. 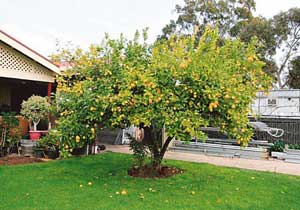 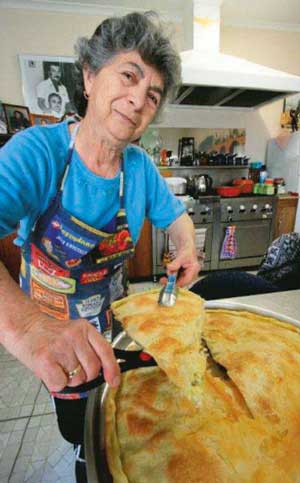 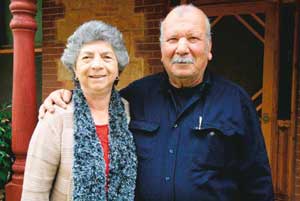