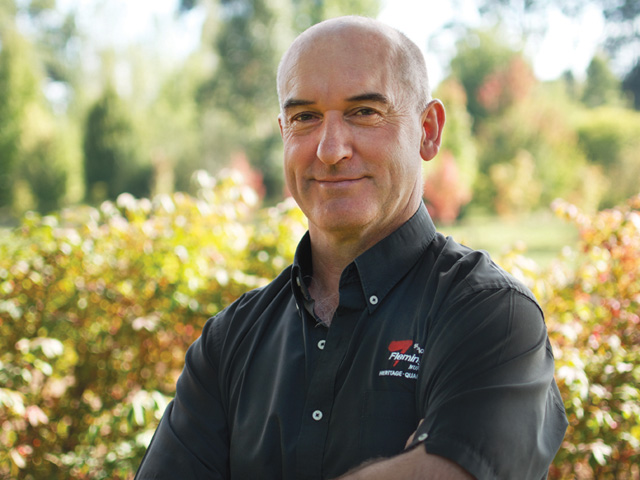 A third generation nurseryman, Wes Fleming was ‘born and bred’ growing trees. The family business, Fleming’s Nurseries, was established in 1918 and is now Australia’s leading grower and wholesaler of deciduous fruiting and ornamental trees and shrubs to retail garden centres, urban development, landscapers and local government.

In 2004, Wes’s vision to place the horticulture industry on the world stage was realised when Fleming’s Nurseries exhibited the first ever Australian show garden at the prestigious Chelsea Flower Show in London. Fleming’s chose Jim Fogarty to design the garden, called ‘Australian Inspiration’, which was awarded a silver gilt medal.

In 2013, some 10 years and nine show gardens later, in what was to be Wes’s final Chelsea Flower Show endeavour, the Trailfinders Australian Garden team took out top honour and international accolades with a seemingly impossible ‘Best in Show’ win – representing the first time in the show’s 100 year history the judges had unanimously decided on the winner.

Now, having earned a widespread reputation for both quality and innovation in horticulture and as a vocal campaigner for better thought-out parks, gardens and a more intelligent response to urban design, Wes finds himself in a position to give something back to the industry.

He is actively involved in lobbying Government across all three levels to not only improve access to parks and gardens but to raise the bar for amenity and functionality, so that Australians can reap the health and social benefits for years to come.

Wes and his team are currently conducting a study into the social and behavioural benefits that greener environments have on children in Kindergarten play spaces, with a pilot program already indicating staggering early results.

Wes is also working in collaboration with leading research teams and progressive council municipalities to measure the health and social benefits of delivering more green spaces into areas of low socio economic backgrounds.

Wes is a regular guest on various radio gardening programs across the country and is often found on various media shows including the Garden Guru’s, Better Homes and Gardens, and The Circle among others.