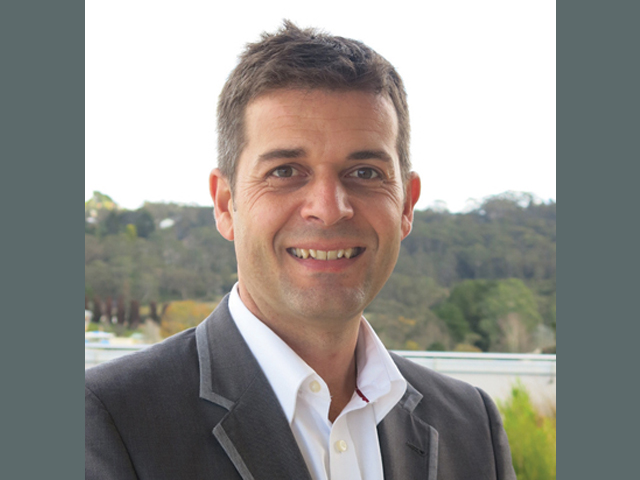 Paul Brinkman has been the Director of Blue Mountains Cultural Centre (BMCC) since its inception in 2011. Originally from a background in digital art, as a visual arts teacher, a few years ago Paul moved in to Arts and Entertainment Management before settling in to the Arts Administration role within BMCC.

BMCC is one of the largest regional galleries in NSW. Located in Katoomba, BMCC is publicly owned and managed. It operates as the Blue Mountains City Art Gallery and the World Heritage Exhibition – responsible for exhibition of and education in the unique and culturally rich environment of the Blue Mountains.

One of the most recent public arts projects that BMCC has been involved with is the Street Art Walk (SAW) by Street Art Murals Australia (SAMA). SAW is located in Beverly St, Katoomba. This colourful outdoor gallery features a series of aerosol art murals by local, interstate and international spray artists.

Tell us about the Street Art Walk project?  How did BMCC get involved?

SAW was a partnership between a group called Mountain Youth Services Team (MYST) and Street Art Murals Australia (SAMA). Jarrod Wheatly is the head of SAMA and he came and spoke to me about his idea of doing a major mural space in Katoomba. The benefit was that there were a number of the owners of the buildings who were very conducive to the idea of setting up the Street Art Walk, so that support is what really made it happen.

My part in that, as the Director of the BMCC and working for local government, was in helping to get the development applications through local government, to get all the approvals that are needed to spray work on public spaces.

What was the idea behind the proposal for Street Art Walk (SAW)?

The idea was to gain some acknowledgement around street art as a different level of outdoor artwork to what people associate with aerosol art – I mean, this work when you see it, it’s amazing. It has made a huge difference to the attraction of the area. What was once a dark and uninviting space is now drawing in a lot of families during the day. All of the things we were hoping for have actually come about with this project. We even have a 5-star Trip Advisor rating!

Our next challenge is to get people to appreciate that it’s not a static space.

What is the next step for this project? How will it continue?

We’ve got new artists already booked in for spring. We’ve got a guy from Victoria, a very highly regarded painter, who’s going to be coming up and doing another wall.

I’d say the murals that we’ve commissioning from the really top artists will stay there for many years, but there are other walls that will be recycled on a regular basis.

As it’s a public space, there’s a curative process about it. It’s not a piecemeal kind of thing. There is an inspection panel involved in the process. When an artist is selected or approaches us to paint on walls, that goes to the selection committee and we make the call on whether we’re actually going to engage the artist to do a wall, and what wall will be offered. It is a curated space.

What part did the community play in this project?

Crowdfunding played a big role in getting the project off the ground. We got it out there on a lot of networks and a lot of people signed up and contributed. But I think one of the benefits of the project is that while we went through all the checks and balances, with the DA application and the legal requirements, there wasn’t a great deal of publicity until it actually started happening.

We had all of the walls being sprayed at the same time on one day, and that all happened at a festival we have up here called The Winter Magic Festival, so we coincided the launch of SAW with that.

We had 8 or 9 cherry pickers down this laneway with a bunch of artists all painting at the same time, and the community suddenly became engaged when they saw it happening in that festival atmosphere.

How has the community responded to SAW as a public art project?

We’re lucky, the Blue Mountains has a very artistically minded community and there’s a large alternative community up here too, but that said, there’s also a large community on the polar opposite end of the spectrum, thankfully overall we’ve really had a fantastic response – the community’s really got behind it. There’s been nothing but positive comments on social media, and there’s a lot of support for the next murals to go up.

What purpose do you feel art serves in public spaces?  What can it do for people and places?

I think art makes places liveable places and expresses the creativity that is bound to those places, giving an identity to the space. It also encourages new residents. One of the arguments that I always use is that people want to live in places where they can engage with art, both paid art experiences and free art experiences.

But, it’s more about the quality. I think you can go to a lot of places around Australia and find public art that is quite dilapidated, or it wasn’t properly thought through, and so it can be very counterproductive.

People use it as a meeting place, so it serves a practical purpose, and it serves a role in promoting a space as a tourist destination too. Rolling out more things for people to see and do adds incentive for people to put something back financially into a community.

What is Blue Mountains Council doing with regard to art in their public spaces?

Blue Mountains City Council is getting right on to this at the moment. After many decades of not really engaging with the public art that exists, we’ve now got a panel together that is assessing all the public art in the Blue Mountains and working out what needs money spent on it to get it back up to scratch and promote, or what do we need to write off and take out of the public domain. I think that’s a really important step for a local government to put some thought into.

What is the selection process regarding art that goes into public spaces in the Blue Mountains?

We have a committee that meets and we have a public art policy that the committee refers to. But really the crux of it is making sure that the decisions made on public art are long term decisions.

Similarly to when you’re building a public art collection, you need to make a decision based around something you’re going to be keeping for the foreseeable future, and how is it going to be maintained.

I think the idea of involving the community in public art projects, through things like crowdfunding, provides a sense of personal investment in public spaces. What do you think can come out of that?

In the Blue Mountains in particular it’s quite fascinating that a lot of people that own property up here own it as a holiday home. They live and work down in Sydney and come up for the weekends, but they want to slowly swap that percentage around. They want to have a sense of place, a sense of the community, and one of the ways they can do that is contribute to arts projects or become members of their local arts gallery.

We’re finding that is happening a lot with us (BMCC). We’ve got over 1300 members and many of them are from Sydney, but they spend a lot of time in the Blue Mountains, and the way they feel a part of this community is by contributing to the arts, which is great.

We’re also finding that where some of the money these people may have contributed to say the Art Gallery of NSW, where a significant amount of money would go into a big puddle of money, if they donated the same amount of money to the BMCC it would make a much bigger difference. People are really starting to become cognizant of that, and that’s to everyone’s benefit.