PLP’s new masterplan for China’s Pearl River Delta features a 595m rising tower of an offset design that will work to withstand wind and supports its generous mass. 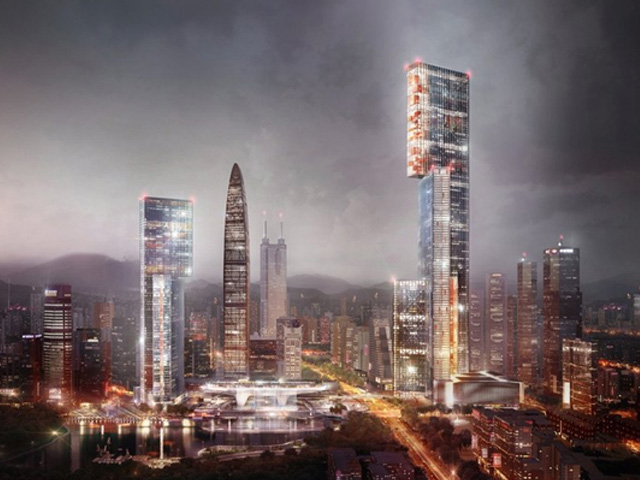 If a masterplan by PLP Architecture comes to fruition, a new metropolitan center in China's Pearl River Delta will feature one of the tallest buildings in the world. The 595m Nexus Building comprises three offset volumes and is the centerpiece of the scheme, which also incorporates a smaller office tower, a performing arts center and a central concourse. 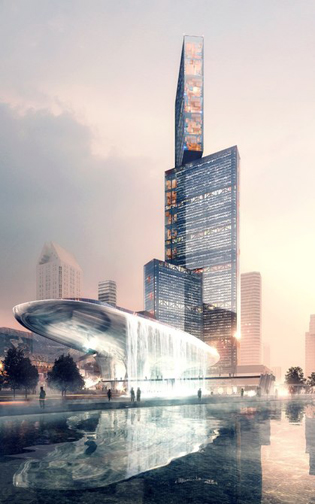 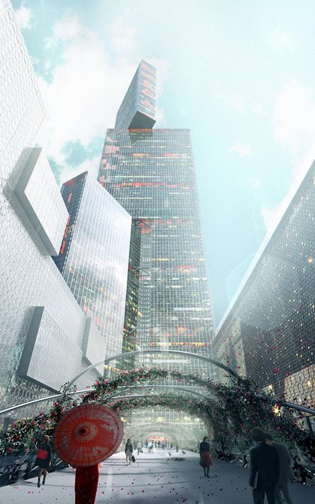 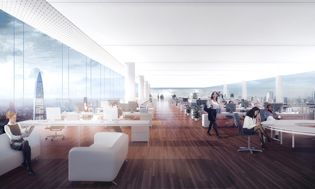 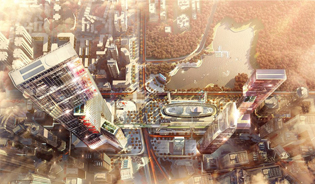 The Pearl River Delta project is unique in that it requires a vision for an entire locality. PLP developed its design after being invited to participate in an international competition for the project.

The Nexus Building is the focal point of PLP's masterplan. While visually striking, PLP says the tripartite configuration would actually make the building's height more feasible. By splitting the building into three volumes as it has done, it says, the building would be better equipped to deal with wind and for the lifting requirements of its huge mass.

The volumes are offset on equidistant axes and are oriented to respond to different contexts. The lowest 44-storey volume faces a nearby park, the 83-storey middle volume is angled to the urban locality, and the 124-story top volume looks out to the city and mountains in the distance. The ‘propeller-like configuration’ also means that four fifths of the building envelope will be shielded or shaded from the low western sun, helping to regulate solar gain.

Although primarily for office use, the Nexus Building will also accommodate an eight-storey retail podium and a 14-storey hotel at the top. Due to its height, the building will employ ‘shuttle lifts’ that run on a frequent schedule rather than on demand.

The smaller Lizhi Park Tower mirrors the vernacular of the Nexus Building, with two interlocking volumes. The lower volume is angled to provide better views of the tower from the nearby park, while the upper volume is said to form a cantilever that ‘looks’ towards the middle of the site.

Making up the performing arts complex is a 1700-seat theater, a music hall, a multi-purpose performance space and a multiplex. The Platform for Contemporary Arts is so-called due to the building's raised and flattened topography, from which water will cascade as a visual feature and in an effort to conceptually link the built and the natural environments. A main elevated bridge suspended 7m above street level and a series of ancillary bridges, collectively known as the Concourse, will link the three buildings.

No details have been released as yet regarding when or if this project will proceed.