HOW TO BUILD A GABION WALL


Permathene provides kit-form gabion cages in a variety of sizes. Find out how easy it is to build your own gabion wall with garden writer Catherine Stewart. 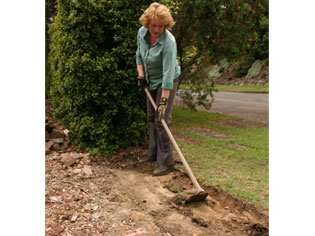 I’ve always loved the look of gabion walls – the subtle variation in stone colour, the texture of different rock fillings and the light and shade of stone and crevice. They’ve been around for a while in road building and industrial landscapes, but when I went to try and find out how to build a small one for myself, I found information was pretty sketchy. I didn’t want to build a retaining wall, just a small free-standing gravity gabion wall about 1m high. 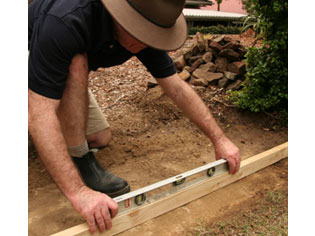 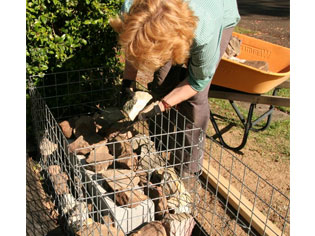 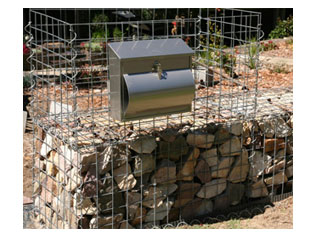 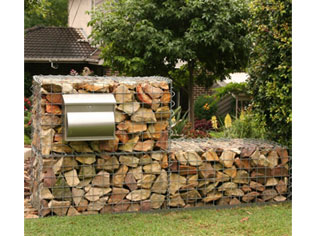 It all started with the letterbox. We’ve had bad luck with letterboxes. The lovely wooden house-style one made by my dear old dad was kicked apart some years ago by drunken football fans, and the repaired version was stolen. We ended up with a small metal letterbox sitting on some concrete blocks for a couple of years while we landscaped the front garden. Serviceable but pretty embarrassing! I decided I wanted something really, really solid, so a wall-style box fitted to gabion wall at postie-preferred height became my plan.

First we had to find how to make a galvanised mesh cage to holds the rocks. Luckily, in Sydney we found Permathene P/L, which makes kit form gabion cages in a variety of sizes. Their gabion cage mesh is coated with Galfan (aluminium 5%, zinc 95%), a longer-lasting material than plain galvanising, and the aluminium in the coating will weather to a lovely grey patina. We chose a stepped design that used a 2m x .5m x .5m base layer, topped with a 1m x .5m x .5m second tier. Total cost – $200.

We used a hoe to level the pad area on the front boundary. The ‘soil’ here, if you could call it that, is close to the consistency of concrete so we were able to put our gabion wall on what’s there. If you have slippery clay soil, you will need to replace about 150mm depth with a compacted gravel or road base layer to make a stronger support, or otherwise the soil might slump under the weight. Then we used a level on a long straight-edge to check the pad was level in both directions.

Keeping out the grass

As our gabion wall sits along our front boundary, I wanted to make sure that the couch grass on the nature strip couldn’t get up into the wall, from where it would be impossible to remove. I’ve seen a couple of sad-looking gabions where that’s happened. We used some powder-coated, corrugated 100mm edging we bought in a roll from Bunnings Hardware. The soil was so tough that we had to use an Ozito demolition hammer to cut a trench for the edging. We spread weed mat over the pad and tucked it down tightly behind the edging, using a length of in-ground treated pine to push it straight.

We started by laying the mesh sheets out flat with the base surrounded by the four sides. Our cages are held together with a spiral of gal steel that you wind through the adjacent edges of the mesh panels. It’s easy to do as the spiral exactly matches the mesh grid. When it reached the end, we used pliers/multigrips to pinch each end of the spiral so it can’t slip out. Our 2 metre long lower cage has a middle cross panel to stop it bulging out, which we wired in along its bottom edge when the cage was open on the flat, and then down each vertical side when we had the cage in place. The cages have bracing ties across each corner about half way up which we positioned and pinched closed.

We have a lot of on-site sandstone which we broke up into smaller pieces with the Ozito demolition hammer. Filling with onsite materials also means the gabion wall fits really well into its surrounding landscape. Each piece has to be about 150-200mm in 2 dimensions and 100mm thick. Tony worked out a clever system using the diameter of old plastic pots – if it went through the 200mm width but not through the 100mm, it was the right size. After calculating we wouldn’t have enough broken rock, we decided to re-use some leftover concrete blocks and old bricks for bulk in the centre of each cage.

Packing the rocks takes some time. The sandstone varies in colour through white, yellow, pink and brown and I wanted to mix up those colours. I also looked through the broken rocks to pick out those with a flatter face so I could put them on the presentation street side. Corners are trickier, and we learned to put aside pieces with a natural right-angled corner so they’d fit nicely in both dimensions.

We worked in layers, using rejected smaller pieces to fill up any voids and to wedge the best rocks against the face of the cage, tessellating them as closely as possible, and then filling in behind them to hold them in place.

Once we’d packed (and then repacked in a few spots) the lower cage, we wired on its lid and then assembled the second layer on top. Before we packed the second layer, we attached our new brushed steel letterbox in place using two timber backing pieces. We filled the second layer like the first, using some old bricks and blocks in the centre. I found I needed to get down low to check that I’d tessellated the pieces carefully enough that you couldn’t look through to the central blocks, and I made sure to leave some really good looking pieces for the top layer. I’ve seen gabions that are personalised with found, or site objects, (like those in Ballast Point Park) but Tony thought that idea was a bit kitsch. However, when we’d finished, I realised I’d lost an earring, so it’s in there for keeps now!

With the second lid wired on (after a fair bit of my fussing about and repacking some sub-standard areas), we were finished. We’ve had many people stop as they walk by and admire it since. And I’d like to see some ratbag try and kick this letterbox over.

How to build a gabion wall
Universal Magazines 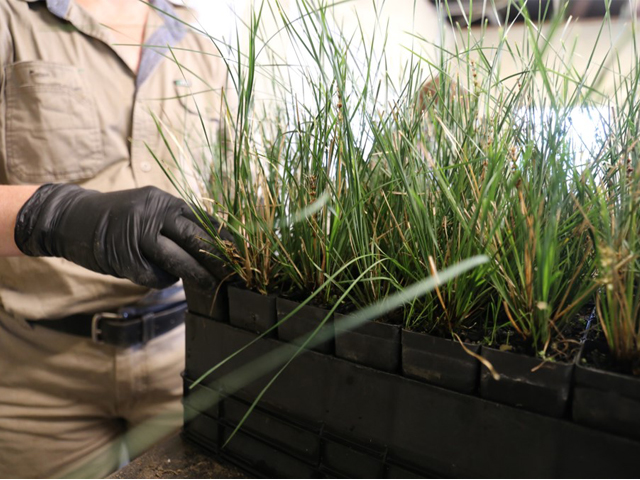 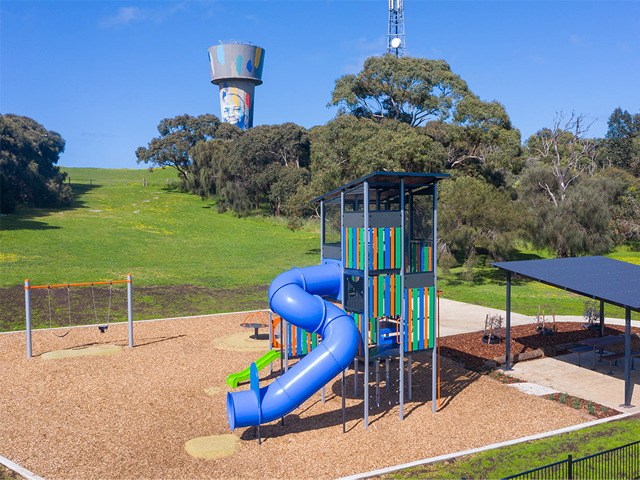 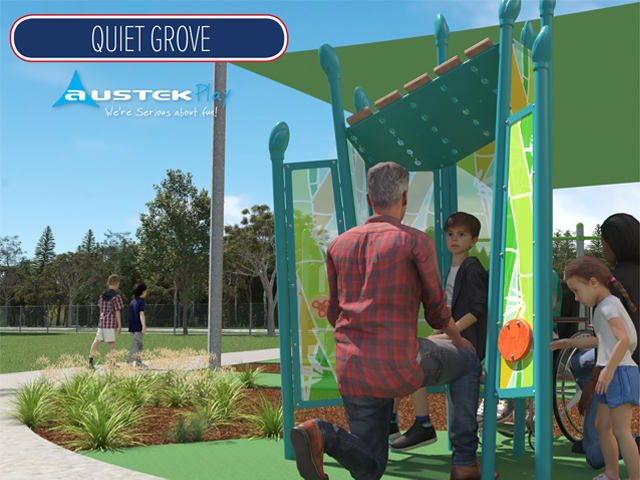 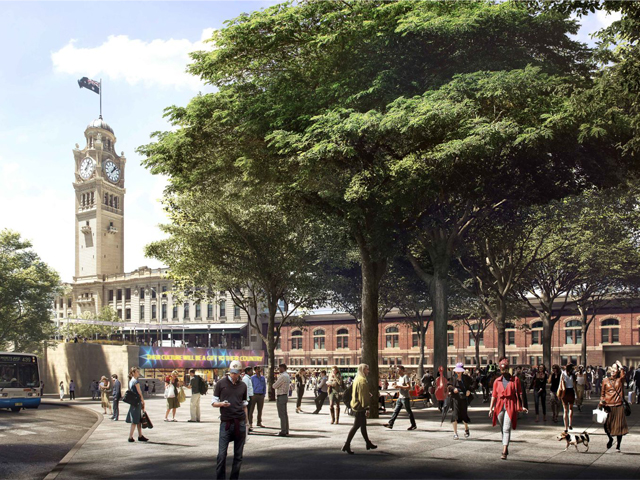 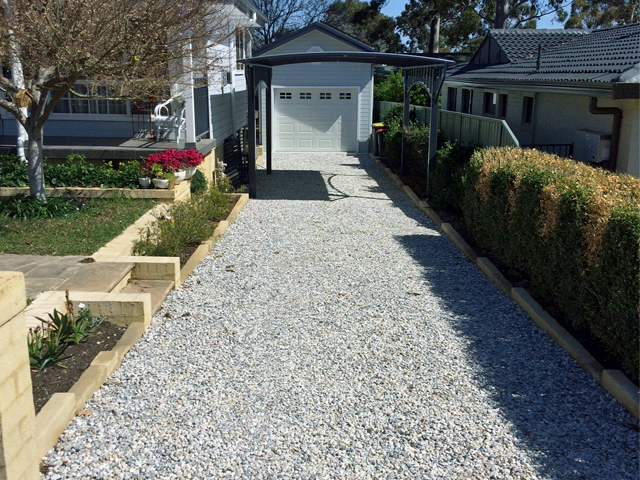