An unused block of land in Green Square, one of Sydney’s fastest growing areas, is to be transformed into a new community square, complete with a water play park, landscaped terraces, garden rooms and café. 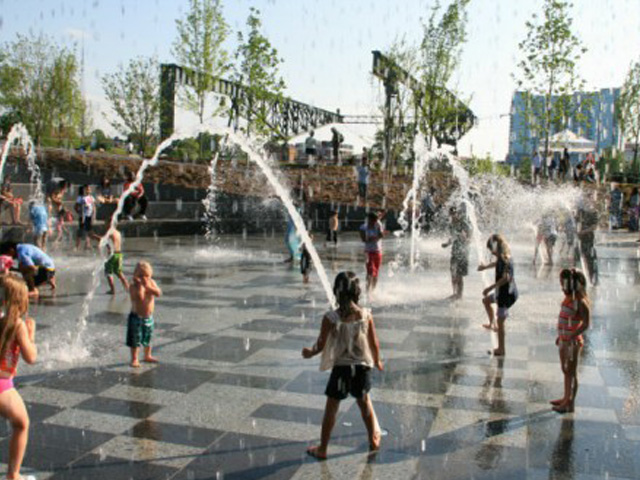 An unused block of land in Green Square, one of Sydney’s fastest growing areas, is to be transformed into a new community square, complete with a water play park, landscaped terraces, garden rooms and café. The City of Sydney commissioned Oculus to design Dyuralya Square, which will be a 2000 sqm recreational space in the heart of the Lachlan Precinct at Waterloo.

Lord Mayor Clover Moore said the $3 million facility will be a sanctuary for the local neighbourhood and also support local businesses by attracting visitors.

“The Green Square area is one of the fastest growing residential areas in NSW and this is a rare opportunity to take unused land and turn it into a world-class urban square and recreational space,” the Lord Mayor said.

“It will be an ideal space for people to socialise, with tables and chairs for chess, a café with outdoor seating and a water feature and play area overlooked by sitting terraces.

“Small garden rooms around the edge of the square will offer tranquil spaces to sit, while shady trees and gardens filled with native plants will add variety and colour. The large urban lawn will be perfect for picnics and relaxing overlooking the square.

“These outdoor spaces will be enjoyed by residents and visitors, young and old, all year round. They will also boost the surrounding shops and cafes, while offering opportunities for future business growth.”

Located on the proposed transit corridor of Gadigal Avenue, Dyuralya Square will be linked by shared pathways and cycleways for safe and easy access to nearby shops in Archibald Avenue and open space in Wulaba Park. The square will provide easy access to buses and a proposed light rail stop.

The area was once dominated by freshwater swamps and creeks and was a valuable hunting ground for the local Gadigal people. Dyuralya Square takes its name from the Gadigal word for the brolga, a species of crane that once thrived here in the wetlands.

The area was later used as Chinese market gardens and a nursery, with Victorian terraces to the east. The nearby Waterloo Swamp was drained and warehouses and factories dominated the area in the early 20th century.

Bordered by Amelia, Murray and Bruce streets, the site was purchased by the City in 2010 and was included as proposed open space in the Development Control Plan in 2012.

“The precinct’s industrial past will be reflected in the recycled brick and granite gravel used in the square’s construction, while new public artwork will capture the area’s rich history,” the Lord Mayor added.

“Following positive community consultation and feedback on the concept design, construction work is expected to begin in 2016, with the square completed in 2017.”

Around $8 billion is being spent on apartments and community facilities for the 54,000 people who are expected to live in the Green Square area by 2030.

The City has committed $440 million over the next 10 years to deliver quality infrastructure and community facilities in the area. These include a new library, plaza and aquatic centre, as well as parks, public art and a community creative hub.