A building that is completely or partially covered with vegetation is said to have a “green roof” or “living roof”.

A building that is completely or partially covered with vegetation is said to have a “green roof” or “living roof”. Green Roofs are typically planted over a waterproof membrane, which often include a root barrier, drainage system and irrigation. Green roofs have a long history dating back to Viking sod roofs, but modern green roofs usually comprise of manufactured layers that support growing medium and vegetation.

A green roof is build serves many purposes, usually with an environmental benefit:

Extensive green Roofs are purpose built, and demonstrate a thicker substrate that can support a wide variety of vegetation. Traditional roof gardens are considered intensive green roofs – they might look like park gardens or contain herbs and edible household plants.

Urban use of Green Roofs

Much of the research in to green roofs has been generated from Germany or the USA in the last 20 years.

In the USA green roofs are encouraged and can be seen in Atlanta, Portland, and Chicago. The Chicago City Hall boasts a green roof, and the city has passed building codes that incentivise developers on private green roof construction.

In Australia the Committee for Melbourne has been the most progressive with its “The Blueprint to Green Roof Melbourne”.

Examples of green roof construction in Australia include:

• Freshwater Place, Melbourne – A residential tower with green roof completed in 2002.
• CH2 Melbourne City Council Building – The first 6 star design commercial office building build in Australia, completed with green roof in 2006.
• Condor Tower – Which boasts a 75 metre square green roof lawn on the 4th floor, 2005.
• The Parliament House of Australia, Canberra.
• The Victorian Desalination Project is planned to have a green roof of over 90,000 indigenous native plants on an area of 26,000 square metres. (This green roof will be installed by Fytogreen Australia).
• Central Park, in Sydney’s Broadway is planned to have a cascading green roof and walls.

Other notable green roof projects include the School of Art & Design, Singapore, Fukoka, Japan, and the Vancouver Convention Centre, Canada.

As the name implies a green wall is a wall that is completely covered with vegetation, growing in a soil or other organic medium. Green walls are sometimes known as “Vertical Gardens”, “Living Walls”, “Bio Walls” or “Vertical Vegetated Complex Walls”. Green Walls have become increasingly popular as urban cities strive to achieve higher environmental standards.

Green walls can be seen in:

A green wall facade is where a plant grows directly up a wall or manufactured structure, but is rooted in the ground.

This is where the plants are actually planted in the wall in a manufactured matrix that holds soil or some other growing medium, along with irrigation and drainage structures. Green wall panels are made of plastic or stainless steel, and will often include geotextiles to keep the growing medium in place.

The growing medium used in green walls is usually a custom-prepared for the situation as either loose, mat or structural media.

Often loose soil mediums are packed in to a shelf or a bag which is installed on a shelf to makeup the wall. Loose media systems often require replacing every two years or so, and are often used by home gardeners.

Matted systems are often thin and rely upon a material like coir fibre to hold the growing medium and plants in place. These are effective because sections do not have to be replaced as frequently but they do not support large plants, and require special irrigation arrangements.

Structural media consists of blocks that can be manufactured to a variety of sizes. These media do not break down for 10 to 15 years and are used in many commercial green roof applications over 8 metres high.

Sometimes a green wall is situated near the air return of a large building to help improve air quality. The air is often pulled or forced through the plants leaves. At this stage research suggests that standard air filtration equipment must still be used, but work is being done to develop a green wall system that removes the need for this altogether.

Green Roofs Australasia is for Green Walls Too

The French Botanist Patrick Blanc is often referred to as the creator of green walls for urban design situations.

His first experiment in the construction of green walls was made at the Museum of Science and Industry in Paris in 1988. With a Botanical Background and career at the French National Centre for Scientific Research Patrick Blanc has managed to combine science and art in his creation of green walls or “vertical gardens”. Patrick Blanc Green Walls can now be found in significant public spaces around the world.

Patrick Blanc pioneered a system for green walls that uses a durable metal frame, with PVC, and non-biodegradable felt as the basis for plants, which are served by irrigation systems. The felt has high capillarity and allows for a homogenous distribution of the water to the plant roots. Patrick Blanc green walls are soil-free, and seem to thrive, even indoors with artificial lighting. His systems for green walls all use non-biodegradable artificial materials, which make them durable after biology moves in. Nutrient enriched water is provided from the top via an automated system. The weight of green walls created in this way is less than 30Kg per metre square, making it a versatile form.

Mr Blanc studied plants at the Pierre & Marie Curie University in Paris, and went on to travel in Thailand and Malaysia in the 1970’s to study how plants grow on rocks or adapt to extreme situations. – real life green walls. Having observed how plants grow year-round on tropical or temperate forests on rocks and tree-trunks he sees soil as mere structure, and the nutrient-carrying water as the essential life-giving element. He cites the supporting fact that 2,500 of the 8,000 known species of Malaysia are growing without soil.

Once built Patrick Blanc green walls create their own climate, even in air-conditioned environments. Plants are selected for the particular location of green walls, often drawing upon tropical species that can live on the understory of a forest with very little light.

Mr Blanc works like a Landscape Architect – considering the aspect and position of the green walls within the context of the overall project, and then looking at architectural elements such as the shapes of leaves as viewed from different vantage points. He makes a percentage of the cost of green walls, and provides supervision services to gardeners and landscape contractors who do the installations. His Public Green Walls are treated like artworks – copyright to the artist, and protected from being reproduced for financial gain or public recognition.

Mr Blanc courts the appearance of an artist, often showing up for public events on green walls with dyed green hair, and manicured green fingernails. He is said to be working on hanging green ceilings, but green walls remain his primary focus and passion. “Humanity is living more and more in cities, and at odds with nature,” says Mr Blanc, “The green wall has a real future for the well-being of people living in cities. The horizontal is finished – it’s for us. But the vertical is still free.”

Other terms applied to the green walls of Patrick Blanc include eco-art, green architecture, and organic wallpaper.

Quick facts on the inventor of Green Walls - Patrick Blanc 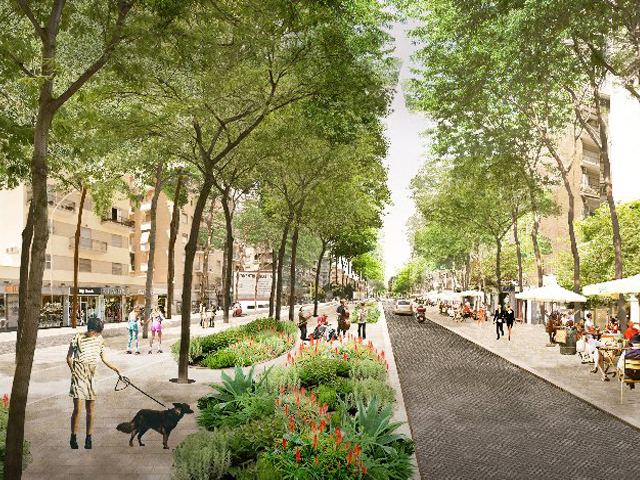