The green roofs in the Victorian Desalination Project are currently the largest installation of extensive green roofing in the Southern Hemisphere. 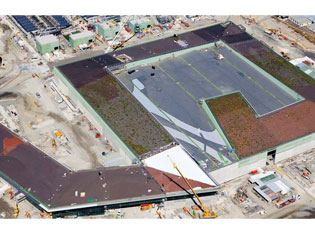 ASPECT Studios has been involved in the Victorian Desalination Project since the bid phase and was instrumental in overseeing the inclusion of extensive green roofs on the main buildings of the process plant.

The green roofs in this project are currently the largest installation of extensive green roofing in the Southern Hemisphere at 26,000 sqm. They demonstrate the integration of landscape with architecture, assist with the mitigation of visual impacts, as well as providing other benefits for the coastal site near Wonthaggi in Southern Gippsland.

Comprised of a thin layer of growing media, as well as drainage and irrigation components, they are planted with locally occurring indigenous species that will provide habitat for many birds and insects, and contribute to the biodiversity values for the area. The green roofs also visually blend in with the surrounding coastal landscape, store and clean rain water, and provide acoustic and thermal insulating properties.

In late April ASPECT Studios will be conducting a tour of the green roofs with a range of industry representatives including ESD managers, architects, developers and government representatives to showcase the drivers and benefits of green roofs.