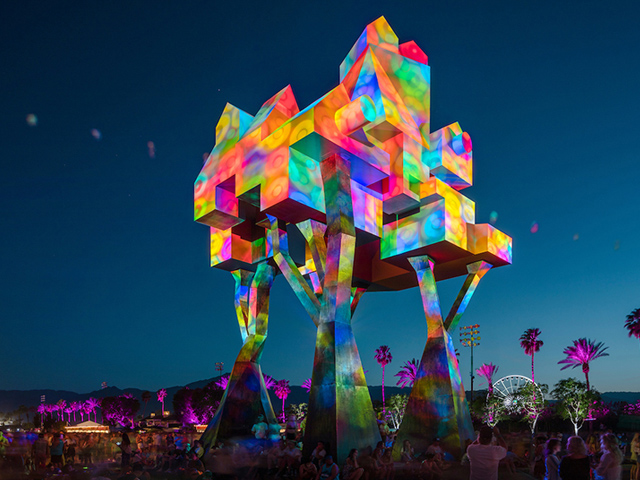 While Coachella might be best known for its music and celebrity performers, the art installations this year have taken on a larger-than-life sized presence. For each edition, the festival commissions an international cast of creatives to conceive original, site-specific works for its vast campgrounds. A mix of established and up-and-coming artists contribute public art pieces to be experienced and enjoyed through an infinite variety of perspectives, and by an ever-changing audience. Among the installations this year is a six-storey fleet of oversized animals, and an ‘immersive ecosystem’ of imaginary plants that spreads over nearly an acre.

UK-based artists Joanne Tatham and Tom O’Sullivan have built one of Coachella’s largest art installations to date. ‘Is This What Brings Things into Focus?’ is a tableau of monumental mammals and strangely shaped animal figures with vibrantly patterned ‘skin’. “I was interested in the idea of a beast-without-identity,” says O’Sullivan, “Almost like a comic fool character, or a kind of everyman or underdog.” Rising up to six storeys, the enormous characters are the festival’s unintentional photobombers. 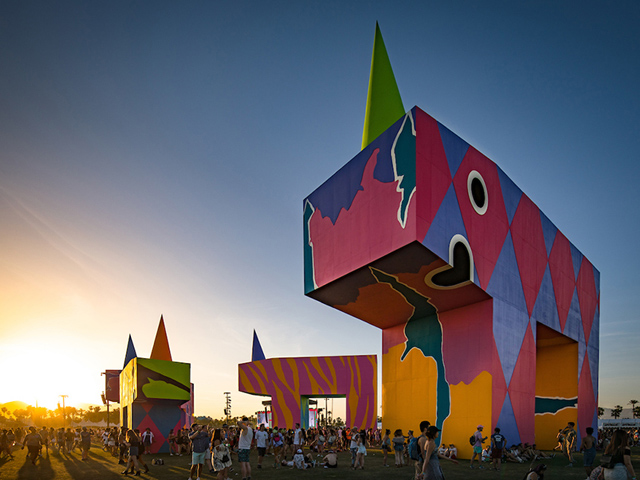 Brooklyn-based artist Olalekan Jeyifous created a ‘community on columns’ that rises high into the sky. The installation explores the ‘relationship of the terrestrial to the sublime,’ the artist explains, ‘like a coming together of people around the music and the arts’. ‘Crown Ether’ is a visual pun on a treehouse, creating an unattainable building above the landscape.

Brooklyn-based studio Chiaozza has realized a nearly acre-spanning landscape of whimsical imaginary plants in a palette of pastel and fluorescent tones. “We want to create a visual bath, something you can explore and get lost in,’ says Adam Frezza of Chiaozza. For ‘Chiaozza Garden’, more than thirty sculptural species sprout around the campgrounds, each built by hand and covered in coloured stucco. “The driving element in our practice is to create curious and optimistic works that encourage a sense of joy,” Frezza describes. 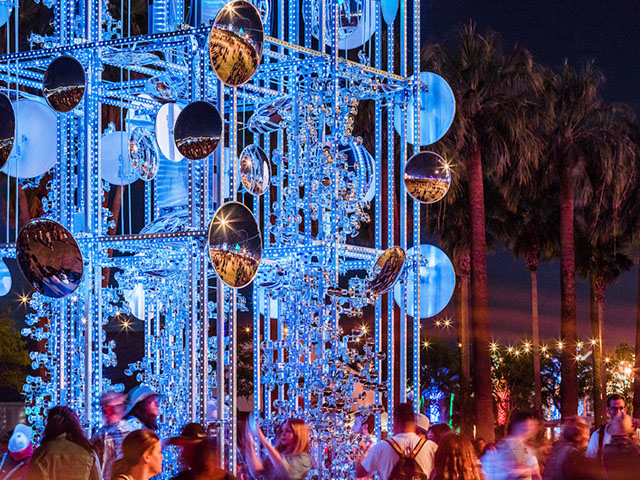 Brazilian artist Gustavo Prado references themes of migration with his reflective installation ‘Lamp Beside the Golden Door’. Prado arranged a mass of rounded mirrors at various angles to create a tower that catches fragments of light as the day progresses. "It is a way to empirically present how the mind turns the continuous interconnectedness of phenomena into separate beings,” Prado says. The installation takes its title from the last line of Emma Lazarus’ poem inscribed on the Statue of Liberty. 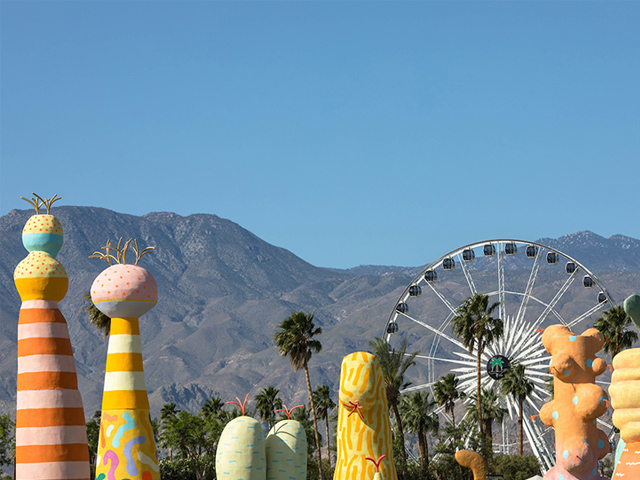 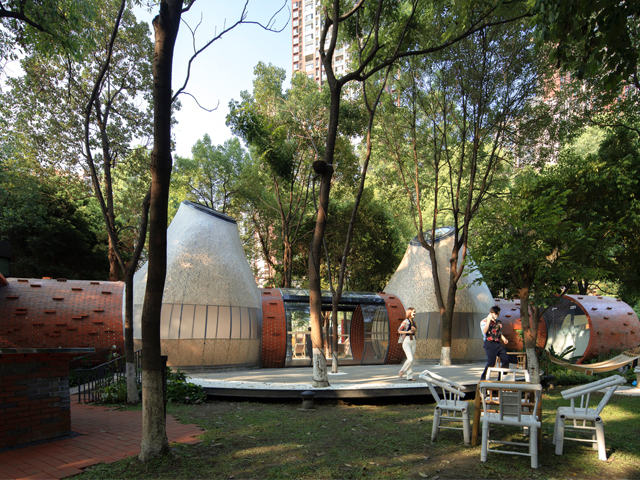 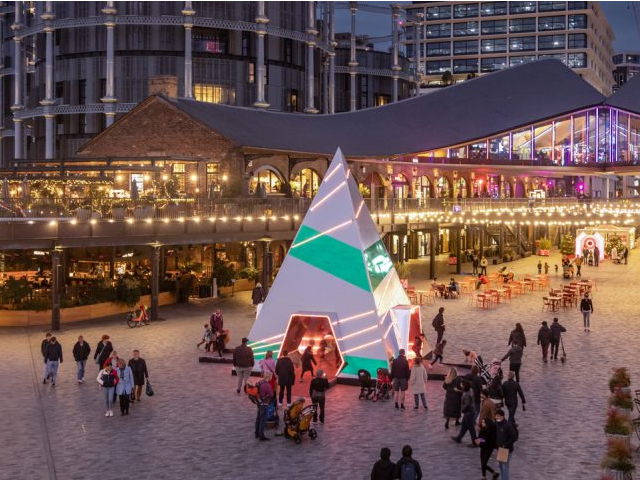 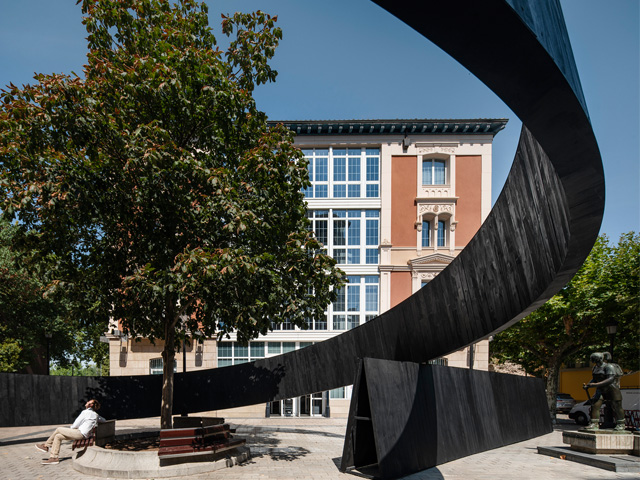 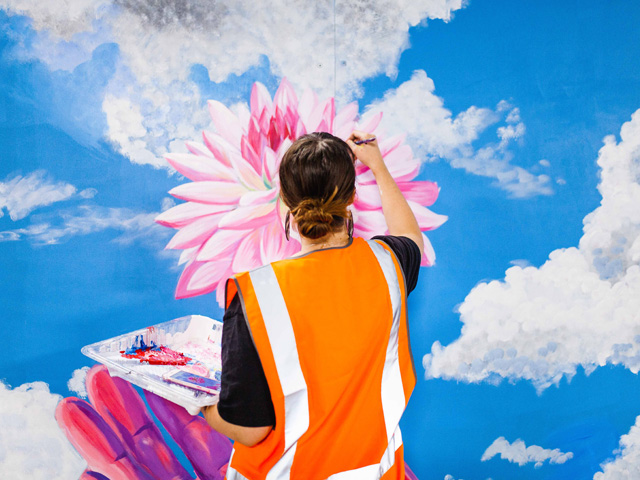