FROM PAPERMILL TO PUBLIC HUB


Snøhetta has released redevelopment plans for a cultural complex on the site of an abandoned papermill that has locked up views of Oregon’s Willamette Falls, the second largest waterfall by volume in North America, for the past 150 years. 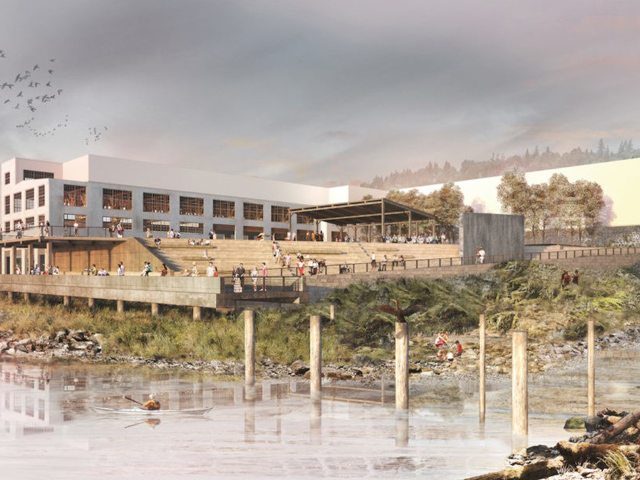 Norwegian firm Snøhetta is once again making waves with their design concept for the former Blue Heron paper mill site in Oregona, USA. The firm has unveiled plans that transform the abandoned industrial site and waterfront into a cultural complex threaded by an elevated pathway.

The plans detail how some of the current industrial buildings from the site will be restored and repurposed while others will be demolished in order to create a series of public spaces, such as a visitor's centre, a public hall, a theatre and a conifer grove.

The demolition of certain sites will allow space for an environmental rehabilitation program that will focus on restoring the historic basalt topography and aid ecological habitat regrowth for local wildlife. 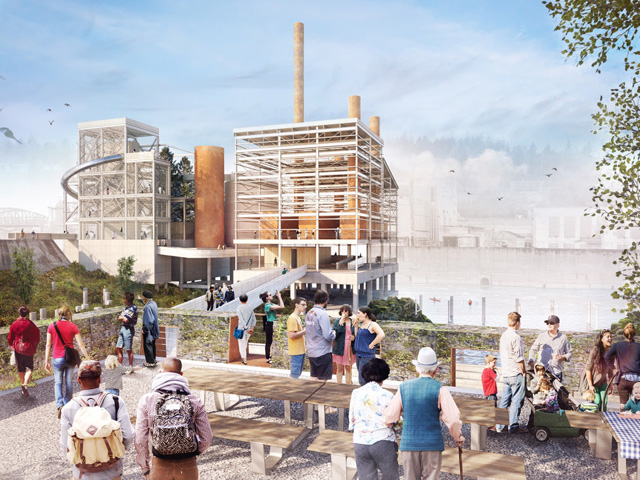 The entire space is connected by the Riverwalk, an elevated trail set on existing structures that will have additional sections added that can withstand flooding and earthquakes. The walk will weave across the 27-acre site, beginning in Oregon City's historic downtown and coming to an end at the crest of the falls. The Riverwalk will incorporate three main lookout points along the way and unlock views of the waterfall and surrounding areas that have not been accessible for up to 150 years.

“The Riverwalk will serve as a portal to the Northwest’s collective history, reviving a former industrial site through its aggregated layers of natural, ecological, cultural, and geological history,” said the architects.

The site as a whole has been divided into four core sections - The North Riverfront and Flour Mill Foundation; The Public Yard and Woollen Mill Alcove; The Mill Reserve and Mill H Overlook; and PGE Dam, The Clarifier, and The Falls Overlook.

The architects, however, believe that the design of the Riverwalk will connect the sections and activate the space as a whole. They said: “The new design treats the whole site as a single landscape, with a network of promenades and lofted pathways that lace through the physical strata of the site, immersing visitors in a tactile experience that celebrates the changing water level, the feeling of the spray on your skin, the dramatic play of light and the roar and presence of the falls.”

The North Riverfront area will see the removal of the existing structures to expose the site's foundation of ancient basalt. Leading around from this exposed basalt, the pathway will loop through the Flour Mill to offer views of the machinery and end at one of the main viewing platforms set upon the water’s edge.

As the walk continues, the next section will manoeuvre through the promenade and between the old woollen mill, which will be stripped back inside to create a large public hall. The extension of these structures will be transformed into the industrial site's visitor's centre.

Both the mill and the visitor's centre will spill out onto the new Public Yard, where the historic wooden carpentry shop will be restored to host public performances and a variety of events, festival and activities can be held in the surrounding space. 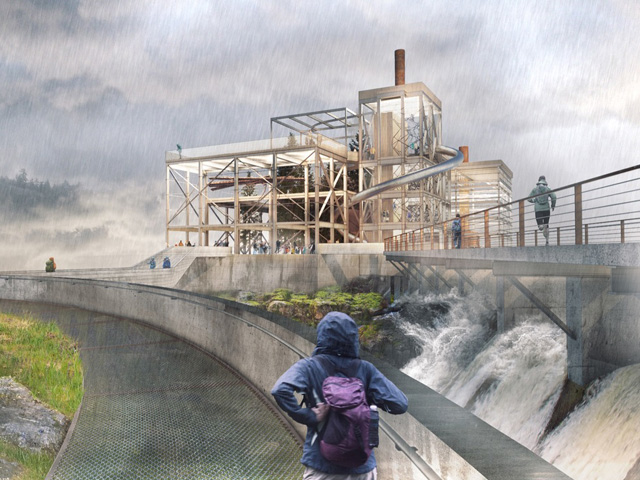 To ensure that the youngsters of the area are kept entertained year-round, a section further along the path will be dedicated to a children’s play tower. The existing structure will be stripped back and the exposed steel beams will be incorporated into the play structures design. The area will also have space for two lookout points for the waterfall. Both staircases and elevators will lead to these spaces, ensuring multi-ability access.

The final section of the complex will feature several raised paths suspended over the river and the PGE Dam, with the designed emphasising the height of the falls.  The path ends at the final falls lookout – the Hawley Powerhouse Foundation – which will provide a 360-degree view at the centre of the river and the falls. 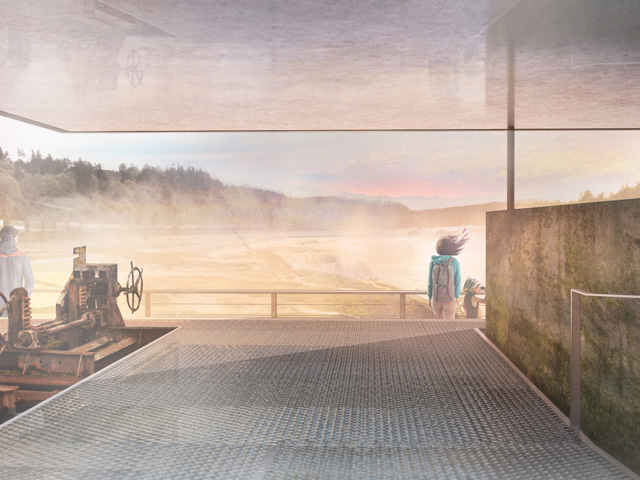 “Collectively, the Riverwalk sequence opens a new chapter in the life of the site, one that reimagines Willamette Falls in its fullest, most expansive depth in nature, culture, and time,” summarise the architects.

The project is scheduled for construction from 2018 and is the result of a two-year design process that took care to involve the ideas of locals and city representatives.