Our preoccupation with removing vehicles from city centres continues this week with an idea from PLP Architects that would see cars driven underground to free up ground level space for parks and pedestrians. 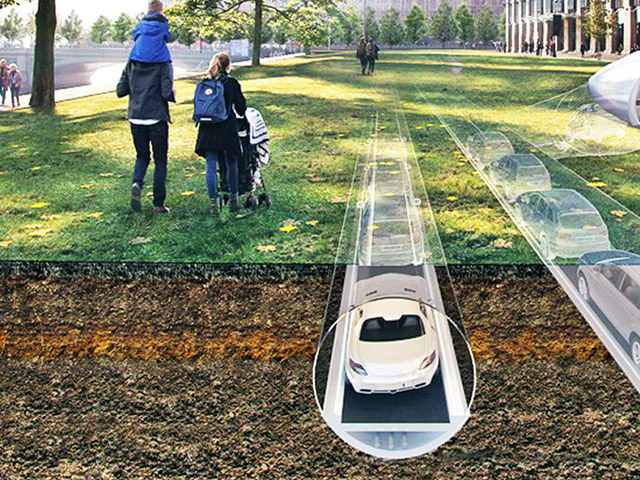 Imagine how peaceful our cities would be if we took honking, idling cars off the road and put them underground – not to mention the cleaner air!. PLP Architecture is proposing we do just that. The firms CarTube project proposes a network of underground tubes with massive conveyor belts that move vehicles from one place to another. They’re proposing we do away with above-ground roads altogether, freeing up space for parks and recreation. 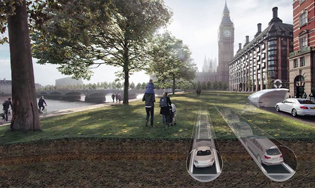 According to The Architects’ Journal, PLP has called their CarTube the “next best thing since teleportation,” by integrating the existing roadways in large cities into a network of small underground tunnels. Once there, the automatic cars would be moved along by what’s called a “platoon system,” which basically means they travel in groups that are controlled using artificial intelligence. This means the cars can travel in closer quarters since the distance required for a human reaction isn’t needed – allowing tunnels to accommodate a higher capacity of traffic.

With that in mind, PLP claims such a tube system would double a city’s transport capacity for about the same investment as your average public transit system, while also cutting down travel time by as much as 75 percent.

According to The Architects’ Journal, PLP director of research, Lars Hesselgren said the CarTube concept is a “direct response” to mass transit and traffic congestion in the world’s largest cities. “CarTube has the potential to be the next best thing to teleportation,” he said. “It will revolutionise existing cities and allow for unprecedented urban forms.”

Setting aside practical considerations – including how to manoeuvre around existing underground infrastructure and the overall cost – it’s a pretty cool idea and would make for greater community engagement in urban areas at ground level.