A pedestrian bridge with a wave-like structure that recreates the continuous form of a Möbius strip will begin construction in 2014.

Holland-based Next architects have won a competition to design a pedestrian bridge featuring a wave-like structure which recreates the continuous form of a Möbius strip. 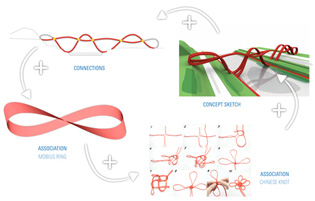 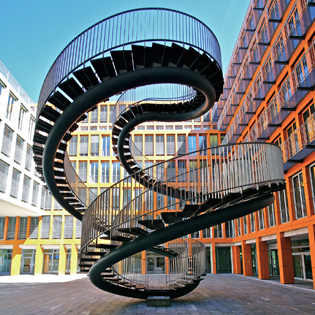 Changsa’s new bridge will be made from corroded steel which will impart a reddish colour. It will comprise a sequence of undulating steel ribbons that combine to create a never-ending surface.

With a total span of more than 150 metre and 24 metres high, the bridge will connect a diversity of routings on different heights, including one that reaches a height of 24 metres to offer views of the harbour, the city and the surrounding mountains. Lighting fixtures will highlight the profile of the structure after dark.

Michel Schreinemachers from Next said “the construction with the intersecting connections is based on the principal of the Möbius ring,” while John van de Water from Next said it also “refers to a Chinese knot that comes from an ancient decorative Chinese folk art.”

The bridge echoes a number of projects that Next has already built. Earlier this year, the team built The Impossible Stair, a circular stair sculpture that is also inspired by the Mobius strip. Similarly, Next also created a bridge in the northern part of Amsterdam with two intertwined pathways, separating bicycle and pedestrian traffic.

Construction is set to begin in 2014.